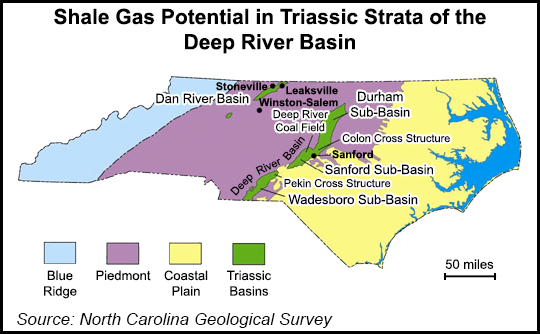 McCrory, a Republican who took office in 2013, signed SB 786, also known as the Energy Modernization Act. The bill lifts a moratorium on horizontal drilling and hydraulic fracturing (fracking) on July 1, 2015; extends the deadline for the state to develop its own regulatory program; creates a new Oil and Gas Commission, and reconstitutes the state’s Mining and Energy Commission (see Shale Daily, June 3;May 21; May 16; March 4, 2013).

“We remain intensely focused on creating good jobs, particularly in our rural areas,” McCrory said. “We have watched and waited as other states moved forward with energy exploration, and it is finally our turn. This legislation will spur economic development at all levels of our economy, not just the energy sector.”

“The expansion of our energy sector will not come at a cost to our precious environment,” McCrory said. “This legislation has the safeguards to protect the high quality of life we cherish.”

In an interview with CNBC on Wednesday, McCrory added that exploration for oil and gas could take place in “about four or five” inland counties.

“We’ve been sitting on the sidelines for a long time, while we’re having to ship in gas from other states,” McCrory said. “We believe to help jobs and to help our country’s independence we need to get in the natural gas business. We began that process today and we hope to begin doing some test wells possibly on some state property.

“[We need] to see exactly what type of natural gas reserves we have, whether it’s wet gas or dry gas, and create some more jobs in North Carolina.”

McAuliffe, a Democrat who took office this past January, signed Executive Order No. 16 on Wednesday. The order creates the Virginia Energy Council (VEC), an advisory group tasked with helping the state create a comprehensive energy plan. The council will have 20-25 members, will be chaired by Secretary of Commerce and Trade Maurice Jones, and will submit its recommendations to the state General Assembly on Oct. 1.

“Virginia must develop an aggressive strategy to protect existing jobs in our energy industries while positioning the commonwealth to be a leader in new energy technologies,” McAuliffe said. “An innovative energy strategy will enable us to attract the best businesses and entrepreneurs to Virginia, create more jobs in growing industries, and lead a 21st century Virginia economy.”

Among the VEC’s responsibilities is a requirement that the council “[develop] strategies to increase the diversity of energy used to power Virginia, while ensuring a commitment to the most efficient use of existing energy sources,” and to “[provide] expertise and advice on other policy strategies…to grow the energy industry in the commonwealth.” Both requirements could be interpreted to include shale development.

According to the Virginia Department of Mines, Minerals and Energy, more than 2,100 vertical and horizontal wells targeting shale, sandstone and limestone formations have been drilled in the southwest part of the state since the early to mid-1950s. Virginia also has more than 6,000 coalbed methane wells.