A bill filed last week in the North Carolina General Assembly would ban forced pooling and require landowner permission for oil and gas operations that disturb the surface of the land. 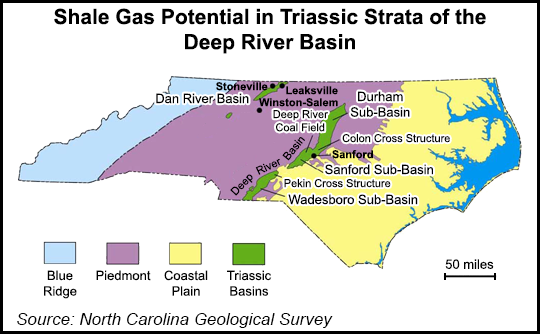 The bill, HB 586, was introduced on April 2 by state Rep. Bryan Holloway (R-King), whose district includes Stokes County and part of neighboring Rockingham County. It passed its first reading in the state House of Representatives on Monday and was subsequently referred to the House Environment Committee.

HB 586 would amend General Statute 113-393, which pertains to developing land as a drilling unit. Specifically, it inserts the language that the state’s Mining and Energy Commission (MEC) “shall not require the owner or lessor of subsurface oil or gas resources to integrate their interest with another owner’s interest or require extraction of that resource.”

Last month, 120 rules governing oil and gas development, including one lifting a moratorium on hydraulic fracturing, took effect (see Shale Daily, March 17). The rules were created by the MEC, a division of the North Carolina Department of Environment and Natural Resources, and were outlined in the Energy Modernization Act, which Republican Gov. Pat McCrory signed into law last year (see Shale Daily, June 5, 2014).

Holloway’s district lies in the Deep River Basin, which the North Carolina Geological Survey said is a 150-mile half-graben that traverses most of the central part of the state in a southwest-to-northeast direction. The basin is divided into three sub-basins — from north to south, the Durham, Sanford and Wadesboro sub-basins — each of which include about 7,000 feet of Triassic strata.