Covid-19 has upended oil and gas markets across the globe, but North America is expected to account for roughly half of the decline in global associated natural gas output this year, with a slow recovery not forecast until 2022. 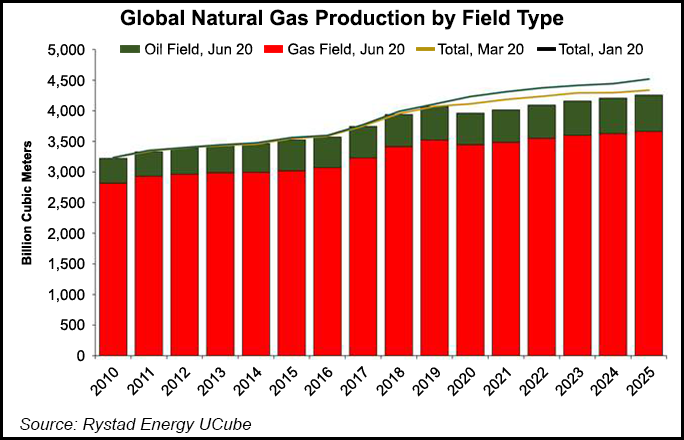 According to projections by Rystad Energy, led by researcher Carlos Torres Diaz, head of Gas & Power Markets, associated gas may decline in North America this year to 246 billion cubic meters (Bcm) from 259 Bcm in 2019. Output then is seen remaining flat in 2021. Associated gas should begin to recover in 2022 to 256 Bcm and to 269 Bcm in 2023.

Globally, associated gas output initially is forecast to stay largely flat from the 2019 level of 547 Bcm, but Rystad now expects production to decrease to 517 Bcm this year. Worldwide production is projected to rise to 530 Bcm in 2021 and to 542 Bcm in 2022, though researchers said it would not likely exceed 2019 levels before 2023.

“Part of the recovery will be driven by optimism in future oil prices, which could gradually drive output from associated gas fields to near 600 Bcm by 2025,” said Torres-Diaz. “But how future oil prices really evolve will actually define the total natural gas output.”

After plunging below $20/bbl in April, West Texas Intermediate oil prices were back above $40 this week, incentivizing some producers to ramp up shuttered volumes in the Permian Basin, the most lucrative play in the Lower 48. RBN Energy LLC indicated that Permian gas production was averaging 10.90 Bcf/d in June, up from 10.56 Bcf/d in May. However, volumes are still more than 1 Bcf/d below the 12 Bcf-plus that was flowing in April.

Hedges are expected to play an important role in future production trends, according to RBN. Since current gas prices are well below the breakeven price for most producers, gas-directed drilling, in theory, should be decimated. However, that’s not entirely been the case, the firm said.

The most recent Baker Hughes Co. rig data for the week ending last Friday (June 19) showed gas-directed rigs were down 58% from year-ago levels, while oil-directed rigs had fallen by 76% year/year.

Last year, many producers took advantage of the stronger early 2020 futures prices and sold production forward at an average price of $2.65/MMBtu, “which is a lot better than the average $1.80 realized price so far this year,” according to RBN.

“So the rig count, and thus production, have held up better than what might be expected because some producers have hedges in place that keep them in the black, especially when you consider that the cost of drilling and completion services are way down, further improving the economic viability of new gas-directed wells,” RBN CEO Rusty Braziel said.

Rystad is forecasting Brent oil to stabilize at around $60 in 2025, which drives the firm’s base case associated gas production forecast of 596 Bcm in 2025. However, if prices were to remain at the current level of around $40, there is a risk that associated production could decline to below 500 Bcm.

“On the other hand, if Brent prices were to increase toward $120, production from associated fields would see a fast recovery and have the potential to reach 800 Bcm by 2025,” Toerres-Diaz said.

ExxonMobil, which saw Permian production in 1Q2020 grow by 56% year/year to more than 350,000 boe/d, has indicated that although it expects to have only 15 rigs running in the basin by the end of the year, “the duration of these shut-ins will obviously depend on the evolving price environment.”

While Rystad has lowered its outlook for global gas demand this year to 3,883 Bcm because of the impact of the coronavirus pandemic, a jump in consumption during 2021 as a result of continued low prices and recovering economic performance could lead to a tighter balance. The firm is assuming an average Henry Hub price of $2.70/MMBtu in 2021 and an average $3.60/MMBtu price for Title Transfer Facility.

“The upside risk for global gas prices has increased as investments for projects are delayed,” Torres-Diaz said.

Meanwhile, Rystad is forecasting gas production in 2021 to average 4,015 Bcm. If demand were to increase by more than 3%, the balance could tighten significantly. “This would subsequently lead to higher prices, which could trigger a supply response.”

The Rystad outlook is similar to one issued by the International Energy Agency (IEA), which said recently global natural gas demand is on track to decline by 5% this year, largely because of the coronavirus-imposed economic contraction. The expected drop would be a record and end 10 years of uninterrupted growth.

However, demand is expected to recover as social distancing restrictions are lifted and more companies build back-up staff and operations. Winter weather later this year and early 2021 would also factor into demand, according to IEA.