The North American rig count stepped up by seven in the tally released by Baker Hughes Inc. on Thursday, one day early because of the holiday. That was enough to push the census to 1,001 for the continent for the week ending July 2. 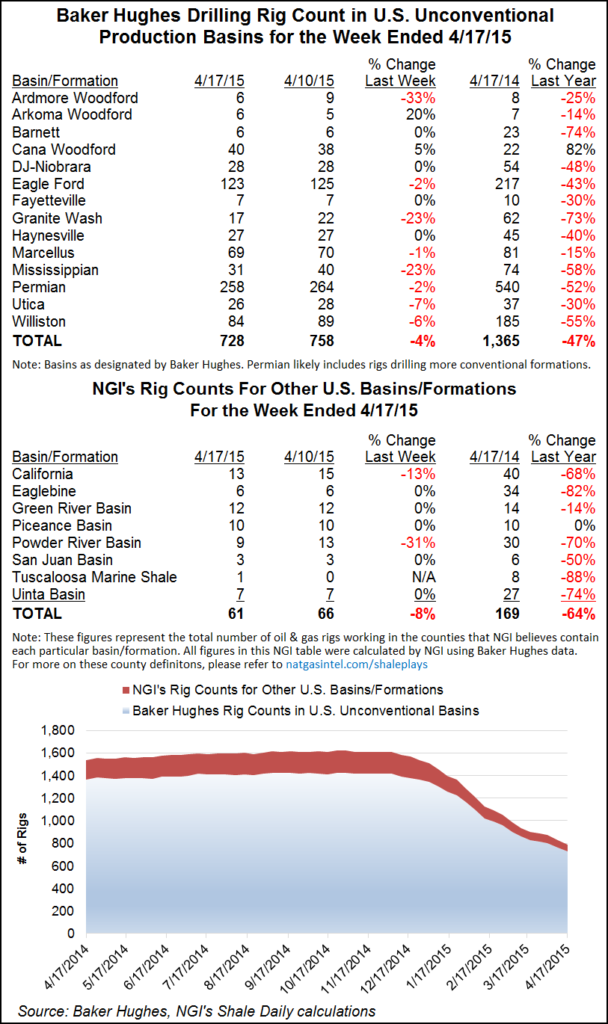 In the United States, a net of three rigs returned to action with four returning to land operations and two leaving inland waters; one rig was added in the offshore. Clearly, oil was favored as 12 oil-directed rigs were added while nine natural gas-directed rigs were lost. This scenario has been flip-flopping in recent counts; sometimes gas rigs are added and oil rigs are dropped.

The Eagle Ford Shale and the Williston Basin each added three rigs. But giving up one each were the Ardmore Woodford, Denver-Julesburg/Niobrara, Fayetteville and Marcellus shales, and the Mississippian Lime. The Granite Wash, Permian Basin and Utica Shale each added a rig, as did the Barnett Shale and Cana Woodford.

North of the border the story was the opposite. Canada added eight gas-directed rigs but lost four oil-directed units. Seven rigs were added in Alberta, and one was added in British Columbia. Manitoba now has one rig running, up from zero, and Saskatchewan lost five rigs.

Analysts at Barclays Commodities Research in a recent note gave a nod to the disconnect in rig count and well completions and acknowledged that it’s hard to get a fix on real-time producer activity. Completions in the Permian Basin are down from a year ago, they said, due to a decline in activity and a shift from vertical to horizontal rigs. This means fewer, more productive wells per deployed rig.

In the Eagle Ford Shale, oil well completions year to date are about 67% of year-ago levels, Barclays said. However, wells here are more productive, too.

North Dakota completion activity has been volatile, hitting a high in March not seen since last August but apparently trending downward since, Barclays said.

“The increased focus on productivity and the potential for accelerated well completions could support production in the near term, but the effects of the lower rig count should eventually become apparent (assuming no additions),” the analysts said.