At the end of August, Henry Hub prices surged past $10 following a meteoric rise in natural gas benchmarks in Europe and amid soaring U.S. demand. On Wednesday, the Nymex November gas futures contract settled at $6.930/MMBtu, up 9.3 cents day/day. December futures climbed 6.2 cents to $7.236. 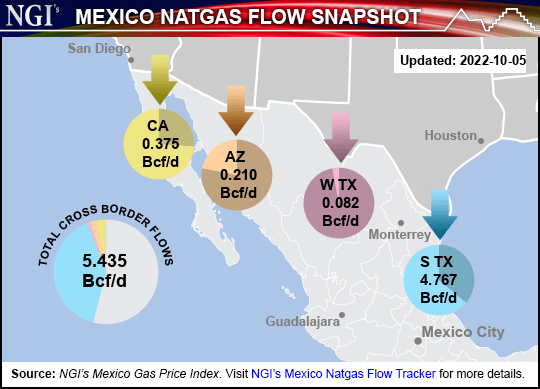 Despite a two-day rally, though, futures have dropped so low that Mexico’s natural gas buyers are now facing prices that are lower than last year. NGI’s October Bidweek National Avg. dropped $3.320 month/month to $5.460. It was below the year-earlier average of $5.495.

Earlier in the week Mizuho Securities USA’s Robert Yawger, director of energy futures, pointed out that the November Nymex contract traded to a $6.310 intraday low on Monday. That was only a half-cent above the three-month low of $6.305.

“Daily heating demand may bottom out on Thursday…before more than doubling” heading into the weekend, Rubin said. This could help support “a flagging physical market. Still, the combination of ongoing LNG outages at Cove Point and Sabine Pass, record gas production, and soft shoulder-season demand is a recipe for gigantic storage builds.”

Maintenance on natural gas infrastructure has been the theme in North America over the past few weeks. This week there were operational or maintenance issues in the U.S. Northeast, Texas, North Louisiana, and the New Mexico portion of the Permian Basin.

The Valley Crossing Pipeline (VCP) has also been undergoing compressor station maintenance at Agua Dulce and Brownsville since mid-September. “So far, the programmed capacity cuts have not had a direct, major impact on VCP exports to Mexico via the Sur de Texas-Tuxpan subsea line,” WoodMackenzie analyst Ricardo Falcón told NGI’s Mexico GPI.

“However, border flow disruptions are still possible between the second half of October and early November. As scheduled, nominations for gas day Nov. 5 will see the strongest restrictions, with the limit set at an estimated 790 Bcf/d for both Agua Dulce and Brownsville,” both in South Texas near the border.

Falcón said that seasonal downside on Mexican demand may nonetheless help soften the potential effects during the maintenance period.

On Wednesday, Mexico imported 5.435 Bcf from the United States via pipeline, according to NGI calculations. The vast majority (4.767 Bcf) came from South Texas. The data does not include intra-state trades within Texas.

Demand on Mexico’s Sistrangas on Tuesday (Oct. 4) was 4.646 Bcf, up from 4.577 Bcf a day earlier. Mexico gas production fed into the system was 1.272 Bcf. Southeast production dominated the total, with 704 MMcf from the region injected into the pipeline system.

The power sector was the biggest user of natural gas on the Sistrangas on Tuesday, at 1.431 Bcf. This was followed by the distribution segment (1.111 Bcf) and Pemex (1.078 Bcf).

In Mexico, despite the midweek rally, NGI natural gas cash prices fell week/week. On Tuesday, Los Ramones was up 37.8 cents day/day to $5.522. Monterrey via the Mier-Monterrey system rose 37.4 cents to $5.312.