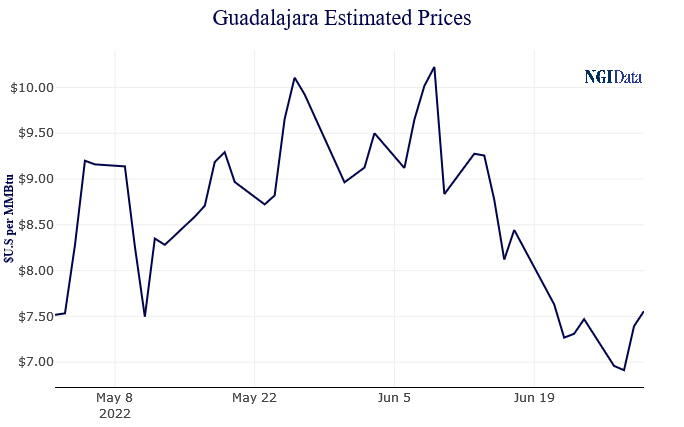 August took over as the front month contract for New York Mercantile Exchange futures this week and prices continued to be pressured downwards. On Thursday around midday, after a larger than expected injection into U.S. natural gas stocks was reported for the prior week, August prices dipped below the $6.00/MMBtu threshold.

With prices easing and additional supply now available in Texas, Mexico imports of natural gas have been robust. Het Shah of Analytix.ai said 7.1 Bcf of gas was reportedly flowing into Mexico on Wednesday. According to BTU Analytics, so far in 2022, Texas has been responsible for over 91% of natural gas exports to Mexico, followed by Arizona at 6% and California at 3%

The Mexico market meanwhile continued to be laser-focused on potential changes to the rules of the game in the transport sector. It now seems likely that natural gas marketers in Mexico will need to source their imported supplies through capacity held by state companies Comisión Federal de Electricidad (CFE) or Petróleos Mexicanos (Pemex).

A trader in Mexico City told NGI’s Mexico GPI that “there’s so much uncertainty right now.” He said he thinks “various companies are going to challenge this in courts, just as we saw in the power sector.”

Companies have until Tuesday, July 5 to challenge the changes, he said.

Cenagas issued a document this week saying that companies using Sistrangas have until August 13 to meet Sener requirements. Cenagas said that companies shipping gas on the Sistrangas would have to provide a letter from Pemex or CFE or their affiliates proving they sourced their gas from a state company or that the upstream transport was through a state agency.

Local press in Mexico reported this week that a Mexican engineering firm had won a construction contract for the 320 MMcf/d Jaltipán-Salina Cruz pipeline. The pipeline would cross the Isthmus of Tehuantepec, the narrowest strip of land in Mexico, between the two coasts.

The corridor project would link the deepwater ports of Coatzacoalcos and Salina Cruz on either side of the 77-mile isthmus. It also could include an LNG export facility proposed for Salina Cruz.

Also this week, the 340,000 Olmeca refinery in Dos Bocas, Tabasco, was set to begin operations.

Mexico’s Sistrangas five-day line pack average inched up this week, hitting 6.544 Bcf on Wednesday (June 29). The line pack is below the optimal range of 6.86-7.29 Bcf needed to guarantee sufficient pressure in the system. Line pack has been a persistent problem all year on the Sistrangas.

Demand on the Sistrangas on Wednesday was 4.636 Bcf, up from 4.526 Bcf a day earlier. Mexico gas production fed into the system was 1.277 Bcf. Southeast production dominated the total, with 716 MMcf from the region injected into the pipeline system.

In related news, TC Energía is carrying out maintenance works on the Manzanillo-Guadalajara line through July 3.

The South Central region added a net 11 Bcf into storage, which included a 16 Bcf injection into nonsalt facilities and a 6 Bcf withdrawal from salts, according to EIA. Until Mexico develops storage capability, this is the storage system most readily available to the country.