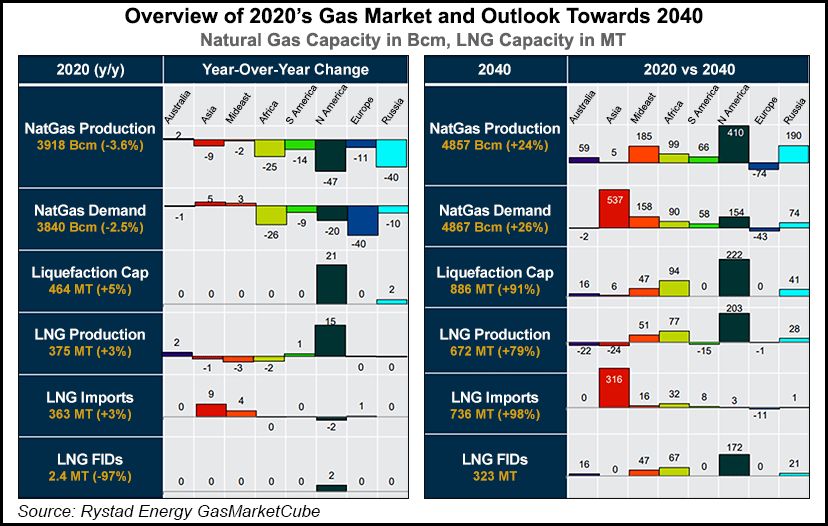 In its Gas Year 2020 review, Rystad Energy said North American gas production is estimated to have fallen 47 billion cubic meters (bcm) from 2019 levels to 1,103 bcm in 2020. Global gas output, meanwhile, is projected to have dropped 3.6% year/year in 2020, with total production at around 3,918 bcm for the year as low oil and gas prices led to lower exploration and production, according to the Oslo-based independent research firm.

Despite the widespread lockdowns that were implemented to slow the spread of the Covid-19 virus, Rystad said the low price environment shielded gas demand from a steeper decline as it became more competitive in the power sector. “Demand for gas, therefore, did not fall as much as for oil, recording only a 2.5% decline to an estimated 3,840 bcm.”

Rystad Head of Power and Gas Markets Carlos Torres Diaz said Asian demand remained “relatively strong” in 2020, while European consumption was more “severely affected,” falling 7% year/year, or by around 40 bcm. Demand in Africa was down 26 bcm from 2019.

The relative strength in Asian demand fueled a 4% year/year increase in liquefied natural gas (LNG) imports, which was driven largely by China, according to Rystad. The gain was part of a 3% year/year rise in global LNG imports, which grew to 363 million tons (mt) in 2020.

“Other buyers in the region also took advantage of low prices to substitute coal in power,” Torres Diaz said. “European imports remained strong during the first half of the year as buyers nominated less Russian piped gas.”

Meanwhile, the United States dominated the growth in liquefaction capacity to help meet that demand. U.S. capacity is estimated to have reached 71 million metric tons/year (mmty) in 2020, up 42% from 2019, with the commissioning of production units at the Cameron, Corpus Christi, Elba Island and Freeport terminals. Russian capacity, meanwhile, reached 29 mmty. Overall, liquefaction capacity grew 5% in 2020, reaching 464 mmty, Rystad said.

The United States also is expected to lead global liquefaction capacity additions through 2040, which Rystad sees reaching a total of 886 mmty, a 91% increase from 2020. U.S. liquefaction capacity may reach 220 mmty in 2040, according to the firm, while Qatar could follow with 124 mmty, Australia with 96 mmty and Russia with 70 mmty.

The world’s LNG production is forecast by Rystad to reach 672 mt by that time, a 79% growth from 2020 figures. “A spectacular rise in LNG production in the United States is expected as gas production grows, but domestic demand growth is limited,” Torres Diaz said.

For all of North America, LNG production is projected to climb 203 mt, according to Rystad, with Qatar continuing to be a key LNG player driving Middle Eastern exports. Mozambique may help put Africa back on the LNG map.

“However, more LNG production is needed to keep up with demand,” Torres Diaz said.

Rystad expects LNG imports to grow to 736 mt in 2040, with Asia absorbing most of the growing supplies in order to fuel increasing power demand. Its own domestic production is “limited.” China, India, Pakistan, Thailand and Bangladesh are seen driving the growth, while European imports could drop as pipeline imports are accessible.

Furthermore, Rystad sees European demand starting to decline in 2024 as a result of environmental policies and growth in renewables. Total demand on the continent is expected to fall 43 bcm from 2020 levels by 2040.

“U.S demand is also at risk due to new environmental policies expected to be announced by the Biden administration,” Torres Diaz said.

This view was shared by researchers at consultancy McKinsey & Co. The firm’s Global Energy Perspective 2021 report finds that peaks in demand for oil and gas may occur in 2029 and 2037, respectively.

The pandemic has resulted in a profound reduction in energy demand, from which McKinsey expects it will take between one to four years to recover, with electricity and natural gas demand expected to bounce back more quickly than demand for oil.

However, demand for fossil fuels will likely never return to its pre-pandemic growth curve, according to researchers. Over the long term, the impacts of behavioral shifts because of Covid-19 are minor compared to “known” long-term shifts, the firm said, such as decreasing car ownership, growing fuel efficiencies and a trend towards electric vehicles. The impact from these shifts are estimated to be three to nine times higher than the pandemic’s by 2050.

“While the pandemic has certainly provided a substantial shock for the energy sector across all fuel sources, the story of the century is still a rapid and continuous shift to lower-carbon energy systems,” said McKinsey senior partner Christer Tryggestad.

Nevertheless, Rystad expects global gas demand to increase by 26% through 2040, reaching a “monstrous” 4,867 bcm. Asian demand by far is seen as the largest addition, with 537 bcm growth versus 2020, as gas is needed to power the region despite growth in renewables.

The Rystad outlook is similar to that of the International Energy Agency, which said the global thirst for gas is forecast to grow more than four times faster than oil consumption. The flagship World Energy Outlook 2019 issued in November indicates the United States to lead the charge for gas production, with expectations it would add by 2025 nearly 200 bcm, or nearly 7.06 Tcf, to global production through shale and tight gas reserves. More than half of the domestic output likely is destined for export as LNG.

As for production, Rystad expects global output to grow by 24% to 4,857 bcm in 2040, with most additions coming from North America, where production is set to increase 410 bcm versus 2020 levels. Russia is forecast to follow with 190 bcm growth, and the Middle East could add 185 bcm.

U.S. production, meanwhile, could reach 1,194 bcm in 2040, driven by output from the Marcellus Shale and the Permian Basin.

“Shale production is, however, at risk due to the new government,” Torres Diaz said. “Russia, Iran and Qatar can contribute with substantial output. Europe will be the only region to decline (-74 bcm) due to lower production from Norway and the Netherlands.”