Volumes rose but prices fell across the board in the natural gas trade among Canada, the United States and Mexico during the first half of this year, according to the latest scorecard kept by the U.S. Department of Energy. 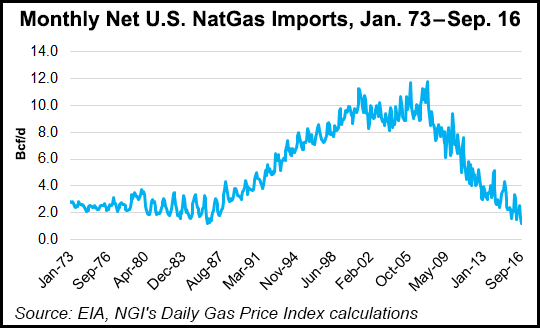 The largest item on the North American market, Canadian exports to the United States, rose by 6.9% to 1.497 Tcf in the first six months of 2016 from 1.401 Tcf in the same period of 2015, according to the department’s natural gas regulation division.

But gas sales competition driven by the shale supply gale cut the first-half 2016 average border price of Canadian exports by 45% to US$1.78/MMBtu from US$3.23/MMBtu during January through June of 2015.

But prices on the southern side of the continental market went the same direction as the northern trade. The average fetched by U.S. exports to Mexico dropped by 27.2% to US$2.18/MMBtu in first-half 2016 from US$3.00 a year earlier.

But the six-month average price fetched by northbound pipeline deliveries from the U.S. fell by 37.3% to US$2.17/MMBtu this year from US$3.46/MMBtu in the same period of 2015.

Mexican exports to the U.S. remained negligible at 400 MMcf in first-half 2016, up from zero a year earlier. The average border price of northbound Mexican gas was even lower than the Canadian average, at US$1.18/MMBtu.

As new terminals went into operation the volume of LNG exports from the United States took off in first-half 2016, jumping by 559.3% to 36.3 Bcf from just a negligible amount a year earlier.