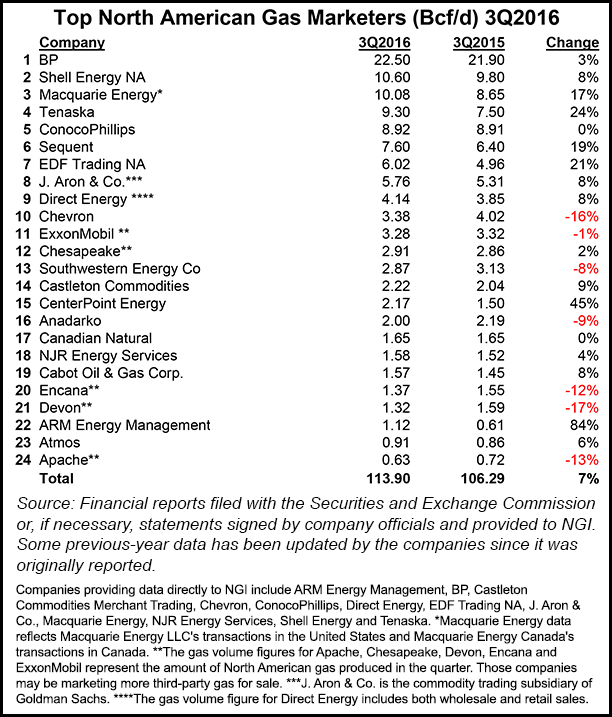 That builds upon a turnaround begun in 2Q2016, when the same gas marketers reported combined sales transactions of 111.95 Bcf/d, a 7% increase compared with2Q2015.

Marketers should have plenty of product available to move in coming months. Last week, Energy Information Administration (EIA) reported the season’s first natural gas storage draw, a 2 Bcf pull which caught some traders off guard. Inventories now stand at 4,045 Bcf and are 39 Bcf higher than last year and 241 Bcf more than the five-year average.

In addition to bulging storage caverns and expectations of a relatively mild winter, marketers are likely to see the amount of natural gas produced tick higher over the next several quarters, according to Patrick Rau, NGI‘s director of strategy and research.

“The gas rig count really didn’t start to pick up until a few months ago, and it can take anywhere from six to nine months for new wells to start having an aggregate impact on production,” Rau said. “So even if the rig count moderated from here, I’d still expect there to be a lagged impact on production growth.

“While most exploration and production companies haven’t set formal budgets for 2017 just yet, the early indications are that rigs are set to continue rising next year. No doubt associated gas production would get a boost if crude prices remain above $50, and Wednesday’s announcement from OPEC increases the chances of that, everything else being equal.

“Another thing that may lead to increased production out of the Appalachia is the start up of Energy Transfer’s Rover Pipeline, which would provide another 3.25 Bcf/d of takeaway capacity out of the region over the two construction phases that are scheduled to be completed in November 2017. Antero Resources is on record saying they would begin to ramp up their production once Rover gets the green light to proceed, since it will take time to get new wells to fill that capacity hooked up.

“You also have a bit more than 3.0 Bcf/d of capacity coming on lineout of Waha to serve gas-fired power generation in Mexico starting in 1Q17, so that might help move the needle a bit higher as well.”

Macquarie Energy reported 10.08 Bcf/d sales in 3Q2016, a 17% increase compared with 8.65 Bcf/d in the same period in 2015. At the LDC Gas Forum in Chicago In September, Macquarie Capital (USA) Global Oil & Gas Strategist Vikas Dwivedi said the natural gas market was starting to feel downright bullish, if only because some of the bearish factors weighing down prices the last few years are starting to normalize.

The NGI survey ranks marketers on sales transactions only. FERC in its Form 552 tallies both purchases and sales. Natural gas trading volumes soared 9.4% higher last year compared with 2014, likely because of continued increased production, the retirement of coal-fired electricity generators, and a probable increase in consumption because of lower prices, according to an analysis by Natural Gas Intelligence (NGI) of 2015 Form 552 filings with the Federal Energy Regulatory Commission.