The diversified systems of two of North America’s largest midstream companies were positioned for a solid second quarter in which lower oil volumes were partially offset by strength in natural gas, natural gas liquids (NGL) and storage. 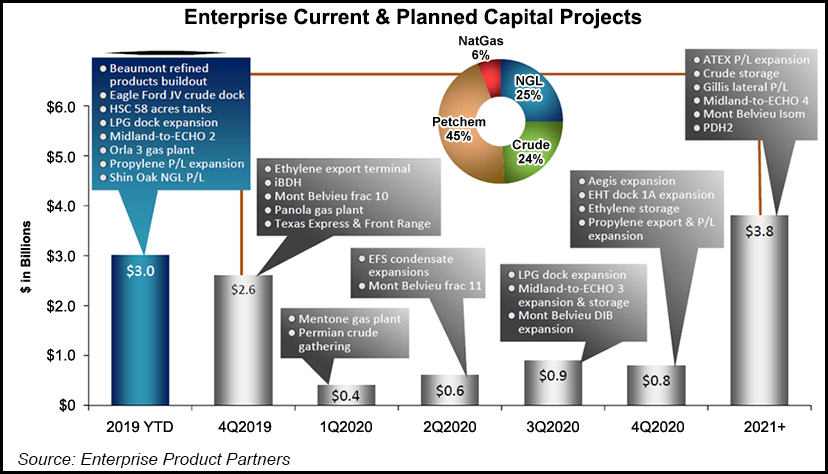 Enterprise Products Partners LP (EPD) and Enbridge Inc. reported second quarter results on Wednesday, with each company highlighting the success they have had amid “one of the most challenging quarters in the history of the U.S. energy industry,” according to EPD Co-CEO Jim Teague.

The chief of Houston-based EPD said the fee-based businesses, storage assets, marketing business and cost-control measures that it undertook earlier this year to navigate the double whammy of the oil market downturn and Covid-19 were instrumental in helping to maintain a strong balance sheet and financial flexibility.

EPD’s refining utilization rates bottomed in April at around 68%, but they have since recovered to around 80%, which supported a recovery in propylene fractionation and octane enhancement activities beginning this month. Oil and natural gas production also is increasing from the lows experienced in May, with aggregate gross volumes for the oil pipelines in July averaging around 80% of March levels.

“Based on average field operating data thus far in July, we have seen total gross natural gas processing inlet volumes and NGL production from the plants we operate recover to 88% and 98%, respectively, of March 2020 activity levels,” said the CEO.

Teague was quick to point out that while some recovery has taken place, there continues to be uncertainty over the pace and scope of the recovery going forward. In addition, “the energy industry is going through a period of significant financial restructuring that has been accelerated by the impacts of the pandemic.”

Nevertheless, EPD is forging ahead with expansion plans, with $6.6 billion in projects under construction. Earlier this year, it scrapped or deferred spending on 13 projects, including a natural gas pipeline to Carthage, TX, that was targeted for in-service this year, as well as the Gillis Lateral, an extension of the Acadian gas system in the Haynesville Shale.

However, the Midland-to-Echo oil expansion remains on schedule for start-up by the end of September, along with projects in the Eagle Ford Shale and the tanking business.

Total capital spending in the second quarter was $910 million, which included $74 million of sustaining capital expenditures (capex). For 2020, EPD expects to spend around $2.5-3.0 billion for growth capital projects and about $300 million for sustaining capex. For 2021 and 2022, however, the firm has reduced its growth capital guidance to around $2.3 billion and $1.0 billion, respectively.

Enbridge CEO Al Monaco said despite the impact that Covid-19 and the oil market downturn has had on the energy industry, “fundamentals are intact.”

The CEO said “low-cost, reliable energy underpins the global economic engine,” which is going to be critical to the industry’s recovery. In addition, future energy demand increases haven’t changed, “and that means more infrastructure and modernizing energy systems.

“You’re not seeing that reflected today yet, but that’s what the fundamentals are telling us,” Monaco said.

The Calgary-based operator saw throughput volumes on the Mainline system fall an “unprecedented” 400,000 b/d from the first quarter, but the CEO said flows are steadily improving and in line with expectations. The company’s contracts are underpinned by “strong commercial constructs,” with 95% of its customers being investment grade, he said.

Enbridge had “good utilization” in gas transmission and distribution, and higher rates kicked in on the Texas Eastern Transmission (aka Tetco) system, which also aided the strong quarterly results. Tetco remains partially restricted following a rupture on May 4 on Line 10, in Fleming County, KY. The company has returned one of the lines taken out of service following the blast and is working to restore the pipeline to full service by the winter season.

The overall liquids business performed well, according to Monaco, offsetting some of the Mainline volume decline. Like EPD, Enbridge also was able to capture “good contango gains” for its storage assets.

“Our balance sheet and liquidity are in good shape,” said the company chief. The 2020 funding plan is complete, with “ample liquidity” through 2021. Enbridge sanctioned another $1 billion of projects, and is making “good progress” on the priorities it has outlined, including Line 3 and the Mainline.

“Although 2020 has been a tough year for our sector in the industry, we’re managing it well here at Enbridge,” Monaco said.

Looking forward, he noted that gasoline consumption has picked up as economies reopen amid the pandemic, although jet fuel demand remains in the doldrums. The pace of recovery “was a little bit better than we thought in 2Q2020, but with the rising infection rates that we’re seeing today, we’re cautious on the timing of a full return.”

Monaco touted the resiliency of the refining centers Enbridge delivers into, specifically in the Midwest and Gulf Coast, which ramped up as demand returned. Barring another shutdown of the economy, Enbridge expects Mainline throughput to near 1Q2020 levels by year end, with average throughput of about 2.6 million b/d in the last six months of the year. The pick up in throughput would reflect “a slightly faster pace of recovery in demand for refined products and higher refinery utilizations, particularly in the U.S. Midwest,” according to the CEO.

Enbridge sold $8 billion in assets during the quarter in an effort to reduce costs and “simplify the corporate structure,” Monaco said. The company is targeting DCF of 5-7% growth through 2022 and intends to fully fund growth projects.

The operator remains focused on “low capital intensity revenue enhancements” and now has an inventory of about $11 billion of secured projects at various stages of execution, including $300,000 in gas distribution and storage that went online in the second quarter. About $5 billion in growth capital remains to be spent through 2022, with scheduled in-service through 2023.