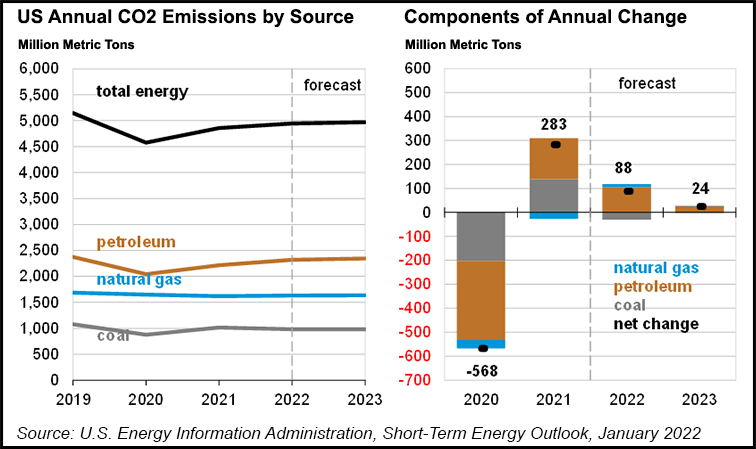 The U.S. midstream sector is involved in the development of renewable natural gas (RNG), hydrogen, responsibly sourced gas (RSG), carbon capture and other emissions-reducing projects in every region of the country. However, over the next 11 months, executives from some of the largest midstream companies said the focus is to intensify on engagement, collaboration and new partnerships that enhance the role of natural gas in the energy transition.

“Any way we look at it, global energy is going up,” said Enbridge Inc. CEO Al Monaco during the company’s annual investor day last month. “Demand is rising, driven by population, urbanization and developing countries. The supply mix is shifting to biofuels and renewables, we know that…and less coal. But oil and gas is going to continue to fuel the global economic engine. The industry, though, is showing it can be effective in reducing its own emissions. We just need to embrace the industry to do that.”

Monaco said North America is in “a great position to gain global market share” because of its abundant resources. At the same time, its energy is being produced by companies with environmental, social and governance (ESG) at the forefront of operations. Lowering emissions is a top priority.

“All of this means more supply pointed to export markets,” especially liquefied natural gas (LNG), Monaco said. “There’s a long runway for conventional energy because it will remain critical for transportation, heating, cooking, electronics, medical devices, pharmaceuticals, plastics…the list goes on and on.”

Against that backdrop, Enbridge expects its natural gas network to be a vital component of North America’s ambitions to reach net zero emissions by 2050. Enbridge’s network stretches from the far northeast corner of British Columbia to the southern tip of Texas, to Florida and into New England and the Atlantic provinces of Canada.

“We’re very bullish on hydrogen and RNG, and we’re taking action. We’re investing. But that will take time to scale up,” Monaco said.

Nevertheless, conventional energy is essential to meeting rising energy demand, according to the CEO, “and that means we need to pull all the emissions levers that we have.” These include energy efficiency, conservation, new technology and carbon capture, utilization and storage (CCUS).

To that end, Enbridge’s capital budget in 2022 is to include projects that optimize and modernize its transportation system, particularly for natural gas. The firm plans to continue adding solar capacity at its pumps and compressors, and it expects its pipelines to eventually blend hydrogen and transport RNG.

“Our transportation and storage assets will be part of making this happen,” Monaco said.

The Calgary-based midstreamer has plans for a carbon capture and storage hub near Edmonton. Meanwhile, as part of its $3 billion acquisition of the Ingleside Energy Center in South Texas from Moda Midstream Operating LLC, it committed to achieving net negative emissions by developing a 60 MW solar facility onsite.

“But what’s really important strategically is getting the pace of transition right,” Monaco said. “That means you’ve got to be aligned with policy and economic signals. Not too far ahead, but you can’t be behind.”

Policy, though, oftentimes can be a bone of contention for the industry.

Williams CEO Alan Armstrong told NGI his company continues to advance solar projects while leveraging its existing infrastructure to incorporate renewable energy. It also is pursuing opportunities in RNG, hydrogen and carbon capture, along with supporting the growth of RSG  for LNG export.

Armstrong said the management team gained an “enhanced perspective” of natural gas markets following the acquisition of Sequent Energy Management LP last year. “We are clearly seeing a need within the marketplace to demonstrate responsibly sourced natural gas, not only within our footprint but to also work with upstream partners and our downstream customers to really track the full lifecycle emissions footprint,” he said.

Indeed, global LNG customers are demanding that producers track and mitigate the emissions tied to their operations. More than 100 countries signed the Global Methane Pledge to cut emissions by 30% by 2030 at the United Nations’ Conference of Parties, aka COP26, climate conference in November.

Still, “an ongoing challenge for our industry and our nation,” according to Armstrong, “is the polarization about the best way to achieve a clean energy future.”

“It’s unfortunate and ironic that these types of sweeping no-fossil fuel mandates actually will increase emissions and perpetuate the use of high carbon fuels like heating oil and diesel,” Armstrong said.

The division is causing the United States to “miss opportunities that would have a significant impact on emissions reductions both in the short and the long term,” according to the company chief. Natural gas, he said, provides a “right here, right now” emissions-reduction solution that is “economically viable and can keep industry and manufacturing here at home.

“The focus should be on taking advantage of today’s opportunities and not stopping fossil fuels altogether, which is not a practical solution.”

Notably, Williams’ largest natural gas asset, the Transcontinental Gas Pipe Line, aka Transco, earlier this month delivered an all-time record amount of natural gas. In order to meet the record demand, the company utilized the incremental capacity added to the megapipe over the past year. In 2021, it nearly tripled contracted throughput on Transco to around 18.7 million Dth/d from 6.6 million Dth/d in 2008, primarily through incremental growth projects along its existing footprint.

Leidy South was the most recently completed expansion project to maximize the use of Transco’s existing corridor. The project carries about 600 MMcf/d to Atlantic seaboard markets.

An Interstate Natural Gas Association of America (INGAA) spokesperson told NGI the ongoing uncertainty in the regulatory permitting and decision-making process continues to hamper its members’ ability to build infrastructure. The organization is made up of 26 member companies that operate almost 200,000 miles of pipeline in the United States and Canada.

Additionally, INGAA views the proposed tax on oil and gas methane emissions currently being considered by Congress as harming consumers and the reliability of the U.S. electric system. The fee would start at $900/metric ton starting in 2023, increasing to $1,200 in 2024 and $1,500 for 2025 and each year thereafter.

“INGAA member companies take great care to ensure that the new energy infrastructure our nation needs is built and operated in a way that benefits and protects local communities and the environment,” the spokesperson said. “We firmly believe that our industry’s community-focused approach to developing and operating energy infrastructure promotes equity and opportunity across the U.S.”

A priority for the natural gas industry in the year ahead, according to INGAA, is to protect the statutory and regulatory framework that allows it to develop infrastructure in a safe and timely manner and to continue to meet energy needs. “To do this, we as an industry must continue to improve and amplify our communications, outreach and engagement and ensure all stakeholders understand both the value of natural gas and the current and future energy needs of our nation.”

With climate goals at the forefront of operations, 2022 is set to be a constructive year for the midstream sector following a period of strict financial discipline and limited development, according to Alerian’s Stacey Morris, director of research.

The oil and gas industry is in a more “normalized environment” following the worst of Covid-19’s impacts, Morris said. The midstream sector, in particular, has shown the strength of its business through one-off events like Winter Storm Uri and through continued execution amid the ongoing waves of Covid-19.

Financial restraint was a tough lesson for the industry that won’t be soon forgotten. Ongoing debt reduction remains a focus for some companies in 2022, according to Morris, as does free cash flow generation. Notably, the third quarter of 2021 brought the first quarter with no dividend cuts across Alerian’s midstream indexes.

“Companies that needed to reset their payouts have largely done so, which should stave off cuts,” she said.

With the improving macro backdrop, there even is the potential for dividend increases. For example, EnLink Midstream LLC said last month it would increase its distribution by 20% for its 4Q2021 payout. Morris noted, however, that while some firms that previously cut dividends may up payouts more substantially this year, most midstreamers would likely grow dividends more moderately.

Share buybacks also are gaining momentum. Enbridge has set aside C$1.5 million ($1.2 billion) for a stock buyback program, while Plains All American LP is targeting up to 25% of the budget for repurchases. Kinder Morgan Inc. and Targa Resources Corp. are keeping their share repurchase plans closer to the vest, each indicating any buybacks would be “opportunistic.”

“There’s different approaches” to buybacks, Morris said, “and everyone wants to be very measured.”

Meanwhile, the Omicron variant of the coronavirus has proven to be “not as worrisome,” according to Morris, and shouldn’t lead to a substantial slowdown in activity within the industry. While prior variants like Delta led it to “take some pause,” the headlines in 2021 reflected stable demand recovery and a robust export story.

“The energy crisis in Europe helped reinforce the fact that we’re going to be dependent on fossil fuels for some time,” Morris said.

Over the next 11 months, there is more time to focus on project development, with no shortage of possible technologies for midstreamers to explore. RSG should “take a little more form,” Morris said, as more stringent standards to quantify pollutants are verified by independent third parties. Equitable Origin, MiQ and Project Canary have certified, or are in the process of certifying, a combined 32 Bcf/d of natural gas production in the United States and Canada.

Kinder Morgan is looking to offer certified gas services on one of its major conduits. Last month, it filed a proposal with federal regulators for service to enable gas suppliers on the Tennessee Gas Pipeline system to sell RSG to customers.

Other technologies may take longer to develop. Morris said it’s still a little early for carbon capture to take up any meaningful portion of midstream budgets overall. For its part, Enbridge said its planned CCS project near Edmonton likely won’t come online until 2026.

Renewable fuels should generate continued activity, according to Morris, but size matters. Having the assets and capabilities to take on projects are key for broader development, she said. “If you’re operating and producing assets already, you can move carbon to areas where it can be sequestered as well. The Gulf Coast isn’t a bad footprint.”