Pressured by global oversupply wrought by the coronavirus and the price war, most North American producers have slashed their capital spending on average by 35-40% year/year versus original guidance, but revisions globally are playing out differently, according to Evercore ISI. 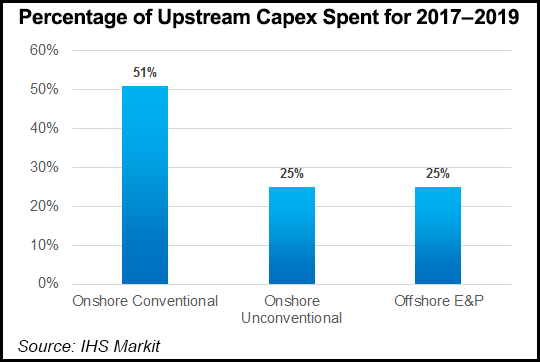 The analyst firm in its sixth Budget Barometer this year tracked 88 exploration and production (E&P) companies with an estimated $230 billion of capital expenditures (capex) scheduled around the world. Analysts are “fairly certain” that the directional change of negative upstream capex revisions globally is going to be down by 31% from 2019.

“For North America, ”40 is the new 30’ as a number of companies made further cuts to reflect $20 West Texas Intermediate and also due to the short-cycle nature of unconventional shale oil and gas,” Evercore analyst James West said. “Nothing is sacred in this downturn with nearly all regions impacted as we now project international spend to decline 20%-plus.”

West said he was “highly suspicious” of E&Ps reducing capex by 30% while only curtailing a “fraction” of production. Oilfield services (OFS) financial models are showing that at a minimum revenues are declining less than 15-20% year/year for 2020.

Rystad Energy recently said global E&Ps would be able to reduce only around 12% of supply chain costs from efficiency and productivity gains. OFS pricing makes up around 9% of the 12% in costs.

“Operators cannot rely on the supply chain to help them make uneconomic production and projects economic again in the very depressed oil market,” Rystad Energy’s Audun Martinsen, head of energy service research said. “This time around, the global oversupply and the demand destruction from Covid-19 will have to be resolved to get project economics back on track.”

The last industry downturn triggered a cost-cutting wave to improve efficiencies, resulting in total cost compression of around 37%, according to Rystad. Within the Lower 48 plays, the cost compression was as much as 45%, and for offshore it was around 40%. In addition, cost savings also have resulted from changes to design, downsizing and currency gains.

The OFS providers “barely had room to give leading up to this ”Worst of Both Worlds’ downturn,” West said. “The sum of our coverage universe’s revenue is indicating a 15% year/year decline for 2020,” versus a consensus of 11%.

Many may be waiting for 1Q2020 earnings reports to issue further retreat in capex spending. The earnings season is set to kick off later this month.

“The truth is that from an energy supply chain perspective, the spread of Covid-19 is causing major disruptions to operations in almost all major oil producing countries around the world,” West said. “The biggest hit will likely unfold in the second quarter as operations virtually cease in many countries.”

In addition, international oil company (IOC) spending may not be resilient, according to Evercore. During the downturn that began in late 2014, the majors and IOCs cut capex by 20% for two years in a row (2015-2016).

“There is a high probability of this happening again, and it’s worth highlighting that the majors have cut spending by 19% year/year for 2020 and 21% against the prior plan,” West said. “We anticipate shale spending will be slashed while some major offshore projects, such as Guyana and Suriname push forward.”