Natural gas prices continue to languish and oil prices have failed to strengthen despite recent geopolitical events, indicating more North American energy operators may face restructuring or bankruptcy through the first half of 2020, according to Haynes and Boone LLP. 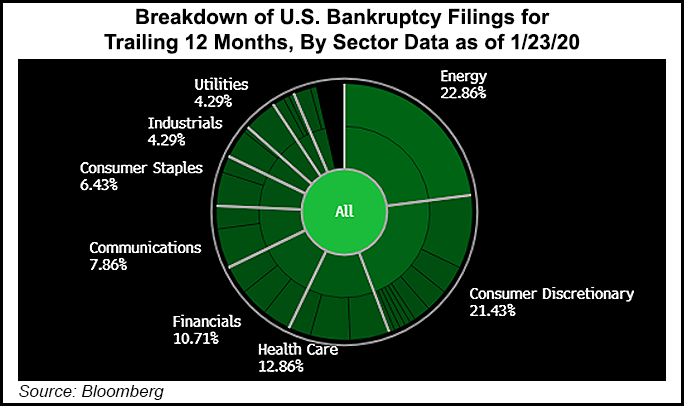 The law firm, which has monitored North American oil and gas producer bankruptcies since 2015, this month issued a compilation of activity since that time, when operators were forced into restructuring after being stung by a collapse in oil prices. Through at least the first half of 2020, conditions appear bleak.

“Entering 2020, commodity prices appear to remain challenging for producers,” researchers said. “Natural gas prices fell by over half in 2019 compared to 2018, with little expectation in the near term for any price improvement. The oil market appears to be resistant to sustained increases in spite of two major geopolitical events…”

Last September, Saudi Arabia’s oil infrastructure was attacked, causing one of the largest-scale oil supply disruptions in decades. The drone attack briefly sent Brent and West Texas Intermediate futures surging, but the gains were short lived. Following attacks said to be orchestrated by Iranians on the U.S. Embassy in Baghdad, a U.S. drone attack earlier this month killed a top Iranian general. Again, crude prices reacted and moved higher, but the increase was not sustained.

Following the collapse in oil price that began in late 2014, there were more than 100 bankruptcy filings in 2015 and 2016 by exploration and production (E&P) companies, many burdened with high debt and little cash flow. The number of bankruptcy filings then stabilized somewhat, falling to 24 in 2017 and to 28 in 2018.

During the final three months of 2019, nine E&Ps filed for bankruptcy with an aggregate amount of more than $12.6 billion of total debt.

“This increase in year/year filings indicates that the reverberations of the 2015 oil price crash will continue to be felt in the industry through at least the first half of 2020,” researchers said.

EP Energy Corp., which filed for bankruptcy last October, had the most secured and unsecured debt, totaling about $7.34 billion. Approach Resources Inc., which sought protection in November, was second with total debt estimated at $3.69 billion, followed by Legacy Reserves Inc. and its affiliates with $2.62 billion; Legacy filed for protection in June. Sanchez Energy Corp. filed for bankruptcy in August with total secured and unsecured debt estimated at around $2.28 billion.

Not surprisingly, given its size and significance in the oil and gas business, Texas had the most E&P bankruptcy filings between 2015 and 2019 at 94, with an estimated $68.68 billion in total secured and unsecured debt. There also were 32 voluntary filings over the period in Delaware, where many companies are incorporated, with total debt of $25.21 billion.

Eighteen Canadian E&Ps also filed for bankruptcy protection between 2015 and 2019.

In Colorado and in Louisiana, 11 E&Ps in each state filed for bankruptcy from 2015 through last year. There also were 10 E&Ps headquartered in New York that sought protection, as well as six in Oklahoma and five in California.

The domestic midstream sector has fared better over the past five years.

From 2015 through the end of 2019, 28 U.S. midstreamers had filed for voluntary Chapter 11 protection that involved around $21.6 billion in cumulative secured and unsecured debt. Earlier this month, Kingfisher Midstream LLC, an affiliate of debtor producer Alta Mesa Resources Inc., also filed for bankruptcy.

For oilfield services (OFS), whose fortunes are tied to their E&P and midstream customers, the total amount of aggregate debt in bankruptcies from 2015 through 2019 totaled $66 billion, according to the data. From 2018 through last year, the OFS filings decreased in number and aggregate debt from 2017.