North America exploration and production (E&P) companies should increase their capital spending by 20% in 2022 as they lock up equipment and labor in an ever tightening global market, Halliburton Co. CEO Jeff Miller said Tuesday. 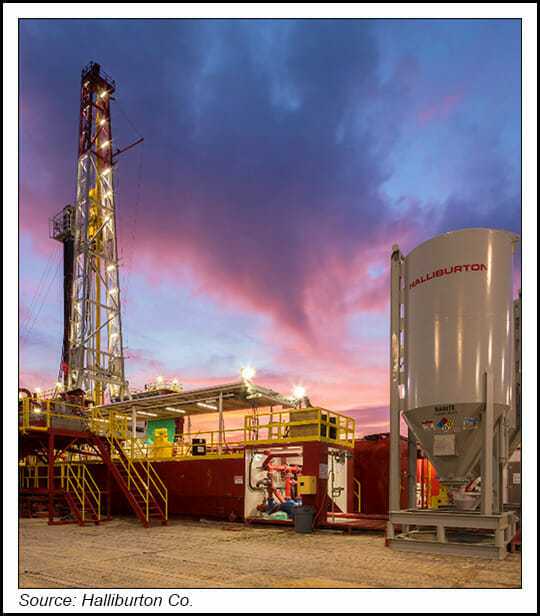 The No. 1 completions expert in North America kicked off earnings season for the oilfield services sector in an early morning call with investors, setting the tone for what to expect in the next few weeks.

“I see a multi-year upcycle unfolding,” Miller said. “Structural global commodity tightness drives increased demand for our services, both internationally and in North America. I believe Halliburton is uniquely positioned in both markets to benefit from this improving environment.”

In North America, there is “customer urgency, equipment tightness and a desire to align with a reliable and differentiated service provider like Halliburton.”

The Houston company is gaining “pricing traction” for not only low-emission equipment, but also price increases for the rest of the fracturing fleet. Net pricing climbed during 3Q2021 beyond fracturing services, for drilling, cementing, drillbits and artificial lift.

Equipment is being repositioned in North America to capture the most value heading into 2022, Miller said. In addition, Halliburton is “securing longer term, premium pricing contracts for existing and planned electric fleets.” Fleet maintenance has been accelerated too, and the company is deploying next-generation technology to extend equipment life.

As it commands a huge market share in North America, “I expect we will benefit more than others as activity and pricing momentum. momentum accelerates across the board,” said the CEO.

More E&Ps during 3Q2021 began moving beyond drawing down their backlog of drilled but uncompleted wells, or DUCs. The drawdown has been the modus operandi for many public North American E&Ps to keep capital expenditures (capex) at bay. With the surge in commodity prices, though, capex and activity are beginning to surge.

During 3Q2021, the North American DUC well count “reached the lowest level since 2013, as operators depleted the surplus…accumulated in 2020.”

E&Ps also are coming to the negotiations table to begin the 2022 tender process earlier, as they attempt to “lock in access to quality services for next year’s programs.”

Notably, the private E&Ps in North America, unfettered by investor scrutiny, have led the way in capital spending so far, Miller noted. There is continued “bifurcation in activity levels” between the public and private E&Ps.

“Public E&Ps remain committed to their spending plans for 2021,” Miller said. “All private operators continue to take advantage of this strong commodity price environment.” The privates “now operate about 60% of the U.S. land rig count. Current commodity prices provide a strong incentive for their activity to expand.”

Why Are Supply Chains Stretched?

There are plenty of issues to deal with, as energy demand escalates worldwide. The tight market has squeezed global supply chains, while the labor force has dwindled.

Like many global companies, Halliburton is dealing with “stretched supply chains, tight labor and inflationary pressures,” Miller said. However, there is strength in size. The company’s “sophisticated supply chain organization” is boosted by Halliburton’s heft which may give E&Ps better opportunities to secure equipment to expand development.

In addition, “the labor market is tight today,” but Halliburton has dealt with similar issues in the past and “knows how to navigate it,” Miller said. “Over the last few years, we compressed our onboarding time, strengthened our national recruiting network and used digital solutions to significantly reduce our field personnel requirements.”

There are “real challenges,” said the CEO. However, “we have the scale, speed and systems to recruit talent nationally and quickly deploy it for our customers.” In addition, “we have ready access to a fleet of drivers to make deliveries to the job site.”

Beyond North America, international activity also is accelerating, Miller said. “Large tenders remain competitive, but we are already seeing modest price increases on discrete work in underserved markets.” As in North America, “lower spending by service companies for more than a decade” has led to “tightening equipment supply” overseas.

There also were increased completion tool sales in the Gulf of Mexico (GOM), and additional stimulation and drilling activity in Canada. Partially offsetting the increases were reduced drilling-related, wireline, and stimulation activity in the GOM as a result of the impact from Hurricane Ida.