The number of North American oil and natural gas producers filing for bankruptcy protection continued to slow in December, but 2020 remains a standout in the six years that Haynes and Boone LLP has been tracking bankruptcy data. 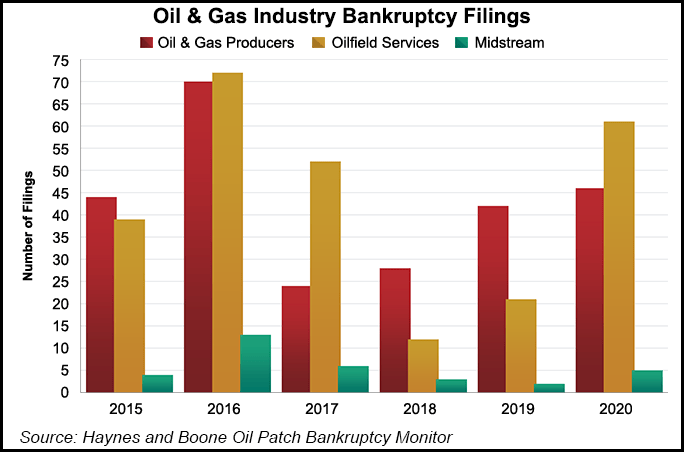 The law firm’s latest Oil Patch Bankruptcy Monitor showed that since the oil and gas industry began contracting in late 2014, 2020 was the worst. Forty-six exploration and production (E&P) companies representing around $53 billion in total debt filed for bankruptcy protection last year. This is around 30% of the total debt represented in bankruptcy filings since 2015, the first year Haynes and Boone began tracking data.

“The aggregate debt (secured debt and unsecured debt) for North American oil and gas producers in 2020 was comparable to the record 2016 levels,” the law firm said. “Importantly for commercial banks and other secured lenders, secured debt increased substantially from 35% in 2016 to 46% in 2020.”

Texas accounted for 67% of the total producer filings in 2020, with 31 in total. This included the lone bankruptcy filing in December, Reddline Energy Inc. Delaware was the second most popular jurisdiction with six filings in 2020, according to the law firm.

The past year also brought about an increase in billion-dollar bankruptcies, with 14 being filed. These included Chesapeake Energy Corp., Ultra Petroleum Corp. and Unit Corp. Fifty-four billion-dollar filings were filed over the six-year period, Haynes and Boone said.

“There is a very close inverse correlation with oil prices and frequency of bankruptcy filings,” according to the firm.

While one to two filings were recorded in each of the first three months of 2020, six E&Ps filed for Chapter 11 protection in April, the same month that oil prices crashed to a historic low of minus $37.63/bbl. Filings reached a fever pitch in July as nine producers sought protection, with 46 recorded for the full year, Haynes and Boone said.

Looking ahead to 2021, the worst of the recent downturn may be in the rearview mirror. E&Ps are ready to get back to business, with spending likely to ramp from the doldrums of 2020. Consultancy Evercore ISI recently completed a comprehensive analysis of about 250 of the world’s top operators using a combination of internal documents and conversations with various players.

“For the first time since 2018, E&P spending is poised to increase both in North America and internationally with almost all geographic regions anticipating growth,” said Evercore analysts.

The latest drilling activity data by Baker Hughes Co. appears to reflect the improved outlook, with a surge in oil-directed drilling led by the Permian boosting the U.S. rig count for the week ending Friday (Jan. 15). The rig count jumped 13 units higher to 373 for the period, including 12 oil-directed rigs and one natural gas rig.