Nabors Industries Inc., the largest onshore drilling fleet operator and the biggest supplier of pressure pumping equipment, is not optimistic about seeing gains in the U.S. oil or gas patch through the rest of this year, CEO Tony Petrello said Wednesday. 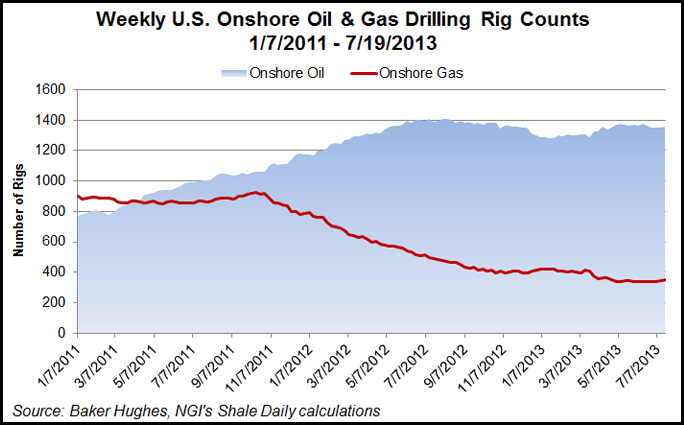 The Bermuda-based provider earlier in July had said it expected to report a “pronounced” shortfall in the pressure pumping and top drives segments (see Shale Daily, July 11). That shortfall was confirmed. Net profits from continuing operations were higher at $29.3 million (8 cents/share), versus a net loss of $98.7 million (minus 34 cents) in 1Q2012, but they were well below the first three months of 2013, when profits were $97.2 million (33 cents).

Pricing power for onshore services has been undermined by the decline in U.S. gas drilling, with the domestic gas rig count falling in June to an 18-month low, which in turn led to a surplus of drilling equipment. Problems in the second quarter were compounded by severe weather in Canada, including flooding in Alberta, as well as a “weather-included” drop in eight Bakken Shale fractionation spreads, Petrello said.

“These developments have dampened our full-year outlook and mask a number of positive developments that support our continuing expectation of improving results in the second half of this year,” said the CEO.

The outlook for Canada remains “tepid,” he said. However, “the longer term promise” of liquefied natural gas (LNG) exports from the west coast of British Columbia “are beginning to emerge. This operation recently deployed four rigs for early phase LNG-directed drilling, which will likely grow into a much greater requirement for deeper rigs in the various British Columbia gas fields over the next few years.”

Nabors is seeing improvements in utilization “at a measured and disciplined pace” as the third quarter progresses “in order to avoid adversely affecting spot market rates. The rig count in the Lower 48 portion of this operation has increased by 18 from the mid-February low point of 165 rigs to 183 rigs on revenue today, only four of which were new PACE-X deliveries. This represents an eight-rig increase from the second quarter average of 175 rigs on revenue.

There were some gains in the Gulf of Mexico operations on increased platform and workover jackup activity, he noted. However, the gains weren’t enough to compensate for the onshore. “Similarly, Alaska should see seasonally softer results for the balance of 2013, with an improving outlook in 2014 and beyond as activity improves following the recent favorable tax revisions.”

Operating income from the drilling and rig line fell $35 million from the first quarter to $102 million. Completion and production operating income declined by $13.4 million sequentially to $30 million.

“While the outlook for the third quarter is more favorable, with significant increases anticipated in both segments, the fourth quarter is usually characterized by lower results because the onset of winter and holidays limit available work days,” said Petrello. “In addition, certain customers appear increasingly concerned that a fourth quarter slowdown may result from efficiency gains depleting budgets at a faster than planned pace.”

The North American drilling market “remains uninspiring” through the rest of 2013, he said.

“Completion services continues to suffer from a large overhang of capacity and, while industry activity is increasing, an apparent inflection in efficiency is limiting any upside in the near-term. Pricing appears to be stable in the northern regions, but remains very competitive in South Texas and even more so in the Permian Basin. While the third quarter is expected to show marked improvement, visibility remains quite limited for the foreseeable future absent any improvement in natural gas and liquids directed activity.”

Nabors expects 2Q2013 to be the “low point in our results, and we anticipate a progressively upward trend over both the near- and longer term, moderated somewhat by a cautious outlook for completion services. Continuing cost and activity improvements in international drilling, seasonal recovery in Canada, return to normal operations in completion and production services, higher rig activity in U.S. drilling, and recovering order flow in Canrig will drive near-term improvements.”

The Nabors companies own and operate 472 land drilling rigs throughout the world, as well as 544 land workover and well servicing rigs in North America. The actively marketed offshore fleet consists of 36 platform rigs, five jackups and four barge rigs.

Domestically, both onshore oil and natural gas drilling rig counts have been stagnant for months. There were 1,356 onshore oil rigs and 354 onshore gas rigs in operation as of July 19, according to Baker Hughes Inc. data.