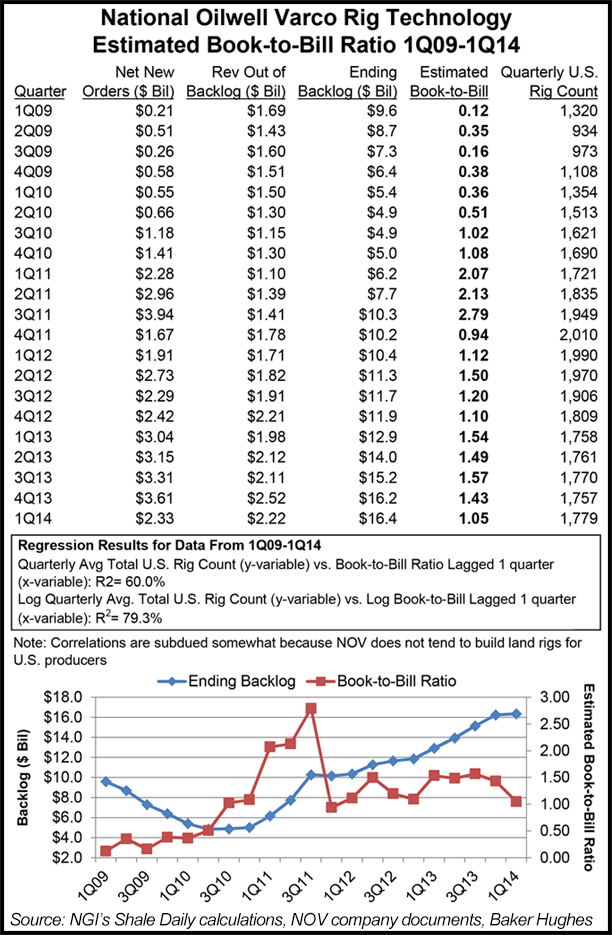 The Houston-based provider designs and manufactures most of the technology now used worldwide, offshore and onshore. However, while net profits rose 9% from a year ago, they dipped 10% sequentially. Revenues also increased year/year but were down 6% from 4Q2013. The sequential decline was attributed to fewer offshore contracts, not a lack of onshore demand, Williams told analysts during a conference call.

However, the backlog for capital equipment orders within the rig technology segment hit an all-time record of $16.35 billion, up 1% from the fourth quarter, and up 27% from a year ago.

“These are the workhorses that make our industry steadily safer and more efficient, and enable profitable unconventional resource production. Land drilling contractors appear to be increasingly convinced of their superior economic returns.”

Management has been “encouraged by recent orders for stimulation and pressure pumping equipment in North America. Frack spreads continue to be pushed harder, pumping larger fracks into more stages and higher pressures, and many are now being run at 24 hours a day, consuming these fleets at a faster pace.

“Our book-to-bill for pressure pumping, oil tubing and wireline products all handily exceeded 1:1 in the first quarter.”

Across the company’s offerings, the second quarter “will be in the range of 1:1 book-to-bill,” Williams told analysts. “And at the third and fourth quarters, we’ll gradually drift down, leading us with an ending backlog probably in the low teens,” which he later defined as under $15 billion.

The book-to-bill ratio represents the amount of additions to the backlog, divided by the amount of revenue that was booked from backlog in that same period. The ratio doesn’t explain 100% of the backlog changes from period to period, because it doesn’t incorporate, among other things, turns business (orders taken and filled in the same period), cancellations and order push-outs. Book-to-bill ratios above 1.00 generally indicate that backlog grew during the measurement period.

More than half (52%) of NOV’s business is centered on offshore technology and services, while the balance is devoted to equipment for land rigs, workover rigs, pressure pumping equipment and floating production storage offloading (FPSO) equipment.

“This ‘other half’ of our order stream is carrying good momentum into 2014, and we expect to partly offset offshore newbuild declines later in the year,” Williams said.

“Demand for floating production products…dipped this quarter, but we believe this is simply a function of timing and that FPSO demand will increase as we move through the year, given our strong bidding activity.”