A surging North American market, particularly for U.S. land services, helped to push Halliburton Co.’s profits higher in the final three months of the year, with the outlook for 2018 looking stronger, the CEO said Monday. 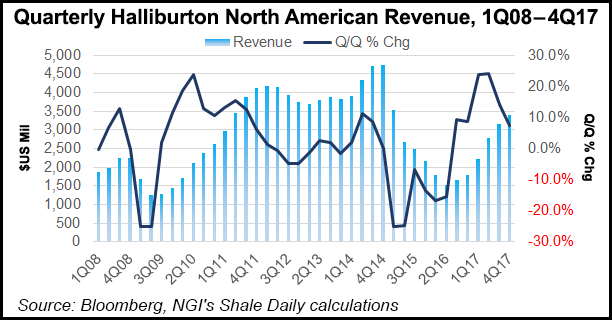 The Houston-based operator reported a 7.5% sequential increase in North American revenue during 4Q2017, primarily driven by increased utilization and pricing across the U.S. land sector in most of the product service lines but primarily in pressure pumping.

The oilfield services (OFS) giant, No. 2 in the world after Schlumberger Ltd., makes about 55% of its revenue from North America.

“Outstanding execution resulted in an excellent fourth quarter, and we are well positioned to take advantage of opportunities presented by a growing North America market and improving international outlook,” said CEO Jeff Miller during a conference call. “I continue to believe we are on the path to normalized margins in North America in 2018.

“The North America completions market is tight, and demand for our completions equipment and our service quality remains strong,” Miller said. “Commodity prices are supportive of increasing activity in North America, and I am encouraged by the increase in tender activity and the positive discussions we are having with our international customers.”

In the D&E segment, revenue was up 12% sequentially to $2.1 billion, while operating income reached $291 million, a 62% jump from the third quarter. The gains were attributed to increased drilling activity in the Middle East and North America, as well as more software sales and services in Latin America.

On the international front, business improved from a year ago and sequentially, rising to $2.5 billion. Halliburton attributed the gains across multiple product services lines to increased activity in Latin America and increases in drilling and stimulation activity in the Eastern Hemisphere.

C&P margins “were impacted by two “expected transitory headwinds in North America: seasonality and cost inflation,” Miller said. “As we expected, year-end presented some spotty activity caused by holiday schedules, weather and exhausted customer budgets.”
In addition, the fracture calendar “remained full due to the tightness in the overall market, but it came at a higher cost due to the increased idle time and mobilization required between jobs. I would rather serve our customers and capture revenue with temporarily lower margins than I would like as opposed to losing the revenue entirely…”

“The price of sand escalated over the last few months of 2017, but I believe the increasing sand capacity particularly from localized mines, combined with our supply chain strategy, will reduce the cost throughout 2018,” Miller said. “Trucking is tight across North America and is particularly tight in areas like the Permian, where activity is strong and locations are remote.”
The headwinds “were anticipated, are transitory and are not a surprise at this point in the cycle.”

As far as 2018, Miller said, “To remove any doubt, I am confident that we will achieve our normalized margin goals…As I’ve said before, we have three levers to pull in order to achieve normalized margins, and they’re working…

“The first lever is pricing. North America completions market remains tight, and we are sold out. Therefore, we continue to push pricing across our portfolio. Improving oil price and demand for equipment provides runway for us to continue to increase our pricing through the first half of the year.”

The second lever, equipment utilization, is impactful for a company the size of Halliburton, Miller said. “We continue to place our equipment with those customers who know how to effectively and efficiently use us to increase their productivity, which improves our utilization.

“I can tell you that customers rapidly returned to work after the holidays, and we expect

Among the new products is Geometrics 4D Shaped Cutters, a line of geometric profiles to improve cutting efficiencies and control. The new water-based BaraShale Lite Fluid System is designed for working in formations containing salt layers and low fracture pressure.

Losses from continuing operations totaled $805 million (minus 92 cents/share) in 4Q2017, versus a year-ago loss of $153 million (minus 17 cents). One-time charges included $882 million from the tax legislation and a $385 million charge for Venezuela operations. Venezuela has been mired in economic turmoil, but Halliburton said it would continue to “vigorously pursue” payments from customers. Excluding the one-time charges, adjusted income in 4Q2017 was $462 million (53 cents/share).