New ways to drill old basins in North America is piquing the interest of energy analysts, who will be looking for insight into capital spending plans through the rest of 2014, and whether more mergers and public offerings are coming during 2Q2014 earnings presentations. 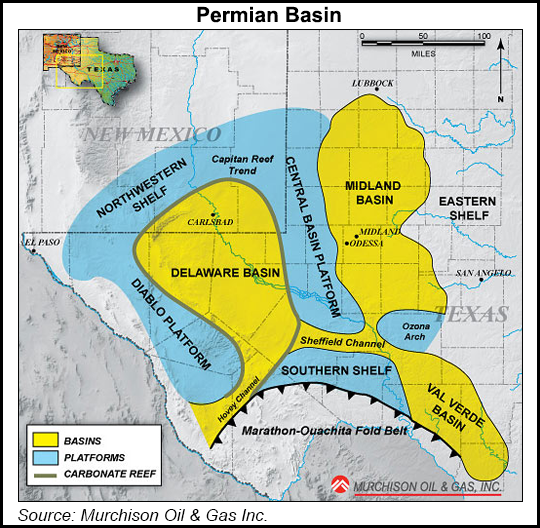 Everybody’s looking for insight into the reinvention of older basins, said Wunderlich Securities Inc. analyst Irene O. Haas. She talked with NGI’s Shale Daily about what she expects to hear and what she wants to hear during the investor conference calls.

“The massive land grab in the Eagle Ford, the Utica, is somewhat over,” so there might not be too much new information on acreage additions, she said.

“I think…the future is on the newer trends going back to reinvent older basins. “We have active hydrocarbon systems and a boatload of resource” that are being re-tapped, particularly in the Permian Basin and Wattenberg/Niobrara formations.

Three plays she’s hoping to hear more about in the coming weeks are all in the U.S. onshore: the Permian Basin’s Delaware subbasin, Wattenberg Field and the Williston Basin.

“We expect results from two Cimarex Energy Co. pilots from Culberson County: 80-acre Wolfcamp D tests and Wolfcamp C and D stacked laterals tests; to be followed by similar pilots on the Wolfcamp A in Reeves County. The northern Delaware Basin is quietly heating up.”

Haas also expects to hear more about downspacing tests and expansion to the northeast in the Wattenberg Field. “We might also hear more from the Wyoming portion of this play in Laramie County.” In the Williston Basin, “it’s been a wet spring,” she said, “and some producers might be impacted by road closure during the second quarter of 2014.”

Haas is particularly interested in how operators are producing new resources from old plays. For example, the formidable gas resources from the Wattenberg are standing now with strong oil results. The field is being hydraulically fractured (fracked) for a second, and sometimes a third time.

“To add even more drama, EOG Resources Inc. quietly has been working on the Wyoming side in a new sweet spot east of Cheyenne [WY] in the Codell/Niobrara…Producers have begun to have a handle on the play, all good and part of a natural process. This is a big deal in the Niobrara, with discoveries three times in four years.”

Operators working in older oil plays, like the Permian Basin, have found how to go into a well-established core area and rework downspacing and how to minimize their footprint.

“All of the ingenuity, technology is amazing and fun to watch,” Haas said. “We are actually seeing a new generation of geoscientists and engineers” designing ways to reenter old plays.

“At the beginning of the year, we were naively thinking all of the money would be spent by year-end” in the Delaware subbasin. “Now, halfway through the year, the boys and girls are really getting into it. Things still are all over the map,” and there’s not yet a “clear understanding” of every bench within every subbasin.

“Right now, considering the maturity of where we are in exploration projects, it’s still very early on. I expect to see more positive surprises…Now it’s the land of the ‘big boys'” such as Devon Energy Corp., EOG, Anadarko Petroleum Corp. and Apache Corp. And “they don’t talk” much about what they are doing. Finding out what’s happening in the quarterly results should prove interesting, she said.

Patrick Rau, who directs strategy and research for NGI, said he thinks “sentiment seems to be improving for the offshore drillers, but some of the gassier E&P names may struggle a bit to reach 2Q2014 consensus earnings, given the fall-off in spot market prices the last few weeks.

“Might some of these gassier companies take down their 3Q guidance?,” he asked.

Rau also is looking for comments from Bakken Shale producers about the impact of the merger of Whiting Petroleum Corp. and Kodiak Oil & Gas Corp., which would create the largest operator in the play (see Shale Daily, July 14).

Rau, like Haas, also will be listening in for more information about recent developments in North Dakota regarding huge oil production reports and increased gas flaring.

“I want to hear the same for Colorado operators in the wake of potential drilling restrictions in that state,” Rau said.

U.S. oil/liquids-rich activity has strengthened as E&Ps catch up from a slow start at the beginning of the year on weather issues, said Wunderlich’s Jason A. Wangler. He said Thursday he’ll be looking for insight into U.S. growth in the oil markets, and whether natural gas activity could improve on higher prices.

Tudor, Pickering, Holt & Co. (TPH) analysts expect to hear some insight into 2014 E&P and exploration and appraisal (E&A) spending. Analysts now think U.S. E&P spending could fall by 17% this year after dropping 6% in 2013. The representative sample group is of 29 operators.

“For the majors, we forecast a 14% fall in E&A capex and for the large E&Ps, it drops by 27% with the large U.S. independents in particular cutting back,” said analysts. The “highest expectations” are among oil services, including Baker Hughes Inc., which issued its quarterly report on Thursday. The “main near-term worry heading into earnings” is macro/oil prices, and in particular, contango of the Brent curve.

Societe Generale analyst Breanne Dougherty said “production outperformance is a term that has become all too familiar to the gas market, lessening the surprise of this year’s loudening whispers.” The Energy Information Administration’s drilling productivity report “shows oil and gas shale plays are delivering ‘more with less,’ infrastructure build-out is creating new connections in and out of Marcellus every day, and producers show no signs of slowing onshore programs” (see Shale Daily, July 14).

“Everything points to more,” Dougherty said. “While the pace of gas growth has lessened relative to the robust days of 2011/2012, its existence at all given the dramatic retrenchment in gas-targeted drilling speaks to the depth and breadth of North America’s gas supply story.

For the oilfield services (OFS) sector, and engineering and construction (E&C) operators, it’s all about “managing great expectations,” said TPH analysts. Baker Hughes Inc. issued its results on Thursday, followed by Schlumberger Ltd. on Friday and Halliburton Co. on Monday.

“Stocks in most oil service subsectors, particularly those with notable exposure to the improving North America onshore oilfield activity landscape (e.g., land drilling pressure pumping…) have had phenomenal runs,” with share prices up 50-90% over the last year.

Second quarter earnings season “is a particularly important one for the oil service industry as we expect to get a true gauge (i.e., lack of 1Q2014 winter weather disruptions) of how U.S. onshore oilfield activity levels have trended in recent months, which will help frame the second half of the year’s OFS activity/pricing backdrop.”

The “group think” is domestic onshore is “good, offshore bad” with “completions intensity and drilling/completions price increases feel impending, etc…While that does give us pause, we also think it’s right.”