The oil market’s price correction may pause the North American supply “party,” but it won’t bring it to an end as the roaring 2020s kick off an era of even more abundance than earlier forecast, the International Energy Agency (IEA) said Tuesday. 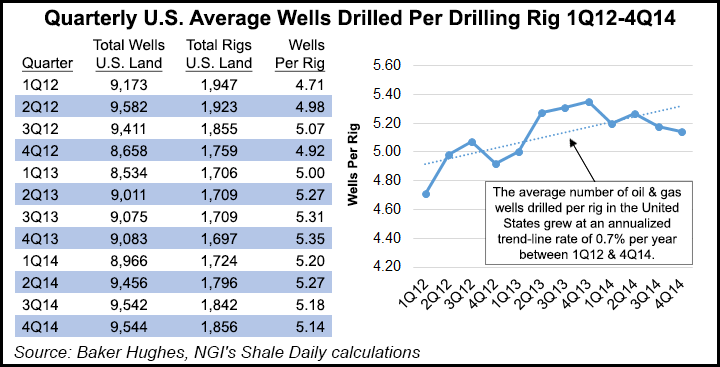 The recent crash in oil prices is expected to rebalance the world market in ways that challenge traditional thinking about the responsiveness of supply and demand, IEA Executive Director Maria van der Hoeven said in London, where she unveiled the Medium-Term Oil Market Report 2015. IEA issued its previous forecast eight months ago, before the downturn in the market (seeShale Daily, June 17, 2014).

“Everything about today’s oil market is a bit different,” she said. “While there have been drops and price corrections roughly every 10 years since the price shocks of the 1970s, there has never been a situation like what we are facing today. Of course, there will be a rebalancing of the market. But the rebalancing may not be what we have grown to expect. This time around it is not business as usual.”

Most significant has been the impact of U.S. light, tight oil, or LTO, which has unlocked a resource that had seemed off limits not that long ago.

“At the end of the day, North America’s unconventional production will loom even larger in total supply than before the price drop,” van der Hoeven said during a press conference. North America “remains the backbone of non-OPEC growth” to 2020.

IEA’s forecasters took some of their cues on expectations for the U.S. oil market from what happened as domestic natural gas production began to surge.

“Although the last few months have seen a dramatic decrease in drilling rigs and drilling permits in the United States, these may not necessarily translate into a commensurate slowdown in growth due to efficiency gains and operational discipline,” IEA said. “The experience in the U.S. natural gas market may be a good indicator as to how the oil market may respond to the price downturn. When natural gas prices collapsed in 2009 and 2010, natural gas production continued to grow because the producers took advantage of improved efficiencies, lower production costs, and refocusing on most productive areas.”

The United States should be the top source of global oil growth through 2020, increasing between 2014 and 2020 by 2.2 million b/d, mostly on expanding LTO, according to IEA. What IEA’s researchers also see to 2020 is a shrinking and fragmenting global oil market.

“With LTO price elasticity keeping the United States firming in its role as a major provider of oil supply growth, North America will continue to source more of its crude locally,” van der Hoeven said. “This will have the effect of backing out seaborne imports, even as China and the Middle East continue to ramp up refinery throughputs. The Middle East will export less of its crude and will keep more to refine at home, both to meet domestic demand and to export as products.

“The result of these changes will be a continued shift of the global oil market from crude to products, with contraction and fragmentation in crude markets mirrored by expansion and globalization in product markets.”

By 2020, Asia and the Middle East are expected to be “locked in an even tighter energy embrace than today.” It is a different world than it was in the 1990s, 1980s “or any time before,” van der Hoeven told the audience at International Petroleum Week.

“This has profoundly upended the traditional division of labor between OPEC and non-OPEC countries. This shift in underlying market conditions will result in a different form of readjustment to the price drops than what we have seen in the past. Usual logic suggests that the faster the rally in price, the more severe the inevitable correction. This much as proven true once again — after years of sustained record prices, the decline was indeed severe.”

Signs point to this recovery being different because U.S. LTO has made supply outside OPEC “far more price elastic,” van der Hoeven said.

OPEC’s decision in November to let the market rebalance itself “may have effectively turned LTO into the new swing producer. But it will not drive it out of the market. LTO might in fact come out stronger. This is our medium-term forecast in a nutshell. Because let us be honest. The oil market of 2015 is not the oil market of 1986 or indeed of 2008. U.S. LTO has changed the rules of the game.”

Under the medium-term forecast, domestic LTO growth should slow significantly in response to low prices. “This drop will not be the only form of supply response, but it will be a large piece of it,” van der Hoeven said of U.S. oil production. “And cuts in LTO investment will be faster to translate into actual supply cuts than those in other projects with longer lead times. Much for the same reason, LTO production growth will also be faster to come back on the rebound.”

All in, U.S. LTO should “remain a top source of incremental supply…swiftly regaining momentum later on. Questions do remain about the availability of capital to LTO producers, but relatively speaking, any investment cutbacks are not expected to have a long-lasting impact.”

OPEC should succeed in regaining a larger market share in terms of global supply, “but only up to a point,” van der Hoeven noted. IEA does not expect OPEC’s share of global oil output to “revisit the high levels reached before the financial crisis of 2008-2009.”

Nearly 90% of OPEC capacity growth is seen coming from a single country: Iraq. “This is not the quietest neighborhood, nor the easiest place to operate,” van der Hoeven said. The “overwhelming majority of OPEC production growth is at significant risk, depending on political instability…”

Meanwhile, Russia’s conventional production is the “polar opposite” of the United States, facing a “perfect storm of collapsing prices, international sanctions and currency depreciation,” she said. “Russia will likely emerge as the industry’s top loser with production set to contract by 560,000 b/d over the period 2014 to 2020. Unfortunately, the knock-on effects from Russia’s struggles could be significant for a number of countries in the region.”

As with previous reports, the price assumptions (not forecasts) used as modeling input were derived from the futures curve, which averaged roughly $55.00/bbl for 2015, ramping up gradually to $73.00 in 2020.

“These prices suggest that participants expect the market to recover somewhat as it rebalances following cuts in upstream investment,” IEA said. “Despite that improvement, the market does not seem to be expecting prices to revisit earlier highs any time soon. Not only have prompt prices collapsed, even price expectations for the back end of the curve have been significantly downgraded.”