North America’s oil and gas industry is “coming off the bottom,” but the recovery is unlikely to be a straight line, Halliburton Co.’s financial chief said Tuesday. 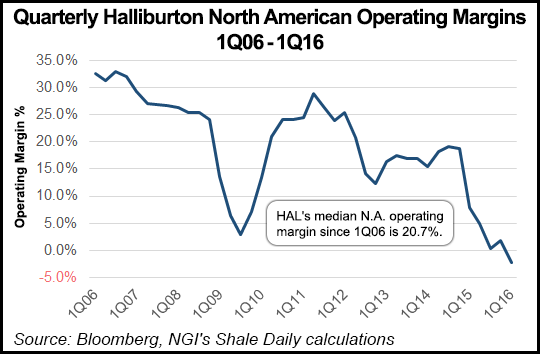 “We think at this point in time in the cycle in the market…we’re coming off of the bottom…at least in North America and [we’re] approaching a bottom internationally,” he told the audience. “But the “recovery itself is going to be a lower slope recovery than maybe some others have been. And in that regard, it’s probably not to going to be a straight line for the fact that this was a supply-based downturn and…relatively low demand growth overall…”

Because North America is now is world’s swing energy producer, he said, with “relatively little energy policy, a free market and a lot of access to capital…the recovery itself may be somewhat choppy because you have shorter cycles here…Those kinds of things call for you to be variable, as variable as you possibly can to be capital light, so that you can flex more rapidly with the changing dynamics of the market. This type of market calls for more vertical integration rather than horizontal integration, being able to spread fixed cost over greater revenue base. And then that’s going to inform our strategy as we go forward…”

North American unconventionals “are the first mover” in the coming recovery, McCollum said. “They are the cheapest, fastest barrel to market and so they become the swing barrel, the incremental barrel out there. We also think that in this type of recovery, with a lower potential price environment, that mature fields production enhancement, brownfield type projects, probably increases in priority among our international customers portfolios…But clearly deepwater, even though it is still an important market out there, is somewhat structurally disadvantaged at least for the next couple years.”

Halliburton plans to continue to build out its unconventionals business, but for the near-term, it will put capital equipment investments for deepwater on the back burner because customers aren’t asking for them. There’s also a question about how permanent the decline in oilfield costs will be once commodity prices strengthen. Halliburton and its peers have made deals to find and keep customers during the downturn, which at times has meant little to negative profit.

“It is certainly intended for those costs to be permanent,” he said of lower costs to drill and complete wells. “We call them structural because most of these things are…Variable cost around labor with crews…always comes out when revenues fall off and the work’s not there. It is easy to get that type of cost out, whether it’s people or commodities or raw materials or things. The harder part is always the back office. It is the fixed cost, the infrastructure to support operations that gets built in.”

Now that business has slowed, Halliburton has begun to change its North American maintenance structure and has eliminated “entire layers of management, both at the district level in the field, as well as in the back office across our national markets to strip out and create a more lean infrastructure behind the scenes. Every function, every product line leadership team, every region has had targets that they’ve had. It is probably 1,000 different projects that we’re going after, but they’re all fixed in nature.”

As the recovery unfolds, Halliburton’s goal is to keep its North American margin above 20%.

“I’d like us to get into the mid 20s, but we need some help from our customers to provide a little pricing to do that, and we recognize that we didn’t get there in the last upturn,” the CFO said. “We got close. I think we hit about 19.5% at the peak. And there is nothing obviously structural around the way the industry operates today that you change the ability to get there. We didn’t have a whole lot of pricing in the last up cycle. A lot of it was really designed around utilization of equipment.

“We designed our work to try to work 24 hours a day, seven days a week and to maximize that utilization to limit the amount of fixed cost burden that we’re applying to the business overall. As we go into this next cycle, hopefully having cut this billion dollars of structural cost out…would suggest that about 50% to 55% of that cost should accrue to the benefit of North America and the rest of it to our international markets.”

“Our view is that the rig count doesn’t have to go back to 1,900 rigs,” with perhaps 1,200 to 1,300 rigs able to achieve full utilization of Halliburton’s equipment. While the rig count in North America has shown signs of life in the past few weeks, it’s not a sign that the recovery is underway.

“It now is clear the data points have gotten more encouraging, and I think that that’s changing the conversation,” McCollum said. “The conversation itself has been more constructive about future activity.” But “the market is still looking for more conviction that these prices will hold in there and that…with constructive data points, things get better. It would be wrong to say that the data points have already resulted in a meaningful change in work,” he said.

The second quarter “is going to be an ugly quarter, and in line with what have suggested on our first quarter call, in terms of activity being down and even margins probably being down as well” (see Shale Daily, May 3).Additional rigs are expected to “stand up between now and the end of the year. Our view always has been that [a crude oil] price is in the $50 to $55 range began to coax out some additional rigs that probably get folks working down their DUC [drilled but uncompleted well] inventory and will help us for getting better utilization of the equipment that is active in the field itself.”

Prices aren’t at a level to “start pulling a lot of equipment off the fence,” he said. “If anything, prices would probably need to be about $10 higher for some period of time. So I think that would again change the psyche around what type of activity levels are going to be and so, our view is that probably is 2017 event at this point in time.”

Asked about the sustainability of current pricing and excess capacity, McCollum was blunt.

“Clearly guys, it is ugly, right? Everybody is underwater at this point in time and…that is the definition of an unsustainable market. Right? So…we are going to need some pricing relief here at some point of time. It’s really going to depend on who you are, where you are, right? For us, when we are negative…utilization actually becomes a more important factor than just price. I mean price is important, but the ability to improve the utilization on the existing equipment, which comes at a variable margin of 60% plus is a lot more dramatic than just share price. The first order of business for us is pushing the price.”

A lot of capacity is in the market that needs to be soaked up, which is going to take time.

Service intensity also is playing a role, with for instance, sand volumes up since mid-2013 by about three times per well, McCollum said.

“We’re using about 6 million pounds per well, and that on a typical fracture job is quite dramatic. The amount of horsepower per crew has gone up about 15% over the last couple years, which means there are actually fewer crews out there. Even if you look at all the stuff that is on the fence, there are dramatically fewer crews than there were few years ago to do the work that’s out there. Total sand volumes are only down about 15% from the peak.”

Halliburton has cut back but most of its capacity is mothballed and is “standing ready” once conditions warrant a return to work.

The ballyhooed Baker Hughes merger stumbled earlier this year, and while Halliburton has adjusted, its long-term strategy remains on track, said the CFO.

“We are interested in growing our franchise on a global basis to be as fully integrated as we possibly could be, targeting unconventional mature fields and deepwater as separate segments of the market. And we felt like the Baker Hughes transaction was a step toward making sure that our product and service portfolio was complete to address all aspects of that market, as well as providing some technologies that we felt were critical in growing our capabilities in those various components…

“But we’re not changing our strategy.”

Halliburton’s merger and acquisition strategy could be likened to baseball, he explained. “Maybe small ball wins…You are hitting singles and doubles either by buying bolt-on technologies or some product line extensions and things like that. The Baker deal was an opportunity…to swing for the fence but it dropped on the warning track for us. Now, in fact, it’s small ball, and so we’re going to continue to execute that.”

What that means primarily is organic growth, which offers a big return. “The fact is, we have a global franchise already and we had spent almost $1.5 billion before the downturn to build out our infrastructure in key international markets. We’ve gotten a portion of the unparalleled North American franchise and a footprint to do business, so we have the ability to continue to grow organically and to do the things that we need to do…”

In some product lines, including artificial lift and production chemicals, where Baker Hughes could have accelerated growth, Halliburton is stepping back to focus on the technologies in which it leads.

No. 1 oilfield services operator Schlumberger Ltd. is considering more integration and capital equipment services, while Baker Hughes and Weatherford Ltd. also have altered their distribution models since the downturn. McCollum was asked how Halliburton fits into the revamped equation.

“It strikes me at this point in time there is probably more differentiation between the major service companies than there ever has been,” he said. “I think from our perspective that creates unique opportunities to not just differentiate ourselves…but also to differentiate ourselves with our customer set. In terms of our strategy, always we have prided ourselves at being a return-focused company…That’s exactly what we’re going to continue to try to do.”