The operator of the Nord Stream 2 (NS2) pipeline said pre-commissioning work started Friday on the first line of the system, but when exactly service will start and the impact it might have on European energy markets remains unclear. 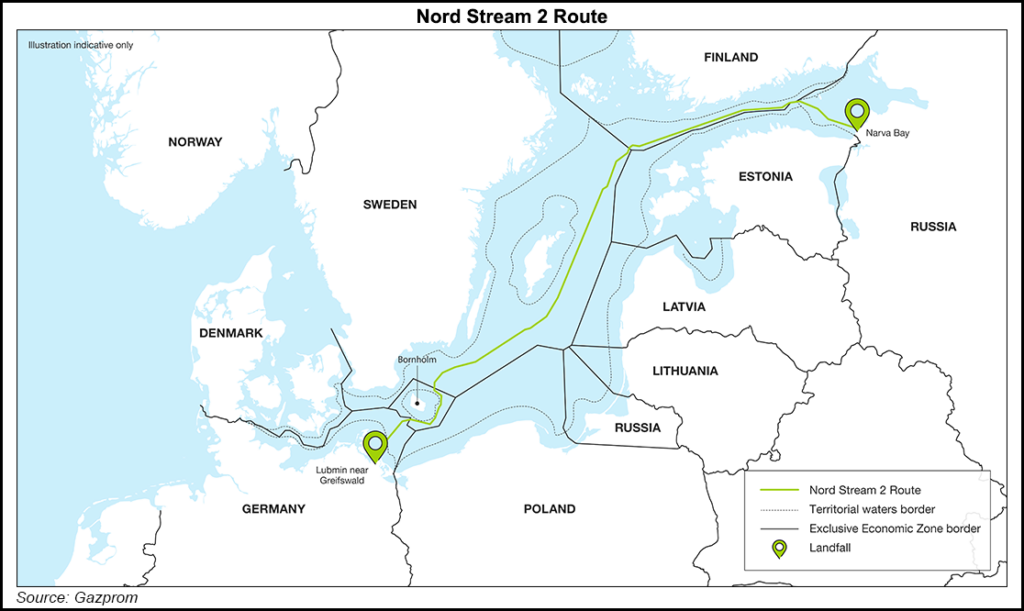 Nord Stream 2 AG said Thursday that the first stretch of the twin pipeline that runs from Russia through the Baltic Sea to Germany was finished earlier this month when pipe laying was completed. The above water tie-in was completed Thursday, the company said, clearing the way for preparations to fill the first line with natural gas.

Offshore pipe laying for the second line is ongoing, the company said. Russian President Vladimir Putin told an economic forum in St. Petersburg this month that the second line is expected to be completed by August. There are about 60 miles left to complete on that leg. He also said Gazprom PJSC would begin filling the first line once Germany approves it.

Russian officials said earlier this year that the 764-mile, 5.3 Bcf/d system could begin shipping gas by the end of this summer. NS2 would provide additional European imports at a time when storage inventories remain low after a brutally cold winter. The pipeline would also provide additional competition for liquefied natural gas (LNG) exports to Europe.

But there are differing assessments of when service will start.

NS2 has been a source of international friction, with countries like the United States claiming the line would increase the European Union’s (EU) energy reliance on Russia. The United States slapped sanctions on the project in 2019 and 2020, but the Biden administration recently waived them as it looks to build stronger relations with Europe, where NS2 has supporters.

When the pipeline is completed, it doesn’t mean service will begin, said Anna Mikulska, a nonresident fellow in energy studies at Rice University’s Baker Institute. She told NGI hurdles remain for the project.

An EU rule requiring ownership of transmission and natural gas to be separate was expanded in 2019 for pipelines to and from countries outside the bloc, impacting Gazprom’s vertically integrated structure. Under the regulations, Mikulska said, the company might have to settle for partial capacity on the system or give up operatorship and ownership of the pipeline.

She added that the threat of further sanctions or problems insuring the pipeline could also impact the service timeline as some companies might not want to take on political risks associated with the system.

Given low storage inventories, soaring carbon prices and competition from Asia, European gas prices have soared this spring. If the first part of NS2 comes online in the third quarter, there is some downside risk for European gas prices, said Energy Aspects’ James Waddell, head of European gas, but he said those forecasts are “overdone”

European prices are likely to climb regardless of NS2’s start-up, he said. Costs for the fuel will climb amid a need to refill storage and price natural gas out of the power stack to do so. The greater risk to prices, Waddell told NGI, is a quick start-up of the second line before the end of the year.

“We caution that there are still risks about how much gas you can deliver through the second line because of a number of regulatory and upstream constraints,” he added.

Rystad Energy’s Carlos Torres-Diaz, head of gas and power markets, said if the first part of NS2 comes online by August or September it could help to balance the European market. But he added that low storage inventories, which stood at 41% of capacity on Friday, remain the key factor.

“Given that underground storages need to be replenished ahead of the withdrawal season, the additional Russian volumes could come a bit too late,” Torres-Diaz told NGI. “European suppliers cannot risk waiting for these volumes to arrive to the market and will therefore continue to source LNG throughout the summer, supporting prices.”

That’s a positive for U.S. LNG exports, which are seen as vying with other suppliers such as Russia for European market share. The LNG arbitrage spread between the United States and Europe is very healthy at over $6/MMBtu through the end of the year, according to NGI calculations. The continent accounted for 36% of all U.S. LNG cargoes through mid-May, second only to Asia where a price premium this year has attracted additional spot cargoes. Asia has accounted for about 38% of U.S. cargoes.