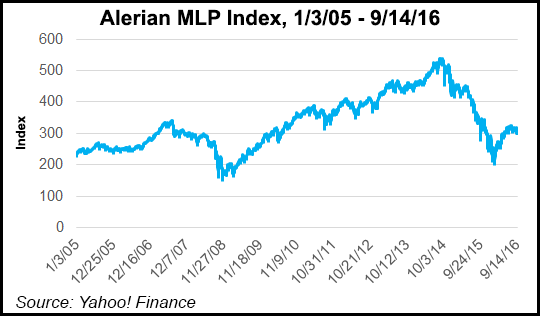 The midstream partnership also holds rights of first refusal (ROFR) to provide services to its sponsor across a combined 156,000 additional acres in the DJ, Permian and Eagle Ford. As well, it has ROFRs for “certain future acreage that is onshore in the United States outside of the Marcellus Shale.”

On a pro forma basis, Noble’s midstream business accounted for $108 million to the bottom line in 2015, with net income of almost $54 million.

Noble Midstream conducts business through long-term contracts at fixed fees. According to its prospectus, the partnership plans initially to pay about $1.50/unit per year in distributions. At the IPO pricing of $22.50/unit, the yield would be around 6.7%.

The public would hold common units representing more than 39% of the limited partner interest, or about 45% if underwriters exercised their option to purchase more units. Noble Energy would own the remaining MLP interest and all of the incentive distribution rights.

Among those scheduling IPOs, but with indefinite launch dates, is one by privately held Mammoth Energy Services Inc., an OFS whose top customer is Gulfport Energy Corp. (see Shale Daily, Sept. 8). And on Wednesday Denver-based Extraction Oil & Gas LLC, a private equity-backed producer that focuses its onshore efforts in the DJ’s Wattenberg field, filed its intentions to launch an IPO.