Noble Energy Inc. announced Thursday that it plans to spend $3.9 billion on capital expenditures (capex) in 2013, almost half of which will go toward drilling horizontal wells in the Niobrara-Denver Julesburg (DJ) Basin. 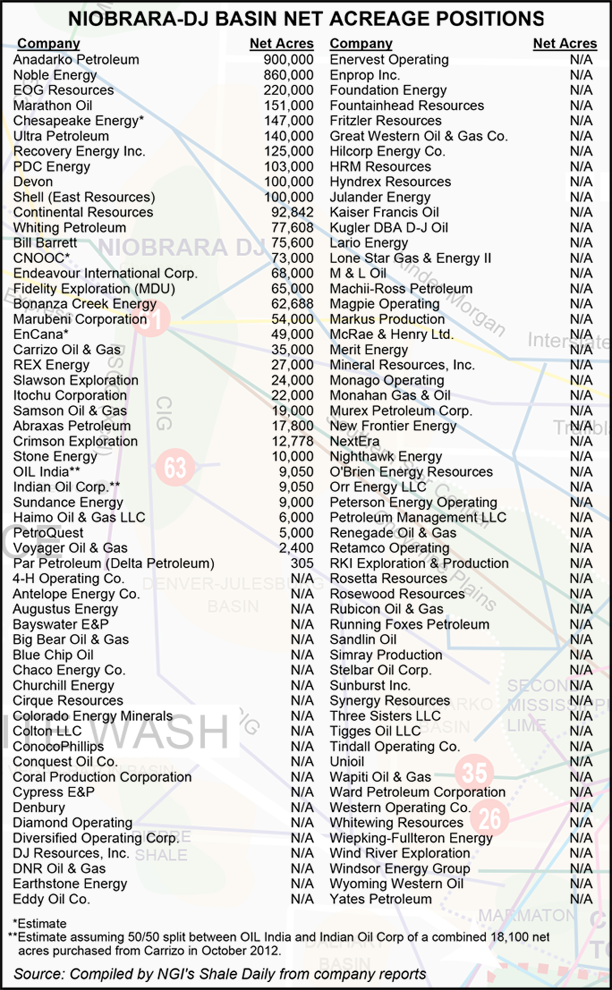 Houston-based Noble said it plans to invest $1.7 billion and will use an average of nine rigs to drill 300 wells in the DJ Basin, about 90 of which will be located in northern Colorado. Another 60 wells will be drilled with extended-reach laterals targeting the oil window of Wattenberg Field. The company said current production is almost 90 Mboe/d, with 60% natural gas liquids (NGL). Noble said it expects to exit 2013 at more than 110 Mboe/d.

“Noble Energy continues on a path of accelerating high value opportunities such as the horizontal Niobrara, which we believe is now one of the top oil resource plays in the United States,” CEO Charles Davidson said. “As a result, we are accelerating the drilling program in this area with a 50% increase in wells drilled next year.”

The company now estimates net recoverable resources in the DJ basin are 2.1 billion boe, a 60% increase over what it estimated last year (see Shale Daily, Nov. 18, 2011). Noble said it has identified 9,500 horizontal well locations and plans to drill more than 500 wells per year by 2017.

The Niobrara-DJ Basin has seen a significant increase in activity over the past 12 months, with the number of rigs in the play jumping to 22 in the week ending Dec. 7 from 13 rigs a year ago — a 69% increase — according to NGI’s Shale Daily Unconventional Rig Count.

In the Marcellus Shale, Noble said it plans to spend $750 million to support the drilling of 140 wells with joint venture partner Consol Energy Inc. (see Shale Daily, Oct. 5, 2011). The investment will target 85 operated wells in liquids-rich areas of the Marcellus. Noble said the rig count in the wet gas areas will increase to six, while two rigs will continue to work in the dry gas areas.

Noble also said it is focused on a 270-well development program in the wet gas area of the Marcellus around Majorsville, WV, where initial test results indicate better than expected liquids content and production rates. “The contribution of condensate and NGL results in a realized price of [more than] $7.00 per wellhead Mcf,” the company said, adding that it was currently delineating a second development area in the Marcellus, Normantown, with more than 200 planned well locations.

Noble said it plans to invest $250 million in the deepwater Gulf of Mexico, where it will operate a one-rig drilling appraise the Gunflint prospect and execute an exploration program there (see Shale Daily, Feb. 10). Additional capex will be spent in offshore areas near Cyprus, Equatorial Guinea, Israel, Nicaragua and the Falkland and Galapagos islands.