Houston-based Noble Energy Inc. on Thursday sanctioned the initial phase of the mammoth Leviathan natural gas project offshore Israel with first gas from the development targeted for the end of 2019. 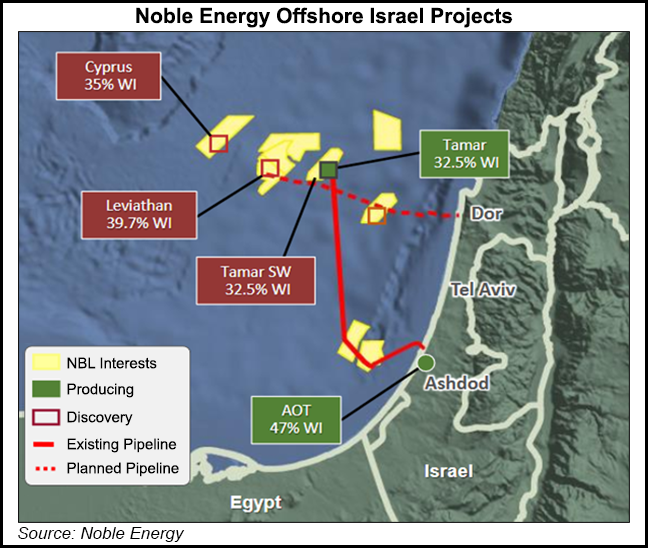 The first phase of the estimated 22 Tcf development is to include four subsea wells, each capable of flowing more than 300 MMcf/d. Proved reserves currently are 3.3 Tcf net (9.4 Tcf gross), or 550 million boe net. Noble plans to record the reserves bookings of the aptly-named project this year, which would represent a 35%-plus increase to its total reserves base.

Production from Leviathan would be gathered at the field and delivered via two 73-mile flowlines to a fixed platform, with full processing capabilities, about six miles offshore. The platform would have an initial deck weight of 22,000 tons.

Processed gas would connect to the Israel Natural Gas Lines Ltd. onshore transportation grid in the northern part of the country and to regional markets via onshore export pipelines. The approved development plan allows for future expansion from initial 1.2 Bcf/d capacity to 2.1 Bcf/d.

The super independent, which also is a big producer in the Gulf of Mexico deepwater, of late has been directing more of its capital to the U.S.onshore, and in particular the Denver-Julesburg and Permian basins. However, the Leviathan project, which drives its Eastern Mediterranean program, has remained a priority, even through the downturn.

Three years ago Noble, which operates and owns almost 40% of Leviathan, agreed to supply gas from the project to liquefaction facilities in Egypt, which at the time were owned by BG International Ltd. and are now owned by Royal Dutch Shell plc. Noble executed the nonbinding letter of intent with its partners to supply gross sales to BG of up to 3.75 Tcf, or about 700 Mcf/d over 15 years.

For the first phase of Leviathan, Noble expects to spend about $1.5 billion net ($3.75 billion gross). Of the total, Noble already spent $100 million in 2016 and has spent $200 million pre-investment for future platform expansion. Front-end engineering and design are complete, and major project contracts are being finalized. Noble also is working on long lead materials procurement.

One to two development wells are planned this year, while completion activity for all four producer wells, including two previously drilled, is expected in 2018. Project installation and commissioning should be completed by late 2019, followed by first gas delivery.

According to Noble, Leviathan blended sales price realizations for the domestic and regional markets are estimated at $5.50-6.00/Mcf based on current Brent oil pricing.