Noble Energy Inc. took the downturn and created an uplift in opportunities to provide a platform for growth over the next four years, the Houston independent’s management said Wednesday. 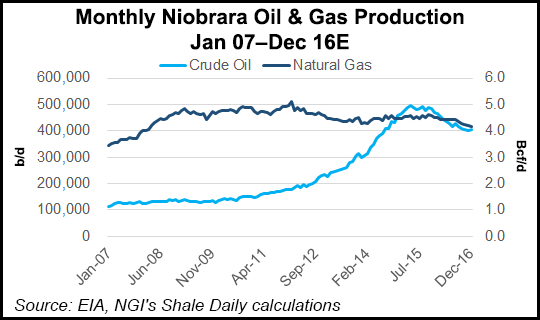 In its first long-term outlook in three years, the company offered a preview of what to expect to 2020, using a forward base price in 2017 of $50/bbl West Texas Intermediate and $3.00/Mcf Henry Hub, with a “modest oil price acceleration” through 2020. An “upside plan” would add $10/bbl in commodity price to all periods.

“We have made tremendous strides and significantly enhanced our business during the past two years,” CEO Dave Stover said during a webcast. “High-margin growth,” led by the Denver-Julesburg (DJ) Basin in Colorado, the Permian Basin’s Delaware sub-basin and Eastern Mediterranean assets, “is driving cash flows to increase at a rate of three to four times our volume growth. Our plan is fully funded and provides for additional opportunities or further acceleration, while also improving the balance sheet. Delivery of our plan is building on the momentum of significant outperformance in 2016, which is resulting in a preliminary 2017 outlook that is dramatically improved from original plans.”

After experiencing the “worst industry downturn in 40 years,” Noble didn’t “let a good challenge go to waste,” Stover said. “The dramatic fall in crude prices created an opportunity for Noble Energy, one that we’ve moved quickly and aggressively to capture…The ability to establish lasting capital in operating efficiencies while adding highly valuable assets at a discounted price has given us the competitive edge.”

“With a third rig coming into the Delaware before the end of this year and a third rig planned in the DJ by the middle of next year, we estimate that the total U.S. onshore rig count will average around seven rigs in 2017,” Stover said. “That is more than double the 2016 activity.”

In Noble’s U.S. onshore business, the base plan to 2020 delivers 23% average annual oil growth over the plan period, with the upside plan delivering nearly 30%, “driven substantially by the DJ and Delaware assets that will attract the majority of our onshore capital [and] combined production from these assets will more than double through 2020.”

Total company cash flow is expected to outpace volume growth by three or four times. Volume contributions also should be coming on strong from the Leviathan natural gas project in Israel, where gas deliverability is expected to double by 2020. The expected return on average capital employed is forecast to increase to 8-14% by 2020.

Noble has more than 7,000 future drilling locations in the U.S. onshore, with a total resource estimated at nearly 7 billion boe, Stover said. One issue that provides optimism for continued activity in Colorado was passage of Initiative 71, the “Raise the Bar” ballot item that limits constitutional amendments. Oil and gas companies had supported the initiative.

The priority going forward is to accelerate high margin asset growth, with 75% of capital to be directed to the DJ, Delaware and Eastern Mediterranean over the planning period. The Eagle Ford Shale in Texas would receive “the lion’s share of the remainder.” In the upside case if oil prices move higher, Noble plans to add more rigs and activity in the DJ and Delaware.

“Combined, the DJ Basin, Delaware Basin and Israel will grow at an average rate of nearly 20% annually in the base plan and over a 25% per year in the upside plan,” the CEO said. “By 2020, total company volumes are estimated to be 540,000 boe/d in the base plan and up to 625,000 boe/d in the upside plan. Today the DJ, Delaware and the Eastern Med comprised 40% of our total company production. These businesses grow to between 55% and 60% in 2020 through execution of this plan.”

Noble hasn’t finalized its capital budget for 2017, but a preliminary plan assumes $1.5 billion for the U.S. onshore and slightly more than $500 million for the Eastern Mediterranean.