Looming winter freezes could drive elevated demand for natural gas in parts of the northern United States, while festering drought conditions in the Southwest could fuel consumption when weather heats up next spring to offset lighter hydropower. 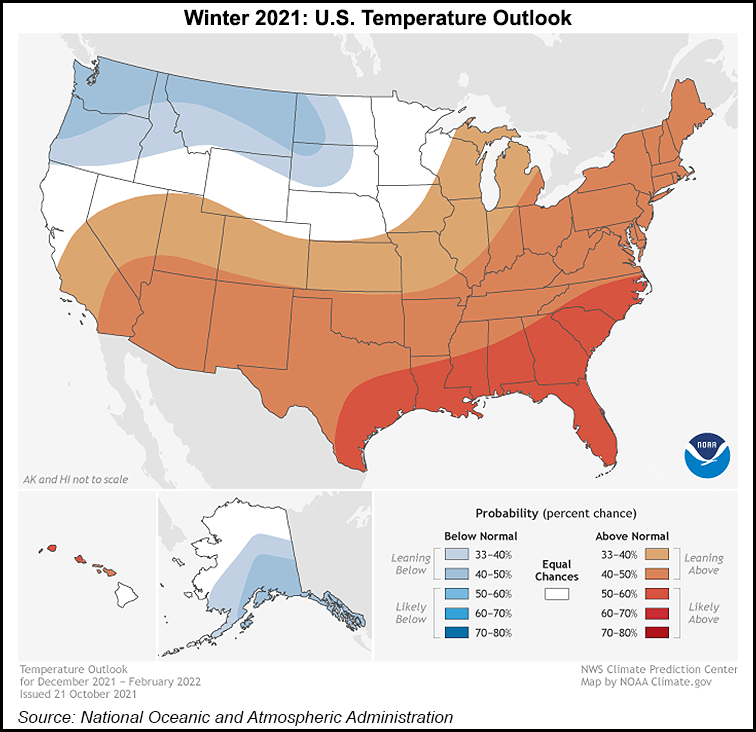 These were among the takeaways from the National Oceanic and Atmospheric Administration’s (NOAA) winter weather outlook, issued Thursday.

A swath of the Lower 48, from the Pacific Northwest into the Northern Plains, could experience a colder than usual winter, driving strong heating demand and supporting prices. NOAA’s outlook, which extends from December through February, also calls for wetter-than-average conditions across portions of the Pacific Northwest, northern Rockies, Great Lakes, Ohio Valley and western Alaska. Snowpack can intensify and extend freezing conditions.

Why Is Southwest A Region Of Concern?

Meanwhile, precipitation across the Southwest, from Arizona to Southern California, is projected to be below average, leaving the region with depleted water supplies after the winter.

Across much of the rest of the Lower 48, however, the demand outlook this winter is less impressive.

Above-average temperatures are favored across the South and most of the eastern United States as La Niña conditions developed for a second consecutive winter, Gottschalck said during a call with reporters Thursday.

Warm winter conditions in the East could minimize heating demand, while above average temperatures in the South could leave major markets with mild weather that drives neither heating nor cooling needs.

In the South and the East, the NOAA forecast showed equal chances for below-, near- or above-average precipitation during winter months.

After a scorching hot summer – and robust cooling demand — domestic natural gas markets entered the fall with some concern about adequate supplies for winter.

However, the latest build was strong relative to historical averages and kept U.S. storage on a trajectory toward balancing supply/demand ahead of winter. It marked the sixth consecutive increase that exceeded the five-year average. The five-year average for the latest report period was a build of 69 Bcf.

That noted, storage is hardly plump, said Rystad Energy analyst Kaushal Ramesh. Total working gas in storage as of Oct. 15 stood at 3,461 Bcf, 151 Bcf below the five-year average, according to EIA. In addition to summer demand, supplies have been running light because of modest production levels in the wake of the coronavirus pandemic.