Onshore explorers that boast about holding and developing the “core of the core” won’t find a fan in Chesapeake Energy Corp. CEO Doug Lawler. He doesn’t think there’s any such thing. 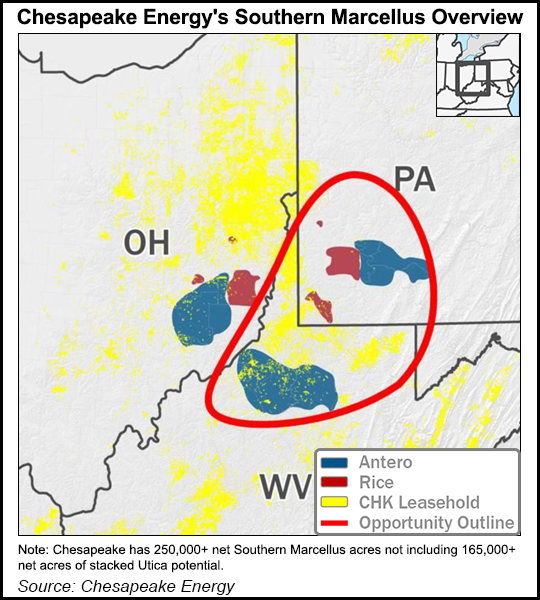 “I am an anti-core guy,” Lawler said. “When I hear the ‘core of the core,’ when…companies talk about all the great stuff around the core, all that means to me is they’ve set a finite limit on their technical ingenuity, their innovation and their drive for continuous improvement.”

A few months after he took over in June 2013, Lawler told analysts the company would no longer be driven by capturing land and holding it by production (see Shale Daily, Nov. 6, 2013). The new mantra is to test and develop selectively the quality assets and monetize some of the others. Those tests have determined that while some assets will be sold, others may be expanded.

Based on his tenure at Chesapeake, which hit the one-year mark on Tuesday, Lawler said he has become a “core expansion guy.”

It takes everybody in the company to achieve that vision, as well as “change leaders” at the organization. Chesapeake had a premium portfolio, but it was capturing little value for shareholders. Before he took over, Chesapeake’s share price rarely breached $16.00 for a long period. On Thursday at midday, it was trading above $30.00.

Creating more value takes not only technology, but empowering the people within the organization.

“No longer am I asking for ways to do it. It has taken off like crazy, resulting in huge gains for the company…”

Cutting excess and giving employees more say has in turn helped Chesapeake not only become more competitive, but it’s helped to reduce its complexity, said the CEO. “Geoscience technology-driven growth,” powered by the people is how he likes to think of it.

When he arrived, Lawler said it didn’t take long for buyers to come knocking, not with their congratulations, but with their offers to buy out the company or take over some assets at good prices. He didn’t take the bait. Instead, he said he got “underneath the hood” of Chesapeake and figured out what the company was made of.

“What I found most striking was a workforce energized to make a change, to make a difference, to be a more profitable organization.” Chesapeake at the time had about 12,000 people, but it was top-heavy and slowed by its inability to move from land capture to development mode. The workforce now numbers around 10,000. And spinning off Chesapeake Oilfield Services LLC this week, to be named Seventy Seven Energy Inc., will eliminate a few thousand more and $1.1 billion of consolidated debt from the balance sheet.

“I knew Chesapeake had great assets…” and management saw “the shale play revolution, which led us to the position we have today.” However, the company suffered from “prosperity induced indifference,” which inhibits the ability to change. “So many other companies have driven great quality from lower quality assets. It is our time to drive the greatest value from the best quality assets.”

Over the past year, billions of dollars have been drained from the capital budget. And the balance sheet complexity has been reduced. It’s going to be the “nimble independents” that prosper, and that’s what Lawler wants Chesapeake to become.

“Every single debt instrument known to man had been employed” to help Chesapeake keep operating, he said, a notable dig at co-founder Aubrey McClendon, whose ouster was in part because of sketchy financial deals. “I will tell you, we are making progress on every single front…reducing obligations and complexity…We have way too much debt, but we are making progress on it.” In just the past two years, a process begun before Lawler stepped in, debt has been reduced by about $6.2 billion.

Chesapeake now has a “crush team,” he said, which on 12,000-14,000 wells a year is designed to drive “$1 million out of every single well we drill.” Today the company has achieved improvements and is setting new recovery records “in every single field, every single well.” Over the past few months the production decline rate has improved to 27% from 30%.

All those benefits decrease the capital intensity of the existing portfolio, and give Chesapeake an opportunity to further accelerate value through development and exploration. That’s not to say that the portfolio readjustment is complete. As he did in a recent conference call, Lawler again hinted that the southern Marcellus Shale portfolio may be monetized.

An acreage package in southwestern Pennsylvania (a dry gas area) with minimal associated production is being readied for sale, as is a portion of acreage in Wyoming’s Powder River Basin (see Shale Daily, May 19). Those transactions should net about $290 million.

There’s a lot of dry gas in Appalachia — but there’s not enough infrastructure. Chesapeake also isn’t making much money because of the basis differential. “We don’t have infrastructure or we would have more development, more activity,” Lawler said. “It also could result in some sort of asset sales or some sort of spin to unlock value for our shareholders.”

Even with all of the makeover, Lawler isn’t kidding himself that Chesapeake has completely redeemed itself as a big spender but small value creator. “They doubted us at $20, and they’re going to be doubting us at $30,” he said of financial analysts still not sure of the turnaround.