With its oil and liquids-rich play, the Bakken Shale in North Dakota keeps attracting prospective drilling operations even as the formation’s overall rig count has declined slightly since January, according to the state’s latest monthly statistics at the end of August. 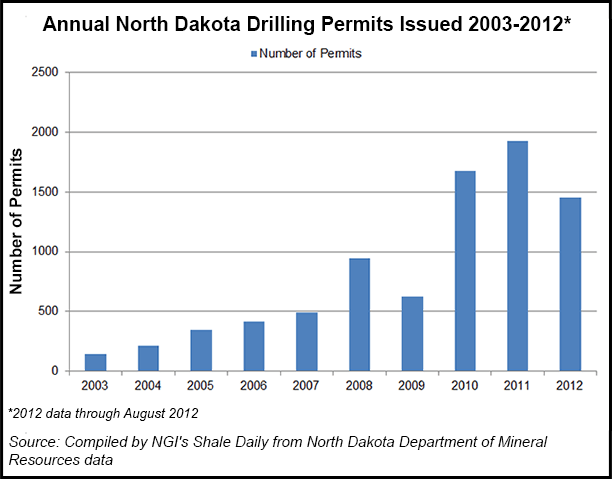 In contrast to dry gas areas such as some portions of the Marcellus Shale in Pennsylvania, where applications to drill unconventional wells have fallen off (see Shale Daily, Sept. 4), the latest monthly statistics in North Dakota show new permits surged in August, hitting a monthly high for the year at 260, compared to the second highest month — June — when there were 204 new permits issued.

Similarly in August, the number of spudded wells jumped to 275, topped only by the May total of 285 as the highest monthly total this year. Through the first eight months of 2012, monthly spuds have averaged 244, and for the last six months that average has been 256 spuds.

All of this has happened while the average rig count has gone from 200 in January to 198 in August, with a peak of 213 in July.

Nearly all of the permits issued were for new development and wildcat drilling; only two went for extensions of existing permits. For August, 253 new development permits were issued, along with seven wildcat permits, making the vast majority of the permits for more drilling in proven and heavily explored areas.

Overall, for the first eight months this year, 1,455 permits have been issued by the North Dakota Oil and Gas Division in the Department of Mineral Resources. Of that total, 1,390 were developmental permits and another 63 for wildcatting in unproven areas. Two were extensions.

Compared to 2011, the overall permit totals and developmental permits at the end of August were substantially higher, but there has been far less wildcat activity. Last year after eight months, permits issued totaled 1,203 with 1,054 of those being developmental. At the end of August that included 142 wildcat permits, more than double this year’s wildcat total so far.

Going back five years to 2008, North Dakota statistic pale in comparison to the present. At the end of 2008, the statistics showed 946 permits issued; 720 well spuds; and the average rig count at 75. More than 20% of the drilling permits were for wildcat wells in 2011.

Mexico’s antitrust watchdog Comisión Federal de Competencia Económica (Cofece) has sent a letter to Mexico’s Congress decrying proposed changes to the nation’s Ley de Hidrocarburos, or Hydrocarbons Law. “We recommend the reform to the Hydrocarbons Law isn’t approved,” President Jana Palacios said on Twitter. She suggested the proposed changes would be damaging to competition in…