A request to reconsider Mountain Valley Pipeline LLC’s plan to extend its Appalachian natural gas system was defeated on Thursday by FERC, but one commissioner was in dissent, arguing the project could negatively impact the climate. 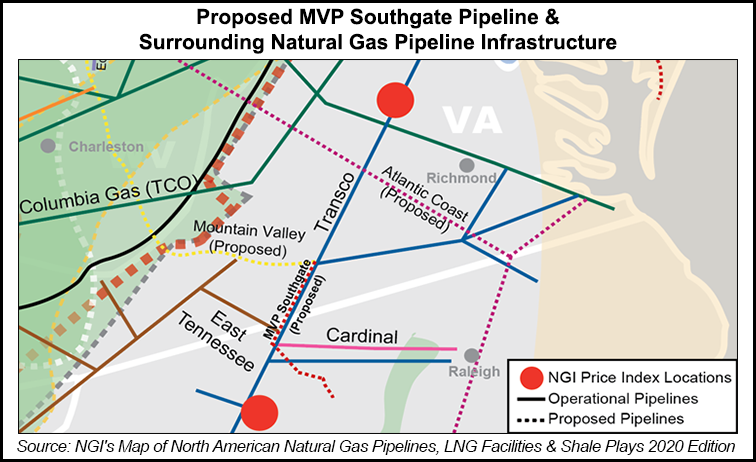 The Federal Energy Regulatory Commission in its regular meeting turned back the rehearing request for the Southgate expansion by a 2-1 vote. Chairman Neil Chatterjee and James P. Danly said the environmental impacts would be acceptable, while Richard Glick was in dissent (No. CP19-14-001).

Since receiving a FERC certificate in late 2017, MVP has run into numerous legal and regulatory snags, including a ruling by the U.S. Court of Appeals for the Fourth Circuit last year to stay crucial Endangered Species Act approvals. The North Carolina Department of Environmental Quality last month also rejected a water permit required for the extension.

FERC, he said, “continues to treat climate change differently than all other environmental impacts.” The Commission has refused to consider whether Southgate’s contribution to climate change from greenhouse (GHG) emissions “would be significant, even though it quantifies the project’s direct GHG emissions from construction and operation.

“That failure is an integral part of the Commission’s decision making,” said Glick. “The refusal to assess the significance of the project’s contribution to the harm caused by climate change is what allows the Commission to determine that the environmental impacts associated with the project are ‘acceptable’ and, as a result, conclude that the project is required by the public convenience and necessity.”

Claiming Southgate would have no significant environmental impacts but refusing to assess the impact “on the most important environmental issue of our time is not reasoned decision making,” Glick said. “The Commission’s failure to meaningfully consider climate change is once again forcing me to dissent from a certificate order that I might otherwise support…No matter what I might otherwise think of a project, I will not join an order that functionally excludes climate change from the Commission’s analysis.”

Glick also disagreed with FERC’s approval of MVP’s 14% return on equity (ROE) for Southgate. He argued that there is FERC precedent for a 14% ROE “for a new pipeline, but not an expansion of an existing one.”

FERC in June issued the Southgate certificate and authorized MVP to build and operate Southgate, a 75.1 mile-long system with associated aboveground facilities in Pittsylvania County, VA, and North Carolina’s Rockingham and Alamance counties.

Requests for rehearing were filed by several environmental groups known collectively as the Appalachian Mountain Advocates, as well as the North Carolina Utilities Commission and the Monacan Indian Nation and the Sappony Indian Tribe.