For winter 2015/2016, trading at key points in New England didn’t see the same price spikes as in years past, but the underlying infrastructure constraints that have hampered the region on peak days could still lead to volatility in natural gas prices moving forward. 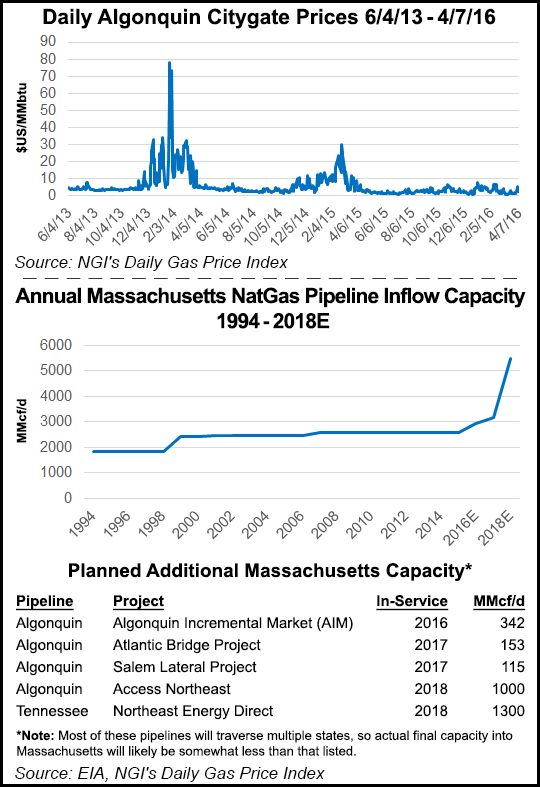 “Natural gas pipeline capacity into Massachusetts hasn’t increased much over the years, and has been stuck at 2.6 Bcf/d since 2007,” said Patrick Rau, NGI’s director of strategy and research. “That is enough to handle non-peak periods, but the problem is peak days. Demand during the coldest days of winter can far exceed that 2.6 Bcf/d.”

Erik Fabry, natural gas research analyst with Louisville, KY-based Genscape, said the price blowouts in New England the past two winters saw the “relatively price insensitive” residential/commercial demand eat up the limited supply, resulting in less gas-fired electric generation during peak periods as “less power is willing to compete” at high prices and thus transitions “over to fuel oil for the power stack.”

But the recent cold spell notwithstanding (see Daily GPI, April 7), the unusually mild temperatures during winter 2015/2016 saw the region avoid the extreme price spikes that have come during these peak cold periods.

According to Genscape, population-weighted average temperatures in New England from November-March were 4.85 degrees above normal during winter 2015/2016, compared with temperatures 3.02 and 3.78 below normal for 2013/2014 and 2014/2015 respectively.

EIA attributed the reduced volatility to “a combination of increased deliveries of liquefied natural gas (LNG) into the region, a fuel adequacy winter reliability program and the warmest winter on record.”

But while the temperatures never dipped low enough to spark price blowouts during winter 2015/2016, the underlying structural demand remains strong, meaning New England still has the same mix of peak day heating demand and infrastructure constraints that could produce volatility moving forward. Genscape data shows average residential/commercial demand in the region trending upward the past five years, climbing to around 2.2 Bcf/d from just over 2 Bcf/d during winter 2009/2010.

Pipeline developers, meanwhile, have taken note, with a slew of new projects going before FERC aiming to cure the region’s peak-day infrastructure bottleneck, including the Spectra Energy-backed Algonquin Incremental Market expansion, Atlantic Bridge, Salem Lateral and Access Northeast projects, and the Kinder Morgan Inc.-backed Northeast Energy Direct expansion of Tennessee Gas Pipeline Co. LLC. These projects, like many others proposed in recent years, have had to contend with opposition from environmental groups and even from state governments (see Daily GPI, March 29; March 1; Dec. 31, 2015; Nov. 18, 2015).

“There are five new pipeline projects that would more than double in-bound capacity into Massachusetts by 2018, assuming they are all built, and are all built on time,” Rau said. “That will help, but winter prices should still be pretty volatile. For example, the current Algonquin Citygate forward curve has a maximum basis price of $4.26 for winter 2016/17, but that falls to $3.96, $3.81, and $3.71 over the next three winters. Better, but still volatile.

“The wildcard is how much will that new pipeline capacity be used for new baseload, especially among power producers? The more of that gas that is already spoken for, the less peak day capacity will be available, which contributes to volatility.”