Rotating power outages continued to impact Texas end-users on Tuesday as the Electric Reliability Council of Texas (ERCOT) scrambled to restore service amid a blast of arctic cold that sent the electric grid and natural gas markets into chaos. 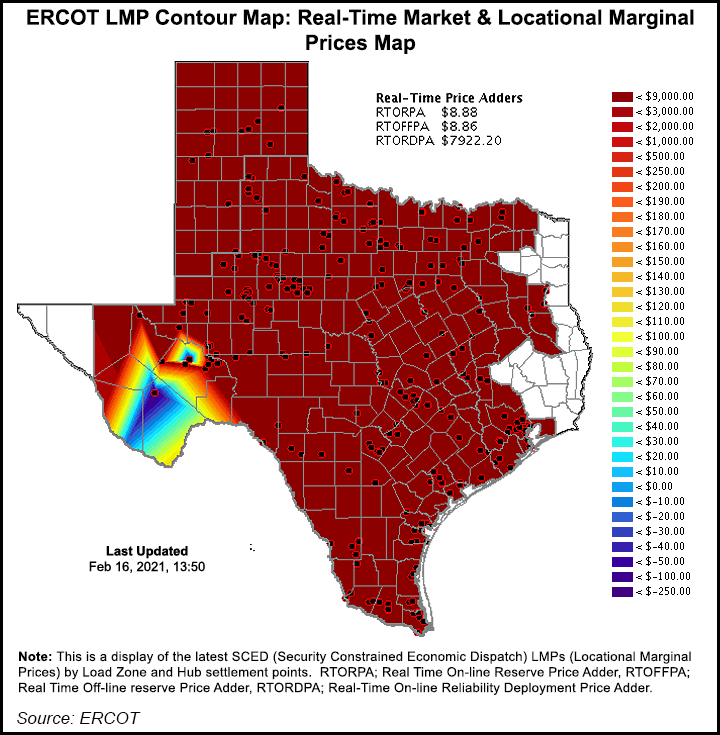 About 10,500 MW of customer load, equal to the demand of about 2 million homes, was shed at the highest point on Monday as the extreme weather caused “many generating units – across fuel types – to trip offline and become unavailable,” ERCOT said.

The independent system operator, which manages the flow of electricity to more than 26 million Texas customers, said that while it was “already contending with frozen wind turbines and limited gas supplies to generating units on Feb. 14, a significant number of additional generating units tripped offline when the weather worsened overnight.”

The outages extended south of the border as well, with Mexican grid operator CENACE enacting rolling blackouts across the northern states of Chihuahua, Coahuila, Nuevo León and Tamaulipas.

“The number of controlled outages we have to do remains high,” said ERCOT’s Dan Woodfin, senior director of system operations in a tweet posted at 8:23am CT on Tuesday. “We are optimistic that we will be able to reduce the number throughout the day.”

Around 11:30 am CT Tuesday, ERCOT said it had directed local utilities to restore power to 400,000 households, in addition to 500,000 households whose electricity had been restored as of Monday evening.

ERCOT said it expected to restore more customers by the afternoon as additional wind, solar and thermal output became available. However, “the amount we restore will depend on how much generation is actually able to come online.”

ERCOT urged Texans without power to turn off their thermostats and unplug appliances, warning that too much load on restored circuits at once could cause another outage.

Some observers of the chaos blamed an overreliance on intermittent wind  and solar power for the supply shortfall, while others highlighted that oil and gas production, pipelines and gas-fired power plants were similarly ill-equipped to handle the icy temperatures.

About 7 Bcf/d of natural gas production had been shut-in by the freeze-off since Thursday, with most of that amount concentrated in the Permian Basin, said analysts at EBW Analytics, noting that disruptions could continue through the week.

Critics also pointed to the structure of ERCOT’s energy-only market, where generators are paid for producing energy but not for keeping reserve capacity on standby to meet future demand peaks.

“This level of cold in Texas, this is unheard of,” Johnson said. “It’s never happened before.”

Part of the issue was natural gas shortages, she said, explaining that the gas pipeline network is configured to move gas out of Texas and into colder regions during the winter months.

What’s more, Texas does not have the same access to underground natural gas storage facilities as colder regions such as the northeast.

Additionally, Texas’ oil and gas fields, pipelines, and renewable and conventional power generating assets simply are not set up to handle below-freezing temperatures the way that similar installations are in colder states, Johnson said.

On top of that, she said, some thermal power facilities in Texas were undergoing scheduled winter maintenance, since ERCOT’s highest demand spikes are normally seen in the summer.

Johnson said there is “no silver bullet” for preventing a similar catastrophe in the future. She said the costs of measures such as winterizing infrastructure, adding natural gas storage, or implementing a capacity market would be passed on to ratepayers, almost certainly leading to more controversy.

In a note to clients on Tuesday, analysts at Clearview Energy Partners LLC said they are “skeptical that efforts to slow renewables would take root” in Texas, citing ERCOT’s report that generators across multiple fuel types were tripped offline by the cold.

What’s more, “Texas does not have typical state policies driving renewable buildout that [could] easily be reversed or modified.”

Texas is home to 29.2 GW of wind capacity, equal to 26% of total U.S. deployment, along with 4.2 GW of solar, or 10% of the national share, the Clearview team highlighted.

About 60% of homes in Texas use electricity as their primary source of heating, according to the Energy Information Administration.

The American Gas Association said Tuesday that the United States set a new two-day record for nationwide natural gas delivery on Feb. 14 and Feb. 15 as much of the nation was gripped by the cold front.

“While natural gas utilities faced some unprecedented challenges and spot prices climbed in some regions due to spikes in demand, families and businesses that use natural gas were protected from higher prices by the careful planning of their utilities,” AGA said.

The trade group said gas utilities “use multiple long-term contracts that seek to guarantee enough supply to meet demand and to lock in affordable prices,” noting that 38% of the natural gas delivered on Feb. 15 came from storage.

U.S. liquefied natural gas (LNG) export terminals were struggling to bounce back Tuesday after feed gas deliveries in recent days plummeted to their lowest point since the fall amid the historic cold snap. They were forced to contend with soaring domestic demand.

Deliveries to the terminals via interstate pipelines fell to 5.45 Bcf Monday, down from 9.16 Bcf on Friday, according to NGI data. The declines have been driven largely by facilities along the Gulf Coast. Nominations had bounced back by 2 Bcf day/day on Tuesday and were at 7.70 Bcf, but deliveries could easily slip again throughout intraday cycles as the weather persists.

A return to normalcy is tenuous for now as record cold was again expected in Texas on Tuesday. The forecast in the South and along the East Coast is expected to remain cold in the coming days, which is likely to fuel more volatility in the U.S. gas market.

The weather has sent pipelines into emergency mode, with many declaring force majeures, operational flow orders and other restrictions. “Other declarations were made by multiple systems putting in place ‘human needs’ requirements,” Wood Mackenzie analysts said.

Along the Gulf Coast, operations have been disrupted at ship channels serving the Cameron, Corpus Christi, Freeport and Sabine Pass LNG terminals. While weather conditions offshore were favorable Tuesday, waterways were slowly opening again as icy roads, overpasses and bridges made it difficult for some personnel to return to work, Moran Shipping said.

Bloomberg ship-tracking data showed about eight vessels clustered off the Gulf Coast early Tuesday. One vessel left Sabine Pass in Louisiana on Tuesday, but no other ship has left the Gulf Coast terminals since Sunday.

Freeport LNG on Quintana Island in Texas will shut down LNG production at trains 2 and 3 to cut natural gas and electricity consumption, the company said in a regulatory filing. Freeport also said it was forced to shut train 1 amid freezing temperatures Monday. The move came after Texas Gov. Greg Abbott’s office for the first time ever reportedly asked the terminal to scale back operations as the state works through the energy crisis, according to Bloomberg.

Cameron LNG in Hackberry, LA, said it lost power from its electricity utility on Monday due to an issue with the transmission grid. Cameron buys power from Entergy Corp., rather than producing its own electricity from natural gas like most other domestic terminals.

“This was a separate issue than the rolling outages currently being experienced by customers in Texas,” the company said. “We will begin the process of restoring operations at the site as soon as reliable power is restored and are in close coordination with Entergy.”

Jamison Cocklin contributed to this story.