Two of North America’s largest natural gas producers on Wednesday pleaded not guilty to charges that they conspired in a 2010 Michigan lease sale. 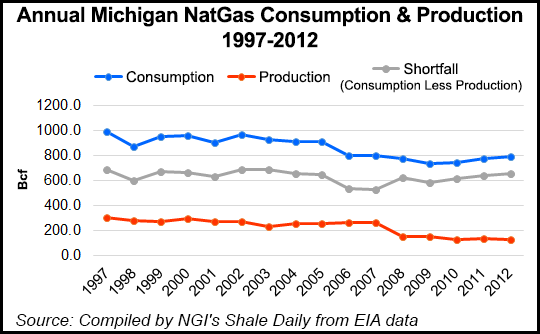 Chesapeake is the second largest natural gas producer in the United States and Encana is one of the largest in North America. Earlier this month Michigan Attorney General Bill Schuette filed criminal charges against the companies for allegedly violating state antitrust laws in an oil and gas auction three years ago (see Shale Daily, March 6).

The explorers each are charged with one count of antitrust violations relating to a contract or conspiracy in restraint of commerce, a misdemeanor punishable by up to two years and/or $10,000 fine for an individual or up to $1,000,000 for a corporation. They each also face one count of attempted antitrust violations, a misdemeanor punishable by up to one year and/or $1,000 fine.

Encana spokesman Doug Hock told NGI‘s Shale Daily on Wednesday that when “all of the evidence is viewed by the courts, we believe the conclusion will be clear that Encana did not breach any antitrust laws. The public has only seen limited and select material related to this case as reported in the media.

“In contrast, the independent investigation undertaken by external counsel on behalf of Encana’s board of directors in 2012 comprehensively reviewed all available information in coming to its determination that the company did not engage in collusion with competitors with respect to land leasing activities in Michigan in 2010,” Hock said (see Shale Daily, Sept. 7, 2012). An internal investigation by Chesapeake’s board also uncovered no wrongdoing (see Shale Daily, Feb. 21, 2013).

“In addition, written evidence received from third parties since the completion of the board investigation clearly shows that Encana and Chesapeake remained fiercely competitive the entire time the two companies were active in purchasing leases in the State of Michigan,” Hock said.

Encana, he said, has invested close to $230 million into the state over the last five years “as part of our ongoing development and we have a great respect for the environment and the communities in which we operate across the state. We are looking forward to presenting all of the evidence as we move through the court proceedings. Encana takes compliance with all laws very seriously and we are committed to ethical business conduct in all that we do.”

Encana was one of the first to publicly advance its unconventional development in Michigan, trailblazing into the prospective Collingwood Shale, which extends into part of the Utica formation. Chesapeake no longer actively operates in Michigan but it has spent more than $400 million also to explore the Collingwood. A spokesman said the case against the company has no merit.

A hearing is scheduled for May 5 to challenge whether prosecutors have probable cause to bring the charges.