New Jersey Natural Gas Co. (NJNG) has asked the New Jersey Board of Public Utilities (BPU) to approve its plans to build the Southern Reliability Link — a 28-mile, 30-inch diameter natural gas pipeline that the company says is necessary to reinforce its system and provide service in the event of another incident like Superstorm Sandy. 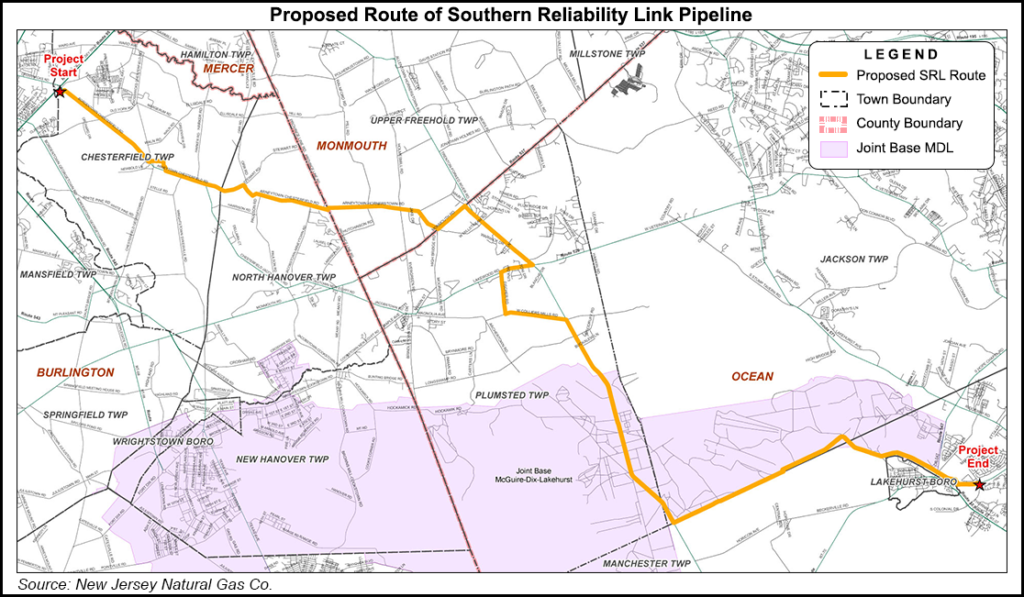 In its application filed with BPU on April 2, NJNG said more than 85% its winter season peak day natural gas supply is currently provided by the Texas Eastern Transmission (Tetco) system, while the remaining 15% is supplied by the Transco system. The connections are, respectively, northwest and north of NJNG’s service area.

“Therefore, NJNG’s customers at the southern end of the system, particularly those in Ocean, Burlington and Monmouth counties are the most vulnerable and are likely to be adversely affected by a supply interruption or system failure,” NJNG said.

According to NJNG, the Southern Reliability Link pipeline would start at an interconnection with the Transco system in Burlington County’s Chesterfield Township. It would then traverse Burlington’s North Hanover Township, Upper Freehold Township in Monmouth County, and Ocean County’s Plumsted and Jackson townships before terminating in Ocean’s Manchester Township.

The Southern Reliability Link “will reinforce NJNG’s existing transmission infrastructure by providing an alternate means to maintain system pressure in the event of a supply interruption or system failure in the interstate pipeline, the gate station or NJNG’s transmission backbone system,” NJNG said. “Hurricane Katrina and Superstorm Sandy showed the difficulty in returning service to customers after service interruptions.

“While the damage caused by Katrina and Sandy impacted smaller sub-systems, when applying that condition to NJNG’s transmission system supplying Monmouth, Ocean and Burlington counties, the vulnerability to the full system is apparent.”

NJNG, the principal subsidiary of New Jersey Resources, was the hardest hit of all natural gas utilities on the East Coast from Superstorm Sandy (see Daily GPI, Sept. 4, 2013). It estimates the project will cost between $130 million and $160 million. The company asked BPU for an expedited review of the project, and hopes to begin construction this fall, with an in-service date of early 2016.

NJDEP Larry Hajna told NGI that Transco was issued freshwater wetlands and flood hazard area permits for its Leidy Southeast expansion, plus a letter of interpretation, which he said would outline the location of regulated areas and wetlands for the company. He said they were the last permits Transco was waiting for from NJDEP.

“The final permits reflect revisions the company made to reduce environmental impact, through reductions in the size of the right-of-way,” Hajna said Thursday. The permits will allow Transco to build the:

Transco spokesman Chris Stockton said the company had already started tree clearing operations in non-regulated areas in March. The permits would allow it to complete the work in regulated areas. He said pipeline construction would begin in May, and the project is expected to be in service by the end of December.

“We appreciate the actions of NJDEP, and what that represents is the culmination of a very extensive environmental review,” Stockton told NGI on Thursday. “The permit is going to allow us to proceed and keep the project on schedule. It’s important infrastructure that’s going to be needed so we can meet our customer needs and have it in service by next winter.”

FERC gave Transco permission to begin partial path service on the proposed expansion in late February (see Daily GPI, March 3). That followed approval by the Federal Energy Regulatory Commission last December to issue a certificate of public convenience and necessity for the project, which would create an additional 525,000 Dth/d of capacity from Transco’s Leidy line in Pennsylvania as far south as Choctaw County, AL (see Daily GPI, Dec. 18, 2014).