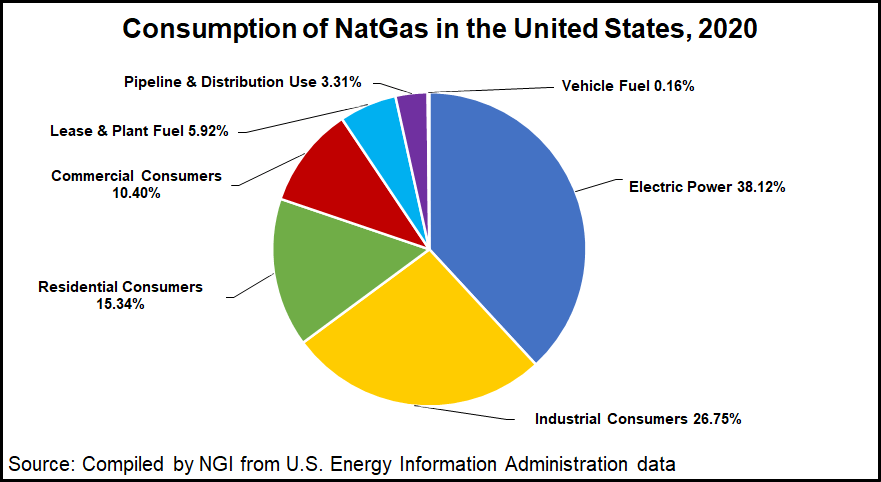 “Regulatory action, investors and Wall Street, and activism and interest from both consumers and employees, are driving the adoption of low-carbon fuels, including natural gas,” NGVAmerica’s President Daniel Gage told NGI.

Gage said he foresees continued refuse-hauling fleet conversions to NGVs this year, along with growing interest in adoption across the short-haul, middle-mile, and parcel delivery markets.

Despite dramatic increases in natural gas prices in 2021, the appeal of heavy-duty NGVs remained strong across markets, said Gage.

Higher natural gas prices have had “minimal impact” on NGV demand for three reasons, he noted.

“First, most larger fleets enter into a long-term contracted gas rate with their fueling provider so they avoid such seasonal ups and downs,” Gage said. “Second, even with these fluctuations, the natural gas retail rate at the pump remains below diesel.”

Gladstein, Neandross & Associates CEO Erik Neandross, who runs the transportation and energy consulting firm, told NGI that transit has been “really one of the lead sectors” in advancing heavy-duty NGVs across North America.

“Beyond that, the refuse sector is really one of the dominant” sectors using NGVs fueled by compressed natural gas, aka CNG, he said. “A talking point in industry is that 60% of all CNG refuse truck orders are for CNG.”

Not only are NGVs becoming more commonplace across heavy-duty fleets, but more are using  renewable natural gas (RNG), said Gage.

“Both sectors are increasingly using RNG,” he said, referring to the on-road and off-road heavy-duty transport users.

One major fleet operator that has demonstrated a bullish RNG stance is Amazon.

A transportation analyst with Argonne National Laboratory has said that RNG, harvested from sources such as dairies, landfills and wastewater treatment plants – could decarbonize much of the energy that heavy-duty vehicles use.

To be sure, relatively high prices and short-term contracts have impeded greater RNG adoption, an Innova Energy Services executive has observed.

When asked whether vehicle electrification is becoming a greater threat to NGVs in heavy-duty transport, Gage said it “may become a more realistic option for last-mile delivery fleets in 2022.”

However, he cautioned against overlooking the issue of technological maturity between electric vehicles and the NGV counterparts they would ostensibly replace.

Electrification “still has a very long way to go to prove its resiliency, reliability, and range for most Classes 6-8 fleet applications” including box trucks, vocational vehicles, and tractor trailers, Gage said.

Furthermore, time is of the essence for publicly traded companies as they decarbonize their operations, he said.

The companies’ “sustainability goals require immediate investment in ultra-low carbon options, They cannot wait for perfect. Plus, RNG-fueled trucks and buses are achieving a carbon-negative outcome now, without the enormously costly investment in vehicles and charging infrastructure that plug-in electric vehicles require. RNG trucks and refueling are proven, commercially available, and a fraction of the cost today.”

Neandross said he foresees “continued progress toward lowering the carbon intensity value of RNG in 2022” as well as “great volumes of supply coming online” across the United States.

On the vehicle electrification issue, Neadross said economics is a key barrier – for now.

“In the trucking business, it will without question always come down to total cost of operation,” or TCO, he said. “It’s interesting to do electric, but if it costs more that’ll be really hard to justify because someone has to pay for it.”

He added, however, that truck manufacturers such as Peterbilt Motors Co. and Mack Trucks are making strides in offering electric variants of commercial trucks for applications such as local and regional deliveries and refuse collection.

“There’s billions being invested in the future of transportation,” more than toward the transition to NGVs,” he said. “Truck manufacturers are spending tens of billions and they’ll want their money back.”

According to Tesla’s website, the Semi would be available with a 300- or 500-mile range for a base price of $150,000 or $180,000, respectively. Although Tesla has received orders for the Semi from companies such as Walmart, United Parcel Service (UPS), and FedEx Corp., the electric truck’s production has been plagued by delays.

Questions linger about factors such as the Semi’s weight and how Tesla plans to penetrate the long-haul trucking market, said Neandross.

“The big picture: there’s no question we’re moving more and more into the electrification of transportation,” Neandross said. “Fundamentally, my hypothesis is that we’ll probably get there sometime in the next two to three decades.”

In the nearer term, he predicts ongoing “strong investments” in NGV technology by major fleet owners such as Amazon, UPS and Waste Management.

“Where fleets like these have figured out how to make natural gas work for them, they really then transition to an ‘all-in’ approach,” Neandross said. “The fuel cost savings and environmental sustainability benefits are really a great win-win for them.”