Technology advances for natural gas vehicles (NGV) and traditional gasoline-powered engines are likely to push NGVs to become 10-15% of some transportation segments, such as heavy duty (HD) vehicles, by 2020, according to the chief technology officer (CTO) of Vancouver, BC-based Westport Innovations. 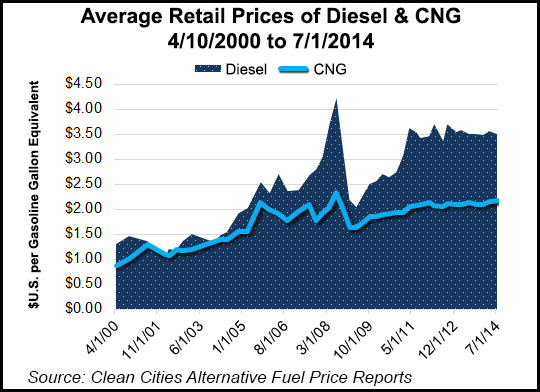 “I think we will see advances on all fronts as the market develops,” Westport CTO Patric Ouellette told NGI last Friday. “In North America the cost differential between diesel and gas is driving adoption in larger commercial vehicles (HD), and we are seeing advances in that segment.”

The pressure industry-wide is mounting, however, to come up with major advances that can slash costs of NGV equipment, according to analysts watching the industry. They point to falling diesel and gasoline prices, along with the continued higher costs for NGVs, compared to similar gasoline/diesel-powered models.

Technology developments can be expected for both compressed natural gas (CNG) and liquefied natural gas (LNG) used in NGVs, Ouellette said. And he added that there will be advances in the traditional internal combustion engine, and that should help NGVs too.

Separately, Westport in September unveiled an enhanced spark-ignited (ESI) NGV system targeted for medium-duty trucks and later updated developments on its high-pressure direct-injection second generation (HPDI 2.0) technology. It indicated that it needed to refine it and better align the product with developments among its prime original equipment manufacturer (OEM) customers.

Even with the technology breakthroughs, Westport also reported that it has had to lower its revenue estimates for 2014 to $130-140 million from a previous $175-185 million range, and expects its three operating business units combined to show a loss for the year. The causes are a combination of setbacks in both its overseas and North American markets, as well as delays in implementing new products for some of its OEM customers.

A realistic outlook for NGVs across the board in all of the market segments, including passenger vehicles, is not easy to piece together, Ouellette told NGI. That’s why companies such as Westport focus on key segments, such as the heavy-duty truck sector. A number of major suppliers in the NGV space are struggling to make a profit right now, analysts have noted, signaling the recent decline in diesel and gasoline prices.

“The path to medium- and heavy-duty fleets is clearer at the moment,” Ouellette said. “For NGVs to penetrate significantly in mass consumer markets in North America, there is a realistic chance of growth, but that growth would have to be underpinned by a combination of factors that are less certain, such as innovation on storage, a domestic energy policy that drives certain incentives for NGVs, or dramatic change in gasoline prices.”

Ouellette said he expects to see continued improvements for both NGV engine and storage technology as the market grows. “Because storage represents such a significant portion of the cost of a natural gas fuel system, innovation on that front would be very welcome, and there are several companies active on this front, for example, under ARPA-E [U.S. Department of Energy Advanced Research Projects Agency — Energy] funding,” he said.

“There are interesting possibilities on the fueling station side,” Ouellette said. “ARPA-E is funding innovative projects to reduce significantly the cost of home refueling units that could slowly refill a vehicle parked in one’s garage at night.”

Engines in the heavy-duty truck NGV sector are “quite unique,” he noted. They are neither quite like passenger car gasoline-powered engines nor the diesels they replace. Larger CNG tanks have been developed in the HD market with side-mounted and back-of-the-cab design, and similar developments have unfolded in LNG tanks where Westport has its “iCE PACK” system that includes pressure-building systems to provide colder, denser LNG.

Both fuel-injection and ignition technologies also are areas that Ouellette sees future advances coming to natural gas use in transportation. For on-road applications, he thinks the fuel injection advances are needed the most, given what he called the “evolution in powertrain technologies and the penetration [of NGVs] in commercial markets.” Ultimately, refinements in the fuel — both CNG and LNG for transportation — will be made, too, he said, adding that it isn’t yet a major issue.

Westport has looked at a number of market studies on the potential of NGVs penetrating more deeply the HD space, and has concluded that it is “certainly possible” that 10-15% of new trucks sold in 2020 will be fueled by CNG or LNG.

“There is a healthy market already in China where our joint venture with Weichai [Weichai Westport] sold approximately 40,000 engines last year for LNG trucks,” Ouellette said. “Europe has already started to explore the role of LNG in commercial transportation, but lags behind the United States in terms of growth. Through our Italian subsidiaries, we sell CNG components to OEMs and aftermarket globally for passenger cars.”