Some of the latest developments in the natural gas vehicle (NGV) industry are blurring international borders and energy sectors, giving further proof to the notion that gas use in transportation is becoming global in scope. 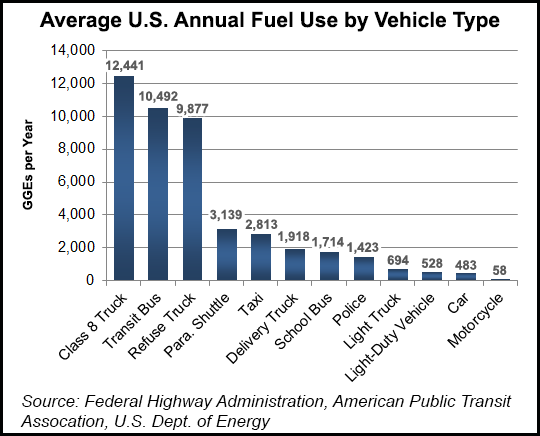 An example comes with Italy’s Landi Renzo creating a North American unit, Safe North America, for marketing its compressed natural gas (CNG) compressors on this side of the Pond. Safe, in turn, has inked a deal with Cicero, IL-based Broadwind Energy, a wind power supplier, to package and distribute the Italian-made CNG equipment.

Compressors will be provided on skids and packaged byBroadwind, which will also be the primary provider of service and technical support in parts of Canada and the United States, according to Safe President Mario Pirraglia, who said the company will provide “world class equipment and service” in North America.

Safe hooked up with Broadwind for its fabrication expertise and national service network, according to Pirraglia. Broadwind CEO Peter Duprey predicted that with Landi Renzo’s 60 years of experience with CNG, they can help accelerate technology advancements in North America.

A technology advancement is being funded by the California Energy Commission (CEC) to advance CNG-fueled hybrid electric vehicles (HEV) under a $900,000 grant. Greenkraft CNG trucks is collaborating with Efficient Drivetrains Inc. (EDI) to introduce a Class 4 vehicle combining the benefits of the gas and electric transportation technologies.

Greenkraft will supply a CNG-fueled truck to EDI for installation of a plug-in HEV powertrain.

Having bought some of these first pickups, NewTex CEO Bill Collora called it “a no brainer,” adding that “the savings are incredible.” NewTex’s weekly fuel bill has been cut from $8,000 to $5,000, Collora said.

In another deal, Nat G CNG said it has begun delivering the first of 31 CNG trucks to San Antonio-based Matera Paper, which is using box trucks built by International Navistar that have been repowered with natural gas engines under the Texas Emissions Reduction Program (TERP) that is run by the Texas Commission on Environmental Quality.

To the north in Canada the CNG move into heavy duty transportation is expanding as Ryder Systems Inc. and Canadian American Transportation in Quebec have signed a full-service lease agreement for 100 CNG sleeper tractors, marking Ryder’s first CNG deal in Canada and its largest to date for NGVs, which it has been touting internationally (see Daily GPI, May 21, 2012).

Ryder will provide maintenance for the 100 vehicles in Montreal where it is upgrading its service facility to handle CNG vehicles. The trucks are Freightliner Cascadia 113 CNG units with a 72-inch sleeper and a Quantum 169 fuel tank package. The vehicles will be delivered in mid-2015.

Elsewhere in Canada, a major construction company, Ledcor, said it is acquiring 200 CNG Ford Transit Connects, creating what the company dubbed “one of the largest fleets of CNG vehicles in Canada.”

The 2014-2015 cargo vans have been converted by G.W. Anglin Manufacturing with CNG fuel systems made by Altech-Eco, according to Ledcor, which said this makes them the “first vehicles of their kind.” The company estimates it will cut annual fuel costs by about 30% and reduce its greenhouse gas emissions by 23%.

The Canadian Natural Gas Vehicle Alliance head Alicia Milner praised Ledcor for “setting the bar high and showing the way” for other Canadian fleet operators. The CNG vehicles will be deployed throughout western Canada in British Columbia, Alberta and Saskatchewan.