Low oil prices and advances in the electric vehicle (EV) sector will slow the pace of growth in the natural gas vehicle (NGV) market, according to an update to a Navigant Research report published last year. 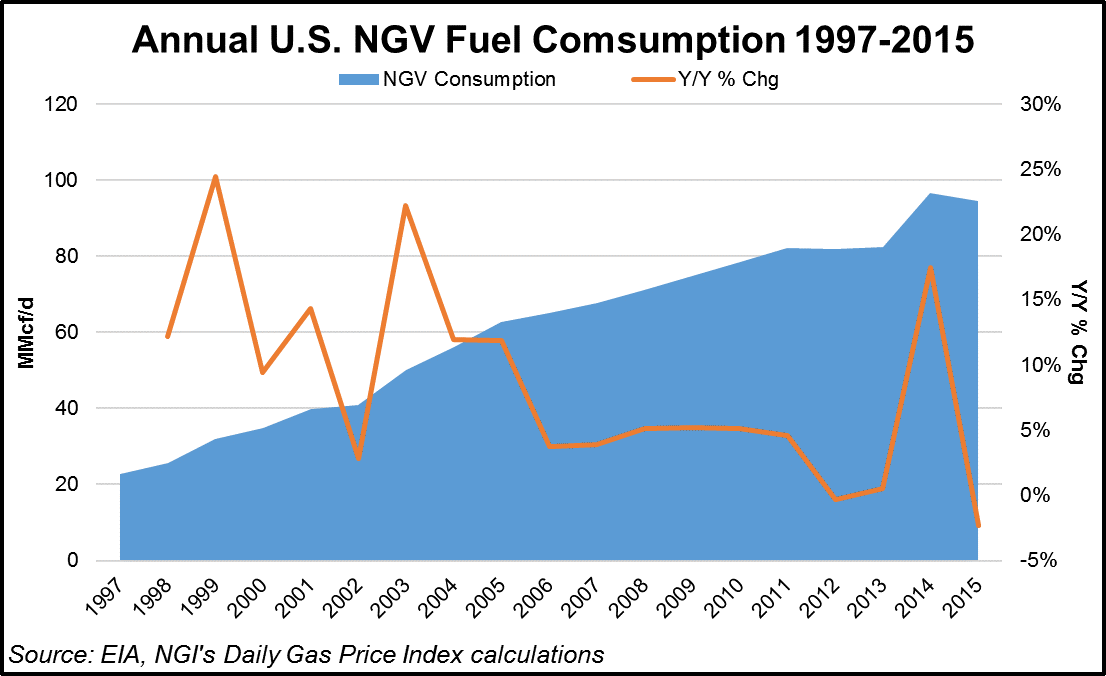 The somewhat dour outlook for the NGV sector relative to EVs has not changed this year, Navigant senior researcher Sam Abuelsamid told NGI on Thursday. Nothing short of a price spike in liquid fuels is likely to change that outlook in North America and Europe, Abuelsamid said.

Since the report was published at the end of 2015, the push for EVs has picked up globally, driven by air quality concerns, Abuelsamid said. “There really is a global push for electrification at the same time we see the cost of batteries come down faster than had been projected with the vehicle manufacturers all making pushes for more affordable, longer-range EVs.”

Separately, Matt Godlewski, president of Washington, DC-based NGVAmerica, basically agreed that NGVs are facing a stiff challenge these days in commenting on a recent Alpha Investor analysis that downplayed the outlook for Westport Fuel Systems, an NGV fueling equipment supplier.

“The NGV market has followed the cycle for the oil market since its inception,” Godlewskitold NGI late last month. “There is no question that the commodity price drop has a lot of fleet operators that were considering making the switch [to natural gas] still on the sidelines. Some of the incremental growth we are still seeing is due to trash trucks or big fleet operators such as UPS.”

Godlewski acknowledged that the NGV market is “hurting, and it isn’t what it was two years ago, but there is still growth going on.” Noting that the price of oil is out of everyone’s control, he said it is too early to predict whether next year will see a turnaround.

While projecting up to 40 million light-duty NGVs on the road globally by 2025, growth in NGVs generally was expected to be at a “slower pace than what was projected prior to the drop in oil prices,” Navigant’s Abuelsamid concluded late last year, and he told NGI Thursday “we haven’t seen any evidence to the contrary in the last eight or nine months.”

Abuelsamid said that while oil prices remain relatively low, “the move toward electrification globally is probably accelerating, especially in Europe. Volkswagen and other OEM vehicle manufacturers are pressing ahead much more aggressively with affordable, longer-range EVs,” he said.

“There are a number of nations around the world where regulators would like to eliminate internal combustion engines entirely in the next couple of decades. While that may or may not happen, it certainly doesn’t bode well for NGVs with the possible exception of China.”

As a microcosm of the global picture, California is also pushing hard for its own form of electrification as part of the state’s aggressive climate change agenda, Abuelsamid said. He thinks in the heavy duty sector, NGVs will continue to grow, but among light duty vehicles, natural gas is “unlikely to gain any traction in the U.S. market.”

In North America, short of a significant increase in the price of liquid fuel, there is nothing on the horizon that is likely to turn around the NGV market in the light duty sector, Abuelsamid said. “The cost of doing NGV conversions is high enough so the cost differential for light duty vehicles doesn’t make it worthwhile economically,” he said.

In the Alpha Investor analysis, Westport was picked apart somewhat for over-emphasizing recent results from its acquisition of Fuel Systems and overlooking the company’s overall results that saw a 15% drop in revenues and margins shrinking from 33.4% to 21.2% in 2Q2016. “The key factor why Westport’s business struggled was because of a massive decline in Cummins Westport joint venture, which saw a 30% drop in units sold,” the Alphas analyst wrote.