Fleets of all sizes are expanding their use of natural gas as a transportation fuel, led by United Parcel Service (UPS). The company plans to add 1,400 compressed natural gas (CNG) trucks and 12 fueling stations to its operations. 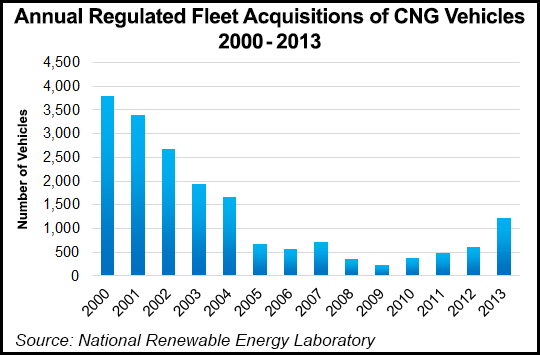 UPS is planning a nearly 30% boost in its already precedent-setting fleet of more than 5,000 alternative fuel and advanced technology vehicles. It will add up to 800 mostly Kenworth tractor trucks and 600 Freightliner (Morgan Olson custom chassis) package cars during the next year, all operating on CNG.

To support the expansion, UPS said it will add a dozen CNG fueling stations and upgrade three existing stations. TruStar Energy has been tapped to build the stations. Agility Fuel Systems and Quantum Technologies will be the major suppliers of CNG cylinder assemblies for the vehicles.

On a smaller but more glitzy scale, Las Vegas, NV-based hotel/casino operator MGM Resorts plans to roll out the nation’s first fleet of CNG-fueled Cadillac XTS stretch limousines. The 22-foot luxury vehicles are the third generation of CNG-fueled limos and other vehicles in MGM’s fleet.

World CNG, which helped MGM introduce the first commercial CNG Cadillac Escalades in 2013, will provide the fuel and fueling for the latest limos at MGM’s Aria, Bellagio, MGM Grand, and Mandalay Bay hotel/casinos. MGM has run a fleet of CNG Lincoln Town Cars since 2009.

In California on Wednesday, the California Energy Commission (CEC) approved plans for its 2015-2016 investment plan for its Alternative and Renewable Fuel and Vehicle Technology Program, which has disbursed several hundred million dollars over recent years. In its integrated energy policy report, the CEC earlier this year called for accelerating efforts to transform the state’s transportation system to zero- and near-zero-emission technologies (see Daily GPI, March 2).

In other action, the CEC approved $3.4 million in grants for research and development projects aimed at increasing the operating efficiency and value of advanced ignition systems and fueling infrastructures for natural gas vehicles (NGV).

Meanwhile, in Colorado the state Energy Office has named its grant recipients for the second round in the alternative fuels infrastructure development program, naming Oklahoma City-based Sparq Natural Gas to build two CNG stations and Texas-based CNG 4 America to build a third station.

When the second-round stations are completed, a CNG operator will be able to travel the entire north-south distance of Colorado with access to CNG fueling, a state Energy Office spokesperson said. A third round of funding will get under way this summer as part of the four-year, $30 million alternative fuels program.

In the oil/gas sector Krug Energy, a hauler of water for oilfield operations, said its fleet of 20 new Kenworth CNG tractors is using about 2,000 gallons of CNG daily, operating out of a public-access fueling facility in Arkansas that was built last year by TruStar Energy.