Cheap natural gas is pushing New York and Massachusetts nuclear power generators to the sidelines and prompting plant closures. But helping them out with a subsidy — as New York is considering — would be an unfair intervention that would distort markets, natural gas interests said Monday. 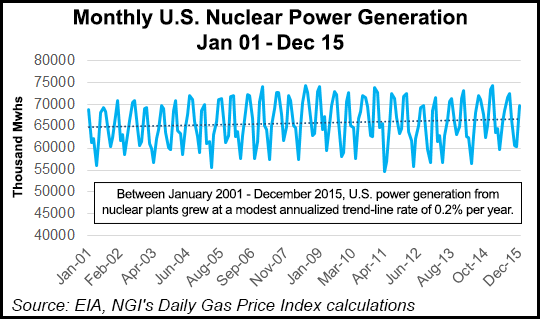 In a January whitepaper, New York Public Service Commission (NYPSC) staff argued that allowing the closure of zero-emission nuclear plants in the region would increase reliance on gas-fired power and would raise greenhouse gas (GHG) emissions. The Natural Gas Supply Association (NGSA), in comments filed Monday on the paper, urged the NYPSC to allow market forces to establish a path forward for the state’s carbon reduction.

Coal-fired power is usually the victim of low natural gas prices, but nuclear plants have suffered, too, the NYPSC whitepaper said.

“Natural gas prices have decreased from the $6-9/Dth range experienced from 2003-2008 to below $4/Dth for the past few years,” the whitepaper said. “The low natural gas prices and the concomitant low electric wholesale energy market prices have led to lower revenues for all generators. This is an especially significant problem for upstate nuclear plants, which rely heavily on energy revenue margins to maintain their financing viability.”

The Robert Emmett Ginna nuclear plant in Ontario, NY, recently announced plans to close, the paper noted, despite being licensed to operate through September 2029. Without an additional source of revenue, the plant would run at a loss with today’s gas prices, NYPSC staff said. In the case of the Ginna plant, Rochester Gas & Electric Corp. agreed to a reliability support service agreement that allows for payments to plant owner Exelon Corp. through April of 2017, the whitepaper said.

Last November, Entergy Corp. said it would close the James A FitzPatrick nuclear plant in Scriba, NY by early next year. Poor economics were cited for the decision although the plant is licensed to run until October 2034, NYPSC staff said.

Nine Mile Point nuclear station Units 1 and 2 also face the same economic pressures as the Ginna and FitzPatrick plants, NYPSC staff said. “In total, these upstate plants provide approximately 16% of the state’s energy. Their closure would have dramatic impacts on New York, in particular on the state’s effort to lower GHG emissions,” staff said.

If the plants were to close, the state would have to rely more on natural gas-fired power, which would cause “significant increases in carbon dioxide, nitrogen oxide, and other air pollutants.”

Back in January when the whitepaper was released trade group Nuclear Matters said it supports the state’s plan for a clean energy standard (CES) that includes nuclear.

“New York is a leader in working towards a clean energy future and we applaud the state’s recognition to include some of its existing nuclear energy plants in its carbon-cutting plan,” the group said in a January statement. “In counting the power generated by New York’s upstate nuclear energy plants in its CES, New York is properly valuing these assets for their significant role in producing carbon-free energy. We are also pleased with the state’s decision to prevent the premature retirement of clean, safe and reliable nuclear plants through the creation of new market incentives.