NFR Energy LLC has closed two private deals worth a combined $736 million to acquire assets in the Anadarko Basin and Eagle Ford Shale. The company also announced that First Reserve Corp. has increased its interest in the parent company, NFR Holdings LLC, to 99.7% and NFR is to be renamed Sabine Oil & Gas LLC. 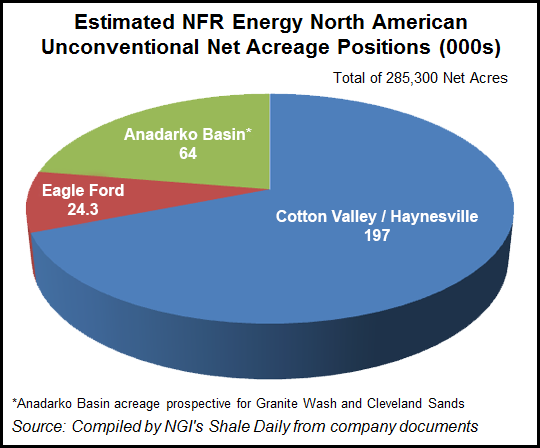 The two acquisitions give the company three core operating areas: East Texas, the Eagle Ford of South Texas and the Anadarko Basin.

NFR acquired all the assets of Oklahoma City-based TLP Energy LLC and its subsidiaries, (Anadarko Basin assets), for $655 million and certain Eagle Ford Shale assets from two independent oil and gas companies for $81 million (Eagle Ford Shale assets). The Anadarko Basin deal, for acreage mainly in the Texas Panhandle, has an effective date of Oct. 1, and the Eagle Ford transaction has an effective date of Sept. 1.

“These acquisitions immediately result in a large, well balanced company with three major producing and development basins and exposure to oil, gas and NGLs [natural gas liquids],” said NFR CEO David Sambrooks. “We will focus on high-return development drilling directed at our new assets and expect to rapidly delever the balance sheet and further increase the company’s liquids production.”

Sambrooks said the company has a “substantial” drilling inventory “of some of what we believe are the highest-return projects in the U.S. onshore, reflected in our new estimated pro forma proved reserve base of 280 million boe.”

The Anadarko Basin assets are composed of 64,000 net acres (about 95% operated) prospective for the Granite Wash and Cleveland Sand formations, primarily in Ochiltree, Lipscomb, Roberts and Hemphill counties, TX. Current net production is 6,500 boe/d, and estimated total proved reserves are more than 40 million boe, about 55% oil and NGLs. The Anadarko Basin assets have about 425 drilling locations and are expected to offer “low-risk development opportunities and excellent project economics,” NFR said.

Prior to the TLP and Eagle Ford Shale acquisitions, NFR, which was formed in 2007, had made seven strategic acquisitions or joint ventures valued at $500 million since 2009, the company said. “As a result of these acquisitions and subsequent development activity, NFR was able to increase its production from 66 MMcfe/d in Q4 2009 to about 124 MMcfe/d in Q3 2012,” NFR said in a deal presentation slide.

During a conference call to discuss the deal, Sambrooks said the company was not ready to talk about its 2013 capital expenditure plans. However, the Haynesville Shale won’t be getting much attention as NFR aims to increase liquids output to about 35% of production by the end of next year. “You don’t get that by drilling Haynesville,” Sambrooks said.

“NFR has been a strategic investment for our firm since 2007, and we believe the assets acquired are an important and exciting part of the company’s growth strategy moving forward,” said First Reserve Managing Director Michael France. “The track record of NFR’s management team speaks for itself and we are confident they will do a great job of developing these transformational assets.”

Standard & Poor’s Ratings Service (S&P) revised its outlook on NFR to “stable” from “negative” and affirmed its “B” corporate credit rating and assigned a “B” issue rating and “4” recovery rating to the proposed senior second lien term loan. S&P also lowered its issue rating on NFR’s existing senior unsecured notes to “CCC+” from “B-” and revised the recovery rating to “6” from “5.”

“The stable outlook reflects our expectation of improving cash flows and liquidity in 2013, and we estimate that NFR will likely maintain leverage slightly below 4x by the end of 2013,” said S&P credit analyst Ben Tsocanos.