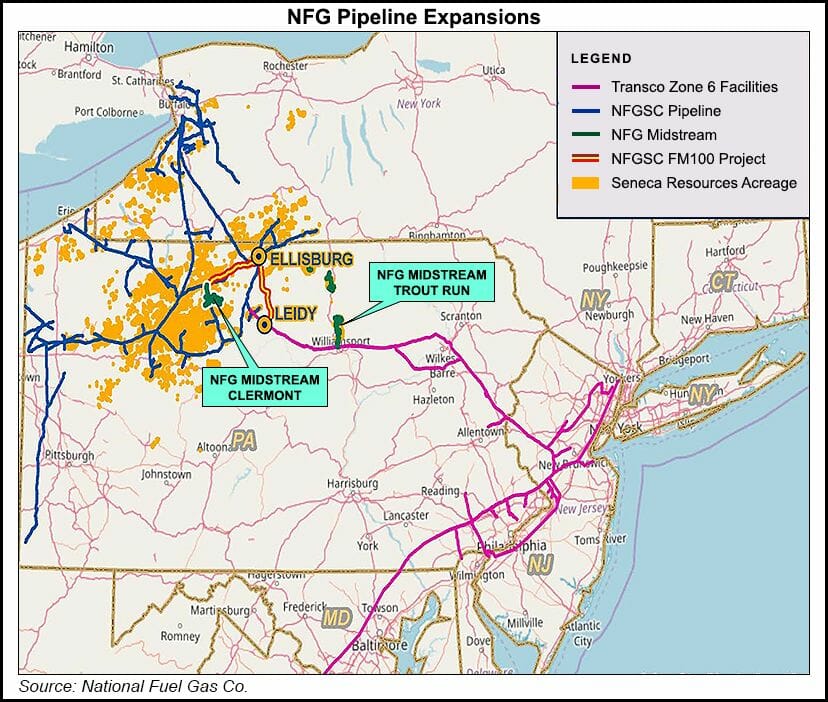 While details of the new 300 MMcf/d project are still being worked out, the Transco expansion would provide a path for NFG upstream subsidiary Seneca Resources Corp. to send volumes from its Western Development Area (WDA) in northwest Pennsylvania to Transco Zone 6 markets in the New York City region. NFG CEO Ronald Tanski said Transco is currently in discussions with other potential shippers to see if the project can be upsized. Both parties are currently targeting a late 2021 in-service date.

The timeline wouldn’t be too different from what NFG currently sees as a 2020 in-service date for its beleaguered Northern Access project, which would move 490 MMcf/d from the WDA to New York, Canada and the Midwest. New York regulators, as they have for several other natural gas transmission projects, denied a water quality certificate for Northern Access more than a year ago. NFG is awaiting the outcome of an appeal in federal court and for the Federal Energy Regulatory Commission to decide on a rehearing request.

“When our Northern Access interstate pipeline project ran into a roadblock last year, we began talking about the possibility of an additional project we might build to transport Seneca’s natural gas production from our Western Development Area to a more liquid market area with stronger natural gas prices,” Tanski said. The Transco expansion would “do just that.”

Seneca produced 46.1 Bcfe in fiscal 2Q2018, up 1% from the year-ago period and up 15% from fiscal 1Q2018. The sequential increase was primarily related to production curtailments made late last year. While there were no curtailments in the latest quarter, low prices and a lack of takeaway have prompted the company to repeatedly curtail volumes in recent years.

NFG, an integrated energy company with various business segments including a natural gas utility, is looking to its upstream and midstream subsidiaries to drive growth, making the Northern Access delays an issue and the Transco expansion that much more important. Transco does not have facilities in the WDA, or more specifically within the Clermont/Rich Valley (CRV) area that encompasses Elk, McKean and Cameron counties, PA, from where Seneca wants to ship.

NFG would build out the first leg of the expansion to get gas from the CRV to an interconnection with Transco in Leidy, PA, by enhancing a modernization project already planned for the National Fuel Gas Supply Corp. system. The modernization project is now expected to cost $250-300 million. Transco would then enter a long-term agreement with NFG to lease that leg of the expansion.

“We expect the transportation rate on this project will be extremely competitive to the Northern Access rate,” Tanski said. He added that if Northern Access ultimately moves forward, then Seneca has enough acreage and a large enough well inventory to fill both pipeline projects. That would likely require more capital and financing in what Tanski said would be a “good problem to have.”

Beyond the midstream, Seneca continued to press ahead with its transition to full Utica Shale development in northwest Pennsylvania during the second quarter. It now has nine wells online, including a test well in Elk County in an area NFG calls Boone Mountain that’s about 30 miles south of its other Utica wells in the CRV. After more than 30 days online, that test well is producing at a rate consistent with the others farther north that have proven themselves.

“We have additional appraisal drilling to conduct between Rich Valley and Boone Mountain, but if results remain consistent, this will open up a new Utica development corridor,” Seneca President John McGinnis told financial analysts during NFG’s earnings call on Friday.

As it’s grappled with the Northern Access delay, management said it has pressed for marketing gains, which have paid off for the company. “From a marketing perspective, we’re having continued success in locking in firm sales for Seneca’s production for meaningful periods of time at economic prices,” McGinnis said. “We’re not substantially relying on the spot sales market.”

To fill those firm sales commitments, Seneca plans to soon add a third rig for redevelopment opportunities on existing pads in the WDA. The upstream segment is increasing its capital expenditures guidance for fiscal year 2018 and now guiding for $350-370 million from a previous estimate of $300-330 million.

Similarly, the company has been working in its Eastern Development Area in north-central Pennsylvania to ramp up volumes ahead of the Atlantic Sunrise expansion start up. Seneca has 190 MMcf/d committed to that pipeline. It has lowered annual production guidance and now anticipates an Aug. 1 in-service date. McGinnis said Seneca would adjust its production schedule accordingly. NFG’s fiscal year ends in September.

The company also lowered its production guidance after closing the sale of its Sespe field assets in Ventura County, CA, for $43 million. The oily assets were too remote from the company’s primary oil production operations in the San Joaquin Basin in Kern and Fresno counties, CA. The Sespe field was also becoming expensive, McGinnis said, with declining production and new permits increasingly hard to come by as the properties are in the Los Padres National Forest, where a Condor sanctuary is located.

Most of the company’s other business segments, including pipeline and storage, gathering and its utility business, all saw earnings increase. The utility segment’s earnings were up 30% y/y on colder weather in Pennsylvania and New York.