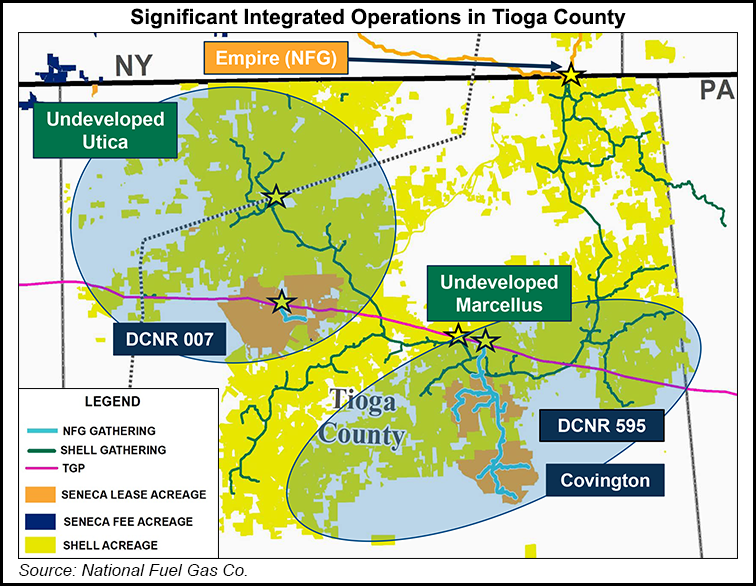 Not included in the sale is the supermajor’s Pennsylvania Petrochemicals Complex, an ethane cracker now under construction.

“Divesting our Appalachia position is consistent with our desire to focus our Shales portfolio,” said Shell’s Wael Sawan, upstream director. “While we maximize cash in the current environment, our drive for a competitive position in shales continues. It is a core part of our upstream portfolio along with the deepwater and conventional oil and gas businesses.”

Shell “continues to have attractive opportunities in its Shales portfolio both inside and outside the United States, which we operate with a focus on driving down costs while increasing efficiency in all areas of our business.”

The Anglo-Dutch major has been whittling down its portfolio worldwide, with a big focus on building liquidity during the Covid-19 pandemic. In North America, the focus also has been on deepwater projects and liquids-heavy plays, including the Permian Basin.

“National Fuel’s acquisition of these high quality assets in one of the most prolific areas in Appalachia will provide the company with a unique and highly strategic opportunity to further its integrated development approach in the region,” said CEO David P. Bauer.

“With significant economies of scale provided by Shell’s large Tioga County acreage footprint, which is contiguous to our existing development areas, along with significant, integrated gathering facilities, and valuable pipeline capacity, Shell’s assets are a perfect fit for the company’s diversified business model, and provide meaningful synergies with our existing operations.”

The deal adds more than 200,000 net acres in Tioga County to NFG’s portfolio, with net proved developed reserves estimated at 710 Bcf. At closing, the assets alone are forecast to have flowing net production of 215-230 MMcf/d.

In addition, NFG would take over 142 miles of gathering pipelines and related compression, 100-plus miles of water pipelines, and associated water handling infrastructure.

“Given their contiguous nature, the company expects to fully integrate the assets into its existing operations in Tioga County,” NFG management said. Operating cost synergies are expected in the exploration and production segment with cash operating expenses forecast to decline by 5-8 cents/Mcfe.

The deal, one piece of nearly $5 billion in asset sales planned by Shell, is scheduled to be completed by the end of July. NFG has an option to pay all cash or partially in cash and with a trade of up to $150 million of common stock at an adjusted price of $38.97/share over the next two years. The transaction is not contingent on financing conditions, NFG noted.

NFG has executed additional New York Mercantile Exchange gas hedges in connection with the transaction. For fiscal 2021 (FY2021), hedges were put in place that are equivalent to 75% of acquired proved producing production at average prices of $2.71/Mcf. For FY2022, it has hedges on 55% of output at an average price of $2.54.

To reflect the purchase, NFG has updated its FY2020 production guidance to 245-255 Bcfe. Gathering segment revenue guidance is set at $140-150 million. The purchase also is expected to increase FY2020 earnings to $2.80-3.00/share, a 5-cent increase from the midpoint of prior guidance.