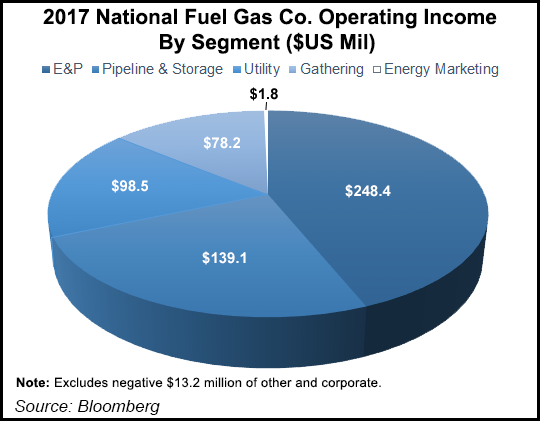 Gamco and its affiliates, which own more than 7% of NFG’s common stock, sent a proposal for NFG to include in the proxy statement for the annual shareholder meeting in March. Gamco wants shareholders to approve a resolution to participate more actively in “the rapidly consolidating natural gas local distribution sector.”

NFG is a diversified company that operates in upstream, midstream and downstream segments, but the local distribution company (LDC) utility segment is undervalued, according to Gamco. Several multi-billion dollar acquisitions have occurred in recent years, and Gamco cited examples that included Dominion Energy Inc.’s of Questar Corp., AltaGas Ltd.’s of WGL Holdings Inc. and Southern Company’s of AGL Resources.

“Gamco believes that NFG, given its 100-plus years knowledge of this industry, should use its [LDC] as a currency, including such financial engineering alternatives as a tracker stock or other value-creating mechanism, while maintaining control of the entity and its use of cash flow,” the firm said.

Largely outdated, a tracking stock is issued by a company to reflect a particular segment. A tracking stock would allow NFG to keep control of the utility without having to sell it or create a separate entity. Gamco said that would allow the market to better value the utility. Gamco has charged in the past that NFG is not realizing enough value from the business, pushing the company unsuccessfully to spin it off into a seperate company.

NFG’s board urged stockholders to vote against the proposal, noting the company is more concerned with creating sustainable, long-term value in regular reviews of its performance.

“Given the current high deal valuations evident in recent LDC transactions and incremental complexity associated with financial engineering such as tracking stock, the board does not believe it should pre-commit or appear to pre-commit to entering into an LDC transaction and associated financial engineering on the assumption that such a transaction would increase stockholder value,” the company wrote in its proxy statement.