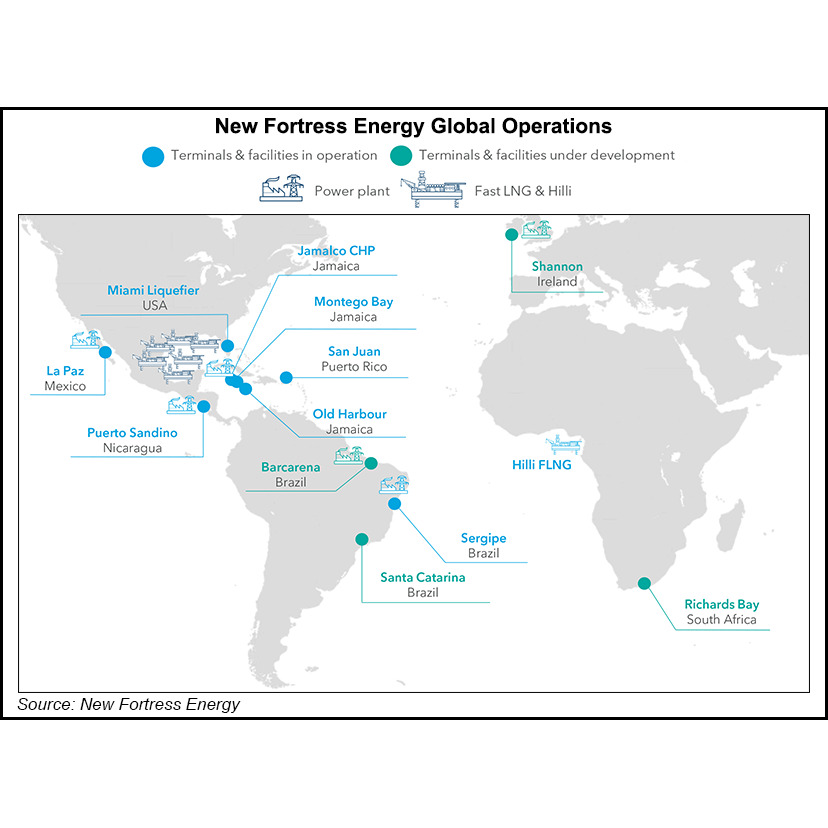 This is in addition to the company’s first FLNG project currently under development offshore Louisiana.

At the port of Altamira, NFE plans to deploy up to three FLNG units, each with a capacity of 1.4 million metric tons/year. Feed gas for these units would be sourced from Texas via the 2.6 Bcf/d Sur de Texas-Tuxpan offshore pipeline, for which Mexican utility Comisión Federal de Electricidad (CFE) is the sole capacity holder.

NFE management said that only 20% of the capacity on the offshore pipeline was being used, making it a win-win for both the CFE and NFE.

“In exchange, NFE will compensate the CFE for their cost of transportation and the CFE will receive 10%, 15% and 20% for the first, second and third assets, respectively, which brings Mexico LNG cargos for use as they continue to transition to gas-fired power,” Guinta said during the call.

Last year, NFE unveiled the technology for the projects, which take about 14-16 months to be built, management said. While Mexico plans numerous traditional liquefied natural gas projects on its West Coast, this would be the first on its eastern shores.

Another FLNG unit would be deployed at the gas-rich Lakach offshore field, where NFE and Pemex plan to jointly complete seven wells that Petróleos Mexicanos (Pemex) has already drilled.

CEO Wesley Edens said the Pemex partnership was the “first time that we’ve actually obtained molecules in the ground. Now we’re not taking ownership of them. We’re basically going to complete the wells,” he said.

Edens added that the natural gas would go onshore and also to the FLNG. He said the integrated model of being involved in the upstream is “a very, very logical extension for us right now.”

In addition to the LNG export projects, NFE and CFE also in the second quarter reached a separate agreement through which NFE will expand and extend its natural gas supply commitments to Baja California Sur via the Pichilingue regasification terminal. NFE supplies gas from the terminal to CFE power plants in the remote peninsular region. NFE also has agreed to sell its own 135 MW gas-fired power plant there to CFE.

NFE also operates regasification terminals and natural gas-fired power plants that it purchases LNG for in the Caribbean and South America. It has similar projects under development in Europe and Asia.

In total, NFE has 37 mmty of regasification capacity, 3 GW of power capacity, and 8 mmty of FLNG liquefaction under development across the globe.

In Brazil, the company’s Santa Catarina import terminal is expected to be complete in the fourth quarter, with operations expected to start in 2023. NFE has also commenced construction on a 605 MW natural gas fired power plant in Bacarena.

In the Netherlands, the company agreed to lease a floating storage and regasification unit to a new terminal, with startup this quarter. A terminal and power plant in Ireland also continues to progress, management said.

The company is also working on developing hydrogen projects. Edens said the Inflation Reduction Act in the United States puts the country “squarely into the gun size of being the world leader in the production of hydrogen.”

NFE reported a net loss of $178 million (minus 81 cents/share) in the second quarter, compared with a loss of $2 million (minus 3 cents) in the same period last year. This included a non-cash impairment charge of $315 million associated with an asset sale.