Although it remains in the early stages of development more than two years after it was announced, the NEXUS Gas Transmission (NGT) system is facing growing resistance from communities along its proposed path in Ohio. 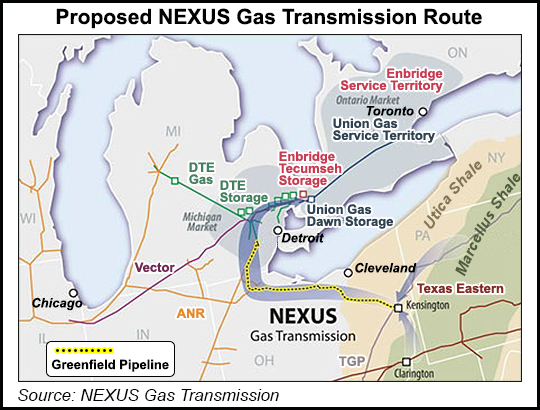 The 250-mile line would connect natural gas from the Utica and Marcellus shales with markets in Ohio, Michigan and Ontario, Canada (see Shale Daily, Sept. 5, 2012). It is expected to originate at the heart of the Utica Shale boom in Carroll County, OH, and wend through 10 other counties in the state to an interconnect in Michigan that will utilize the existing Vector Pipeline system, which will take the Appalachian gas to Ontario.

The project is not expected to be in service until late 2017, according to backers Spectra Energy Corp., DTE Energy and Enbridge Inc. But they have started contacting landowners that will aid in development of the pipeline, according to the project’s website (see Daily GPI, May 7). That has spurred strong opposition from northeast to western Ohio, where landowners are organizing against the project and where some townships are passing resolutions against it.

“We are organizing to have the pipeline rerouted to a more uninhabited route, which we have suggested to Spectra/NEXUS,” said one group in a recent post on a Facebook page established to aid organization efforts. “First and foremost, this is a property rights issue…we do not want this pipeline on our properties.”

Given that NGT is an interstate pipeline and the Ohio Department of Natural Resources is responsible for the state’s review, local approval and opposition are largely symbolic. But like other pipeline projects facing opposition in the basin and elsewhere across the country, that hasn’t stopped some residents in Ohio from pushing their elected leaders to speak out against NGT.

Organizers from York Township, in Medina County, OH, have appointed team leaders in four other townships there to help spread information about the NGT plan and gather support for opposition against it, according to local news media reports. Similar groups are forming in nearby Stark, Summit and Lorain counties, while efforts are also under way in western Ohio’s Fulton County and as far north as Michigan.

Last month, York Township passed a unanimous resolution “to refrain from authorizing or taking any actions that would facilitate or otherwise be supportive of the construction of the NEXUS gas transmission pipeline” within township limits. On Wednesday, New Franklin City Council in Summit County, OH, also passed a resolution opposing the pipeline, with councilors there planning to send it to state and county officials.

Spectra, DTE and Enbridge would each have an equal ownership stake in the pipeline. Nexus spokesman Arthur Diestel said the project remains in the early stages of development. The companies have yet to engage federal regulators, with the pre-filing process set to begin in the coming weeks, he said.

NGT only recently sent notification and survey letters to landowners in affected areas. Diestel said surveyors are currently working to determine a final route for the pipeline, which could take at least a year. Once a route is determined, a formal application would be sent to the Federal Energy Regulatory Commission.

“NEXUS is still in the process of determining a viable pipeline route that mitigates impacts to landowners and the environment and meets, or exceeds, customer needs, constructability requirements and safety regulations,” he said. “NEXUS will continue to meet with landowners, agencies and other stakeholders to discuss the project and to seek input on the proposed routing.”

A 600-foot wide study corridor along the pipeline’s tentative path is currently being surveyed. About 60% of the pipeline is expected to follow existing rights-of-way already in place for utilities. When construction begins, Diestel said, workers will need a roughly 100-foot wide corridor to build within, and after that’s complete, the pipeline will require a 50-foot permanent easement.

The system is expected to be in service by late 2017.