NextDecade Corp. has filed an application with FERC to include carbon capture and sequestration (CCS) systems at its proposed Rio Grande liquefied natural gas (RGLNG) export project in Brownsville, TX. 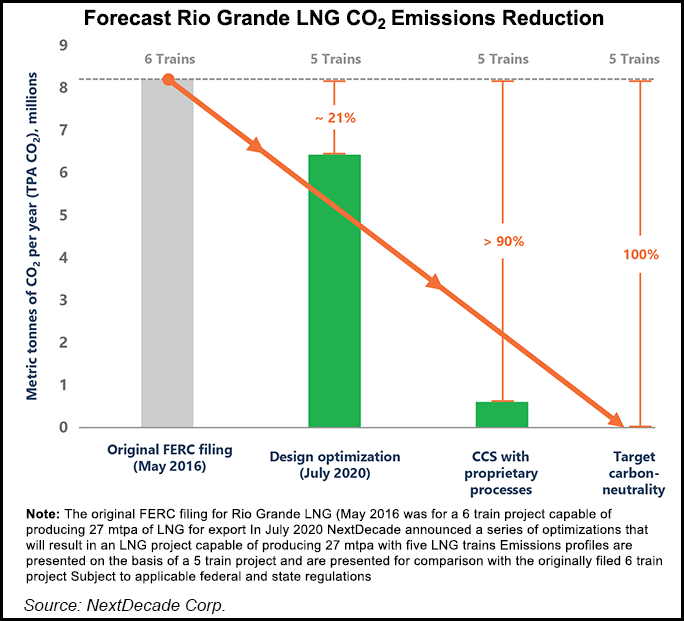 The company is seeking to modify the Federal Energy Regulatory Commission’s 2019 authorization to site, construct and operate the terminal. It has requested a “limited amendment” to the authorization so that it can incorporate CCS technology into the approved site and design.

“RGLNG respectfully requests expeditious approval of this limited amendment, so that RGLNG may incorporate the CCS systems into the design of the RGLNG terminal without delay, and — consistent with the climate goals set forth under the Paris Agreement — proceed to provide world markets access to what RGLNG believes is the greenest LNG in the world,” the company said in its filing last week.

Construction and operation of the CCS systems at Rio Grande would allow the terminal to capture and sequester 90% of the carbon dioxide (CO2) produced. Once captured, the CO2 would be transported via pipeline to a Class VI carbon dioxide injection well regulated by the Environmental Protection Agency and relevant state agencies.

NextDecade said last year it would redesign the terminal to include CCS technology. International buyers have more closely scrutinized the environmental impacts of natural gas as they work to meet strict climate targets at home. NextDecade also launched a subsidiary to focus on CCS last year.

The subsidiary was formed after the French government blocked NextDecade’s offtake deal with utility Engie SA over concerns about emissions in the Permian Basin and Eagle Ford Shale.

NextDecade’s decision to utilize CCS could expand the project’s timeline, especially depending on the scope of FERC’s review to modify Rio Grande. The Class VI injection well permitting process could also take time.

Just two Class VI wells have been permitted at the Archer Daniels Midland Co. ethanol plant in Illinois after a six year permitting process, according to Clear Path, a nonprofit focused on advancing policies that help cut emissions in the energy and industrial sectors.

Last year, NextDecade pushed back a final investment decision (FID) on the Rio Grande project until 2021. The company is still targeting an FID this year.

At full capacity, the terminal would have the ability to produce 27 mmty of LNG, but the company is focused on sanctioning two trains with a 11 mmty capacity. It has signed just one contract to supply Royal Dutch Shell plc with 2 mmty of LNG.