U.S. liquefied natural gas (LNG) developer NextDecade Corp. is teaming up with Project Canary to measure greenhouse gas (GHG) emissions associated with cargoes from the planned Rio Grande export facility in Texas, an effort the companies said is the first of its kind in the global LNG industry. 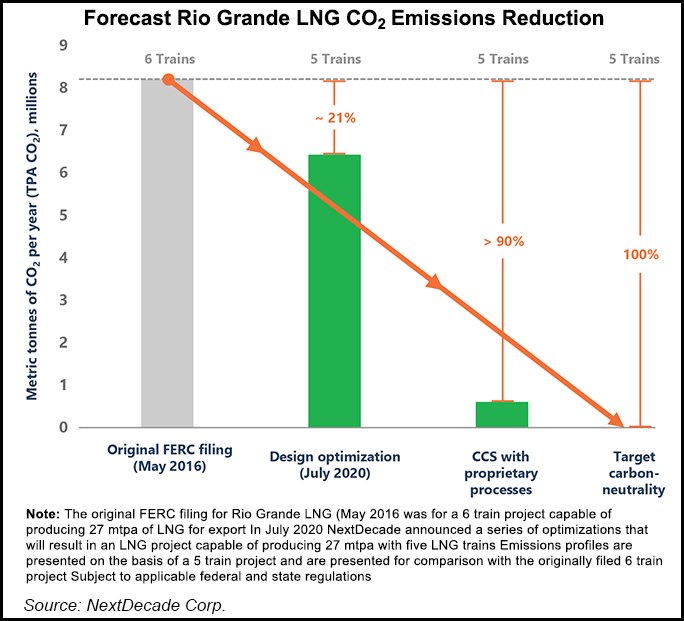 The joint pilot project would focus on monitoring, reporting and independent third-party measurement and certification of the GHG intensity of cargoes to be sold from the 27 million metric tonnes/year Rio Grande LNG export facility in the Port of Brownsville, TX.

NextDecade has taken a number of steps of late to lower Rio Grande LNG’s carbon footprint following reports last year the French government had nixed a proposed offtake deal with utility Engie SA over concerns about emissions. The company has outlined plans to achieve carbon neutrality at the Brownsville site, and recently launched its NEXT Carbon Solutions subsidiary to pursue one of the largest carbon capture and sequestration projects in the United States.

“Project Canary’s independent measurement and certification platform will provide transparency and give confidence to our customers who are increasingly focused on securing low greenhouse gas-intensive LNG. Reliable, competitively priced LNG and responsible environmental stewardship are not mutually exclusive, and we are pleased to work with Project Canary to establish a new and higher standard for the supply of low-GHG LNG to markets around the world.”

During the pilot, Project Canary would deploy its TrustWell certification process at Rio Grande LNG to confirm each element of the natural gas value chain, including upstream supply, has achieved low emissions targets and used “the highest standards of environmental performance and social responsibility,” the companies said.

Trustwell certification scores across four primary categories of responsibility: air, water, land and community. It assigns ratings based on independent review and “rigorous” data analysis, the companies said. The certification has been involved in over 85% of responsibly sourced gas transactions in the United States to date.

The process would lead to the development of a responsibly sourced natural gas supply chain from leading producers in the Permian Basin of West Texas and southeastern New Mexico and the Eagle Ford Shale of South Texas, the companies said.

Project Canary has completed more than 5,500 TrustWell certifications, with over 1,000 in process. It expects to have about 400 real-time emissions monitoring units deployed by the middle of 2021.

“The differentiated market for responsibly sourced gas is expanding rapidly on a global scale as customers, investors and regulators seek, push for and reward energy produced with the highest environmental standards,” Romer said Monday.

The pilot would also lead to “independent, third-party certification of the GHG intensity of LNG,” the companies said.
NextDecade’s announcement comes as LNG providers around the world are looking to lower their carbon footprints in line with demands from global buyers. Cheniere Energy Inc. said earlier this year it would provide carbon certificates for each of its cargoes, and Tellurian Inc. CEO Octavio Simoes recently told NGI his company may take a similar approach. Meanwhile, the sponsors of the proposed G2 Net-Zero LNG facility in Louisiana, like NextDecade, plan on making their facility carbon neutral.