NextDecade Corp. announced its third long-term contract with a Chinese company for liquefied natural gas (LNG) offtake as it prepares to possibly sanction the first two trains of its Rio Grande LNG project this year. 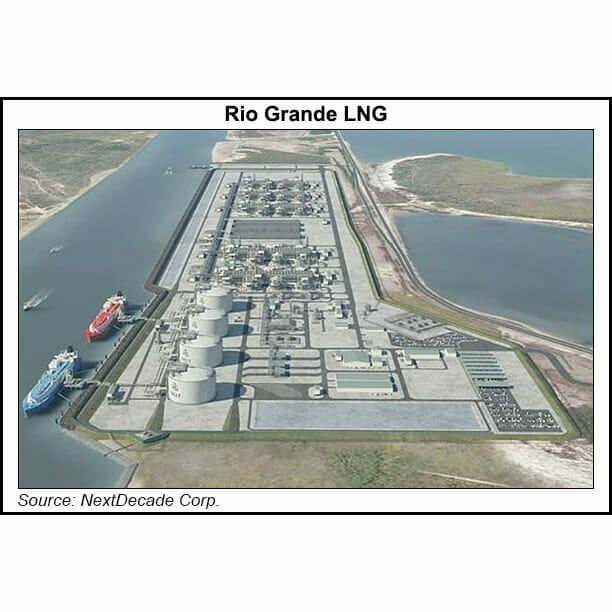 Houston-based NextDecade disclosed Tuesday it has clinched a 1.0 million metric ton/year (mmty), 20-year sales and purchase agreement (SPA) with a trading subsidiary of China Gas Holdings Ltd. Under the SPA, China Gas could receive LNG from the second train of NextDecade’s Brownsville, TX project on a free-on-board basis starting in 2027. Volumes would be linked to Henry Hub.

The SPA with China Gas marks the fourth long-term contract for offtake from Rio Grande LNG and the third with a Chinese client this year. NextDecade CEO Matt Schatzman said China Gas’s interest in the project “demonstrates the continued acceleration” of commercial momentum for the project.

NextDecade is aiming for a final investment decision on Rio Grande’s first two trains in the second half of the year, according to its June investors presentation.

So far, 7.75 mmty of capacity from the project’s first two trains – more than 70% – has been sold or placed under a heads of agreement, according to the company. At full scope, NextDecade assumes Rio Grande LNG could have five trains capable of chilling 27 mmty of LNG for export.

NextDecade secured the project’s first agreement with Shell plc in 2019, but contracting has accelerated since the beginning of the year. The company inked its second offtake agreement in March with Chinese utility Guangdong Energy Group Natural Gas Co. Ltd. In April, NextDecade announced a 20-year, 1.5 mmty deal with China’s Enn LNG Pte Ltd., a Singapore-based subsidiary of Enn Natural Gas Co. Ltd. It also saw the return of interest from Europe in May with a 15-year, 1.75 mmty SPA with France’s Engie SA.

Market volatility spurred by Russia’s invasion of Ukraine has sparked more long-term contracts for LNG this year, with most being struck by Asian buyers. Chinese firms especially have ramped up contract announcements during the first six months of the year, further growing their already substantial LNG portfolios.

China Gas, based in Hong Kong, is one of the country’s major suppliers of natural gas and serves more than 43 million customers, according to the company. It inked a long-term deal last month with Energy Transfer LP for 0.7 mmty from the proposed Lake Charles LNG project.