It could be a year or more before any additional Rogersville Shale production data is released by Kentucky and West Virginia regulators, as operators have either been granted or are expected to ask for confidentiality to protect that information, state officials said. 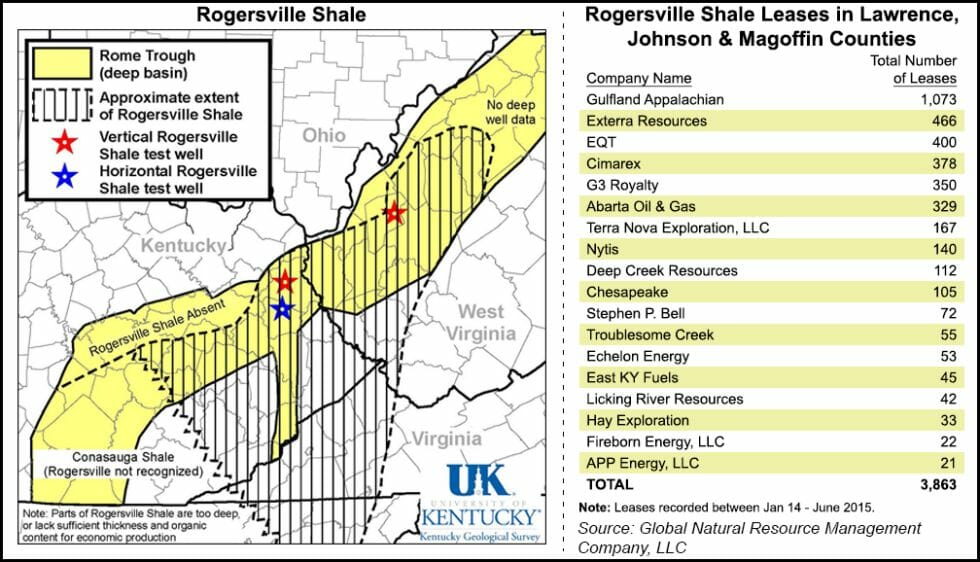 Just four Rogersville wells have been permitted for oil and gas production in both states since 2013. But speculation persists after a disappointing vertical test was released last month from one of those wells drilled by a Cimarex Energy Co. subsidiary in Lawrence County, KY. A land grab is also said to be winding down with the drop in commodity prices.

EQT Corp. in April permitted the play’s first horizontal test in nearby Johnson County, KY, through subsidiary Horizontal Energy Technology Inc. Kentucky Energy and Environment Cabinet spokesman Dick Brown confirmed that as of Sept. 16 the EQT well was still being drilled and added that the state has not yet received any records from it.

But just as Cimarex was granted confidentiality last year when it submitted its well data to the state, EQT is likely to do the same. After it submits records from the first horizontal test of the Rogersville, Brown said the company could request up to a year of confidentiality under state law. Completion reports submitted to the states typically contain valuable insights about a well, including initial flow rates, how much water and completion fluids were used, the type of proppant, total depth and other data.

In West Virginia, state Department of Environmental Protection spokeswoman Kelley Gillenwater said the wait could be even longer before details are released about the sole well permitted for the Rogersville there. In Putnam County, in western West Virginia, Cabot Oil & Gas Corp. permitted a well for the Rogersville in June 2014. Gillenwater said that well has been drilled, but said the state has received no production data.

In West Virginia, as soon as a well is turned to sales and hooked up to a meter, a company must begin tracking monthly production for submission to the state by the end of the first quarter each year. It’s unclear if Cabot has flowed that well, Gillenwater said, adding that the company could elect to withhold production data under its three-year confidentiality agreement.

Cabot, Cimarex and EQT have not commented about their exploration and production efforts in the Rogersville.

Located in a deep sub-basin called the Rome Trough, the Rogersville is one of six formations in the Conasauga Group, which also includes two other shales. There’s been limited production from the group south of Kentucky, but the organic rich Rogersville is thought to be prospective in Kentucky and West Virginia.

It’s unclear how long the well flowed for, but Cimarex’s Sylvia Young No. 1 well showed initial test volumes of only 19 b/d of oil and only 115 Mcf/d of gas, according to a completion report released by the Kentucky Division of Oil and Gas (see Shale Daily, Aug. 20). The Sylvia Young was the first modern test of the shale since the 1970s when it was cored by an ExxonMobil Corp. predecessor company (see Shale Daily, July 24).

From January to June 2014, in Eastern Kentucky’s Magoffin, Johnson and Lawrence counties, 3,863 leases were signed for the Rogersville, according to data compiled by Wesley Cate, executive vice president of the mineral management firm Global Natural Resources Management Co. The leases have primarily been signed by land brokerage firms, along with a handful of other small and large producers such as Chesapeake Energy Corp. The leasing activity appeared to peak in March before declining.

“I do know that [leasing] activity has dropped off somewhat with this pricing,” Cate said Wednesday. “There’s still consistent development in the state’s shallower plays, and the big guys are still out there in the Rogersville.” But he added that speculation and mineral buying continues at a slower pace. Cate said he’d received three calls about Rogersville mineral rights this week alone.

There could also be up to four other unknown operators gathering data about the Rogersville. State records show that four stratigraphic test permits have been issued in Kentucky for the formation, but the state does not release operator names with those permits.